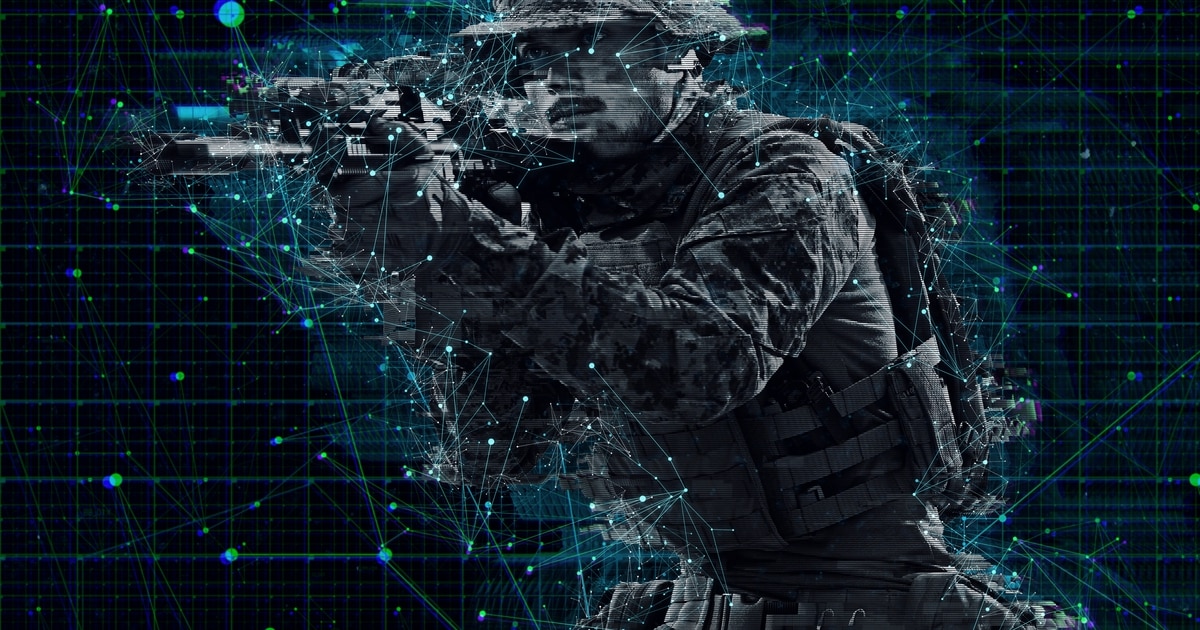 The second lieutenant moves his platoon up a densely wooded hill. He is grimly aware that he may be ambushed from above, but his orders are to secure the ridge with minimal casualties. He orders one squad to advance to make contact with the smallest unit possible, leaving two squads and a weapons squad out of direct fire contact in order to maintain his options. Suddenly, the platoon leader hears the crack of machine gun and small arms fire from above. His integrated visual augmentation system (IVAS) sensors reveal enemy forces concealed in the darkness, while also triangulating their locations through the aimpoints of the other soldiers in contact, whose weapons are fully instrumented.

He notifies his chain of command that his element has been engaged and from which direction through an interactive map symbology display linked to his IVAS. It’s time for a decision: direct his outlying squads to attempt to outflank the ambush, withdraw, or call for supporting fires. Knowing fire support is available, he decides to combine the latter two courses. He gives the order to pull back and issues a call for fire. The platoon leader automatically transmits the enemy’s grid coordinates to the fire support team. The company’s unmanned aerial vehicle indicates the enemy is retreating. He orders a renewed advance.

Is this scenario real or science fiction? Neither. It’s a training simulation of what the U.S. believes the next war will look like. The Department of Defense is exploring how new technologies will dramatically improve the way the U.S. military prepares for tomorrow’s battlefields. The end result will be a synthetic training environment that leverages next generation artificial intelligence, as well as augmented and virtual reality to heighten situational awareness, command and control, and combat power.

Such an optimized training environment must include a database populated with varying operational landscapes, terrains and threat levels. The idea is to create a “marketplace” of content and threat behavior that mimics the complexity of future combat. Given the multitude of potential joint all-domain battlefield environments in which our soldiers could one day find themselves, such flexibility will pay dividends. Moreover, it’s not hard to imagine future soldiers using the systems described above in actual combat, and the closer training approximates combat, the better.

Combat in megacities offers a good example of the value of synthetic training. Smaller sized cities already present a multitude of unique war-fighting challenges. These challenges are magnified and multiplied in dense interconnected urban environments where, for example, calling an airstrike on a building could create unanticipated cascading effects, endangering troops or civilians. Emerging threats (such as swarming drones) or nonkinetic effects (such as cyberattacks) complicate these already tricky dilemmas. Moreover, no physical training environment can mimic the scale or density of the urban terrain. A synthetic training environment should ultimately have the ability to spin-up virtual dense urban terrains from across the globe, so soldiers can become acclimated to tomorrow’s battlefields.

There is an additional benefit to such an open-systems approach to virtual training. Through the coalition joint all-domain command and control (CJADC2) concept, U.S. military leaders seek to connect sensors across joint and coalition forces to achieve true interoperability. As the services obtain a wealth of data about the digitization of interconnecting weapons, vehicles and personnel, this information could be fed into a synthetic training environment for training purposes. By simulating new systems and weapons, military planners could also assess how they perform against a range of challenges, informing both concept and technical development. A synthetic environment provides the only high-fidelity, information-rich training environment for systems of systems combat prior to conflict.

Until recently, traditional simulations have lacked many of the attributes a synthetic training environment requires — including scale, composability and the ability to anticipate the changing character of combat. The video gaming industry, however, has been perfecting the art of virtual warfare for years. Today, many video game companies are incorporating artificial intelligence into their games to account for cascading effects, such as sprawling blackouts caused by a power station attack. They are offering players digital worlds that possess scale and density, and possess adaptability that allows objects to be used in ways for which they may never have been intended. Indeed, in many ways the technology offered by video games transcends most military training applications.

As our military leaders explore methods to improve soldier lethality and expedite training through a synthetic training environment, the Department of Defense should expand its partnerships with nontraditional vendors to bolster its joint domain operations training vision. The video gaming industry, in particular, possesses the technical talent and insights needed to make a synthetic training environment possible. Leveraging commercial gaming technologies in defense may make what seems like science fiction a near-term reality.

Adm. James “Sandy” Winnefeld retired from the U.S. Navy in 2015 as vice chairman of the Joint Chiefs of Staff and the United States’ No. 2-ranking military officer. He is a senior nonresident fellow at Harvard’s John F. Kennedy School of Government and is chairman of the Georgia Tech Advisory Board. He serves on several boards and in advisory positions in the business community, including at Improbable LLC, Expanse, SpiderOak Mission Systems, Raytheon and Naval Postgraduate School.

Lt. Gen. Ken Tovo, retired from the U.S. Army, is president and CEO of DOL Enterprises Inc., a strategic planning and risk management consulting firm. He serves on several boards and in advisory positions, including at the Green Beret Foundation, SpiderOak Mission Systems, Horizons Infinis LLC and The Patriot Foundation.

Myanmar military occupies hospitals and universities ahead of mass strike

The Biggest Security Threats to the US Are the Hardest to…