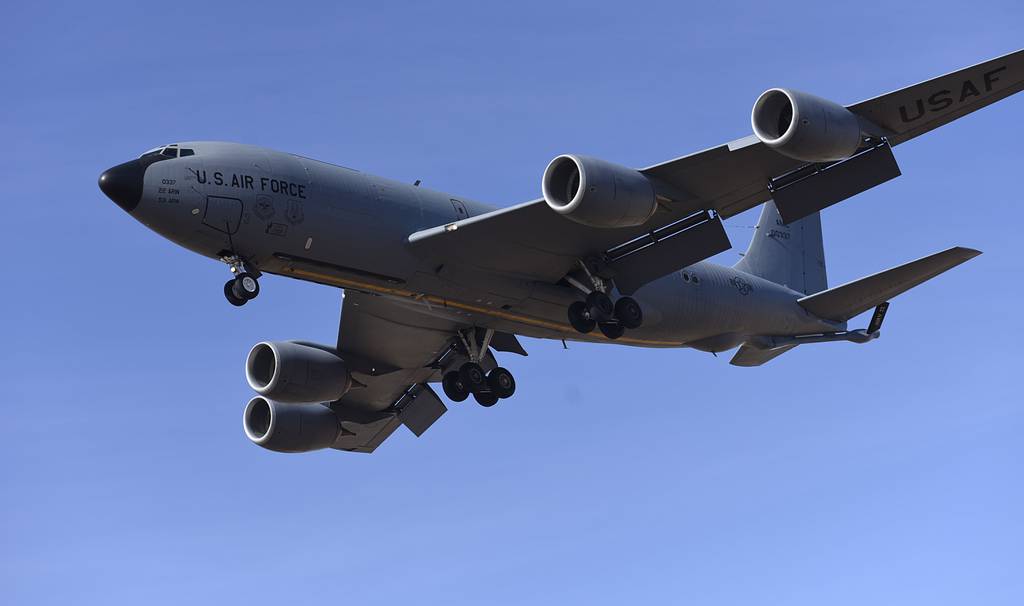 WASHINGTON — As the commercial airline and telecommunications industries scramble to limit the potential safety risks to aircraft from a rollout of new 5G networks, it may be months before the U.S. military has a handle on whether, or how big, of a problem this might be for its own planes.

At the center of the controversy is whether the deployment of 5G networks, operating along a frequency known as the C-band, will interfere with radar altimeters used by military, civilian and commercial aircraft and helicopters. These altimeters are used to measure the distance between the aircraft and the ground.

For the military, they are particularly necessary when mobility aircraft such as cargo planes or tankers land in adverse weather conditions. If the pilot’s visibility is poor during such a landing, he or she would have to use altimeters to measure how far off the ground the aircraft is during the approach, and a flawed reading could lead to a crash.

Verizon and AT&T began activating their 5G networks on Wednesday, promising much faster wireless service speeds than the previous 4G network. But amid a growing outcry from the commercial airline industry, the companies on Tuesday announced they would temporarily limit the deployment of new 5G networks near some airports. Some international airlines announced plans to cancel certain flights to the United States over the concern.

The Federal Communications Commission in early 2021 auctioned off the rights to operate 5G transmissions in the C-band, or 3.7-3.98 GHz, primarily to Verizon and AT&T. That is close to the 4.2-4.4 GHz spectrum radar altimeters use. The airline industry trade association Airlines for America said it has brought concerns about the potential for interference and safety risks to the FCC several times since 2018, to little avail.

The Air Line Pilots Association said in a Jan. 18 statement interference from 5G networks operating on this spectrum could cause aircraft to lose their radar altitude information or mistakenly tell the pilots the wrong altitudes, and could lead to crashes.

In a Jan. 17 letter to Transportation Secretary Pete Buttigieg, Federal Aviation Administration head Stephen Dickson, FCC chairwoman Jessica Rosenworcel and the White House, Airlines for America urged that the new 5G networks not be activated within two miles of major airports. Failing to do so could result in “significant operational disruption to air passengers, shippers, supply chain and delivery of needed medical supplies,” reads the letter, which was also signed by the heads of major commercial aviation firms such as American Airlines, Delta Airlines, UPS and FedEx Express.

The military decided about a year ago that instead of trying to block the auction of the C-band spectrum, it would work to limit the potential interference with its aircraft’s systems.

In a Tuesday email, Air Force spokesman Capt. Patrick Gargan said the Defense Department is working with its FAA counterparts on the 5G issue.

Gargan said the Pentagon stood up a “Joint Interagency FiveG Radar Altimeter Interference,” or JI-FRAI, team, to develop “quick reaction tests” to determine the impact of 5G on avionics.

But those tests will not provide any answers soon. Gargan said testing is scheduled to begin this month, and the results are expected late this summer.

Gargan also said military services have issued bulletins to the field and to fleets to alert aircrews about the potential for interference, and is setting up a system for reporting interference if it happens.

The Air Force, Verizon and AT&T did not respond by press time on whether the telecommunications companies would similarly limit 5G rollout around military bases where aircraft take off or land.

“Honeywell’s radar altimeters meet all existing FAA and manufacturer certification requirements,” Honeywell spokesman Adam Kress said in an email. “Neither the agency nor manufacturers have provided any additional requirements for our equipment. If needed, we’re ready to verify compatibility of our equipment with any new requirements and we have been working with the FAA, Department of Defense and aircraft manufacturers to conduct testing of our systems in the 5G spectrum.”

The Air Force Safety Center said it had received no reports of problems with 5G interference, although the 5G networks on the C-band spectrum had only started to come online.

CNBC reported some other forms of 5G have previously been available to some Verizon, AT&T and T-Mobile customers. Those 5G services, however, are not on the C-band, which is prized for its ability to travel long distances and transmit large amounts of data.

Rachel Cohen contributed to this report.

Germany holds its ground on denying weapons for Ukraine