Marines strap missile to truck and strike target at sea 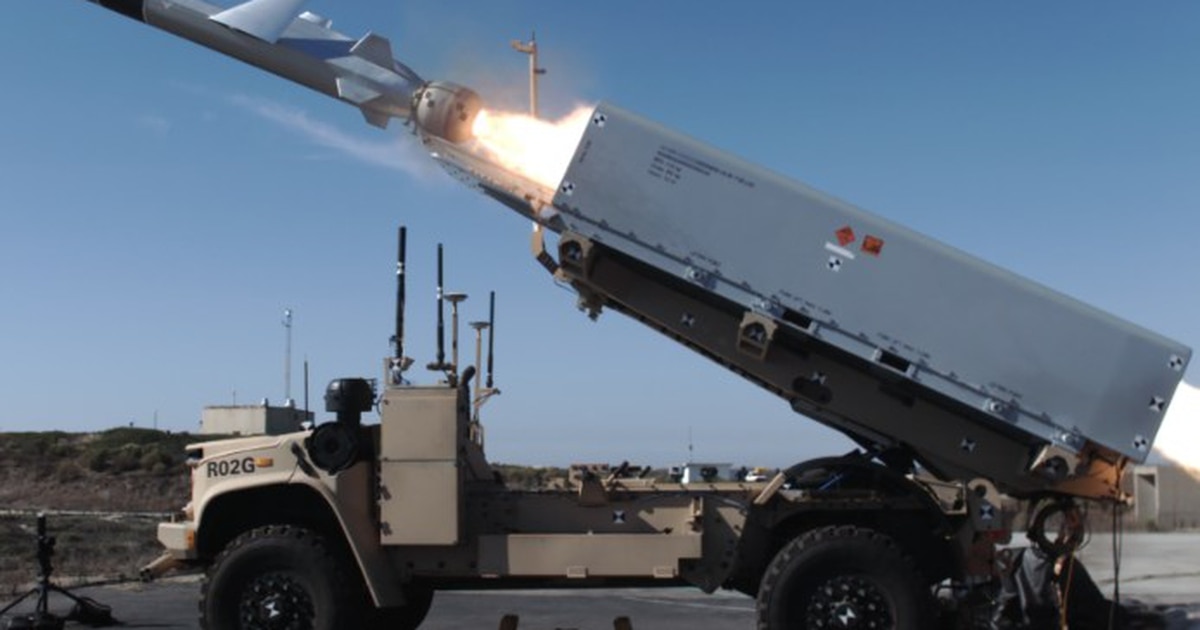 Two Marine majors and industry technicians stripped down a tactical vehicle, strapped an anti-ship missile onboard and hit a target at sea from land.

And the top Marine was quite pleased.

Commandant Gen. David Berger said in a congressional hearing Thursday that the tests were the result of the “brilliance of a couple of young officers” and industry partners.

The Marines and technicians with Oshkosh Defense took a modified, unmanned joint light tactical vehicle, removed the cab and installed a Naval Strike Missile, ground launcher and fire control system on the back.

The unmanned version is known as the remotely operated ground unit for expeditionary fires vehicle, or ROGUE.

The Naval Strike Missile already is aboard ships and the JLTV is fielded, the Marines simply combined two existing platforms to get after a problem, Berger said.

By giving us your email, you are opting in to the Marine Corps Times Daily News Roundup.

The combination is known as the Navy-Marine Expeditionary Ship Interdiction System, or NMESIS.

That test was performed recently on Point Mugu Sea Range, California, according to a Raytheon Missile and Defense statement.

“Our Naval Strike Missile is a vital weapon for denying enemies the use of key maritime terrain,” said Kim Ernzen, vice president of Naval Power at Raytheon. “This test further demonstrates our partnership for advancing the Marine Corps’ modernization priorities of enabling sea control and denial operations.”

Berger told representatives at the hearing that this kind of capability helps Marines support Navy operations.

“Now we can move this around on vessels, put it ashore and hold an adversary’s navy at risk in order to ensure that the lines on the sea are kept open,” Berger said.

Such a system, shooting at ships from both sea and ashore, is critical for the Marine Corps’ massive force redesign. Nearly halfway through his tenure as the top Marine, Berger has pinned the Corps’ future on a smaller, more dispersed force nimble enough to deploy unseen and take out big naval targets.

Lt. Gen. Eric Smith, deputy commandant for Combat Development and Integration, has trumpeted the necessity of Marines with such systems.

In February, Smith spoke at the Armoured Vehicles Conference about work Marines were already doing with the JLTV and other targets.

“The experimentation that we’ve done now to date successfully using lightweight mounted fires ― think the back of a Joint Light Tactical Vehicle ― is killing armor at ranges, rough calculation, about 15, 20 times the range that a main battle tank can kill another main battle tank,” he said, according to the U.S. Naval Institute.

The exact range wasn’t included in the press release, but company data shows that the Naval Strike Missile can hit targets a 100 nautical miles.

Taking unorthodox measures to combine Marine weapons with or against ships is an approach the Corps has been taking for a while now.

Marine Corps Times reported in 2017 that Marines took a High Mobility Rocket System aboard the amphibious transport dock Anchorage and fired missiles to destroy a target on land 70 km away.

That effort was part of early work linking HIMARS and the F-35B to find and strike targets from multiple platforms.

Even with sensing, Marines and sailors have taken some novel approaches.

In January 2019, the Wasp-class amphibious assault ship Kearsarge with the 22nd Marine Expeditionary Unit was transiting the Suez Canal.

Drone and missile threats were, and still are, a threat in U.S. Central Command, especially at those key choke points such as the canal or the Strait of Hormuz entering the Persian Gulf and others.

The LMADIS uses two Polaris MRZR all-terrain vehicles. One is the command vehicle, the other is a sensor platform and can detect, identify, track and shoot down small aerial drones with electronic measures.