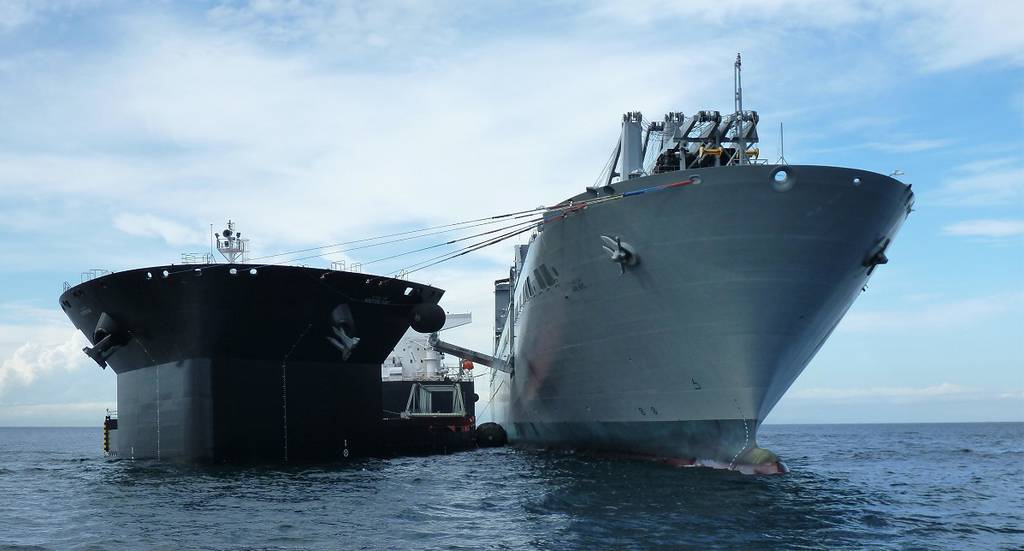 A sweeping slate of proposed ship retirements that would take nine littoral combat ships offline also would end the career of two unconventional seabasing vessels that have less than a decade in service.

But Marine Corps seabasing is far from a failed concept, current and former Marine officials said, and similar ships remaining in service are poised to take on new missions ― including support of unmanned surface vessels ― in the near future.

The recently released fiscal 2023 defense budget proposal calls for the retirement of both the Navy’s expeditionary transfer docks: the Montford Point and John Glenn. Initially called mobile landing platforms, these ships were based on civilian Alaska-class oil tankers and designed to fill a gap left by a scarcity of pricey amphibious warships.

With a flat, submersible center deck, the expeditionary transfer docks could stage and transfer Marine Corps equipment and launch it shoreward aboard landing craft air cushion hovercraft; the ships were sometimes called a pier at sea.

At $500 million apiece, it was a cheap buy, but had significant limitations from the outset: they weren’t cleared to conduct skin-to-skin moorings with military sealift vessels to transfer equipment in wave swells above three feet. And the payload, fuel capacity and accommodation space dramatically were reduced from original plans in order to cut costs.

That made the expeditionary transfer docks more challenging to use and also more risky.

The Montford Point made a 2016 appearance at the South Korean maritime exercise Ssang Yong, but the ships have otherwise kept a low profile.

“We are not fighting to keep the [ESDs],” Shon Brodie, head of the Marine Corps’ Maritime Expeditionary Warfare Division, told Marine Corps Times. “And it’s not because we don’t see that they have value. It’s just simply a list of prioritization ― we want to make sure that we can maintain the number of L-class amphibious warfare ships we need.”

Expeditionary mobile bases “have proven that they have tremendous value,” Brodie said. “We’re able to put those ships into positions where we are not able to keep a Marine expeditionary unit or amphibious ready group all the time. So special operations forces love the ESB, and they just have tremendous utility as well.”

The Navy and Marines like to keep the Puller in the U.S. 5th Fleet, staging additional equipment and aviation ― CH-53 Super Stallions or MV-22 Ospreys ― in the Persian Gulf. Other expeditionary mobile base ships, Brodie said, have navigated around the continent of Africa, transited the Suez canal and done stints in the Mediterranean, where the Marine Corps has long wanted to keep a Marine expeditionary unit.

In support of the Force Design 2030 concept, the expeditionary sea base is poised to pick up a new mission, Brodie said: escort ship for the Marines’ future long range unmanned surface vessel. Set to be autonomous and optionally manned, the long range unmanned surface vessel will be used to launch loitering munitions, or kamikaze drones, at sea- and land-based targets. And, Brodie said, it will need a “tender” ship at times for monitoring and maintenance.

Experimentation to that end is likely to begin in 2023, Brodie said.

He acknowledged that taxpayers might find it “hard to swallow” that the Navy was mothballing $1 billion worth of nearly new seabasing ships, but said the retiring expeditionary transfer docks had helped to prove the effectiveness of the seabasing concept and the value of a less-exquisite, cost-effective platform for certain amphibious operations.

The concept, Brodie said, is key to the Marine Corps’ future plans and strategy.

“I want a ship that helps me sustain the standing force,” he said. “And it has the ability to provide that sustainment, because it is a warehouse at sea.”

Not everyone is convinced it’s time for the expeditionary transfer docks to go, though.

Jim Strock, a former director of the Marine Corps Seabasing Division and now an independent consultant on maritime issues, said the 200 foot to 400 foot light amphibious warships the Corps wants to help Marines move around the littorals could use a heavy-lift platform for transport.

“The ESDs, with some modification to the ballast pumping systems, are easily repurposed as heavy-lift ships,” Strock said. “They could pick up a [Navy destroyer] if you wanted to. They’ve got a heavy-lift capacity … that should not go unexploited.”

It’s not yet clear if Congress will allow the Navy to retire the Montford Point and the John Glenn or find money in the budget to keep them in service.

More In Your Marine Corps

Most land mine use banned by US military, except in Korea

The announcement reverses a more permissive stance by then-President Donald Trump, and it concludes a review that has lasted for more than a year. Bonnie Jenkins, the State Department’s undersecretary for arms control and international security, said the new policy fulfills “a commitment that President Biden made as a candidate,” when he described Trump’s decision as “reckless.”