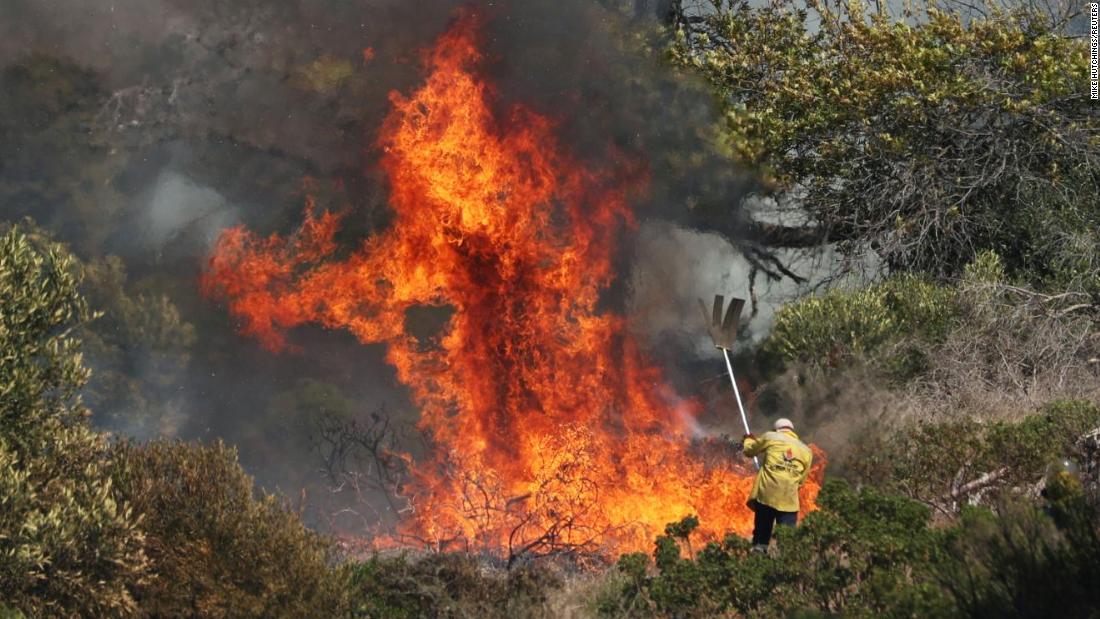 “One suspect in his thirties was taken into custody last night in the vicinity of Devil’s Peak,” the City of Cape Town said in a statement.

Authorities will investigate speculation that additional fires were started and whether the original fire was an act of arson, the statement added.

Around 150 firefighters were tackling the blaze on Monday, which began in Cape Town’s Table Mountain National Park, damaging buildings and prompting the evacuation of hikers from the city’s most famous landmark.

Adverse weather conditions are hampering firefighters efforts to put out the blaze, according to the City of Cape Town which said the blaze is “not under control yet .. wind is a major contributing factor.”

Aerial firefighting support remains grounded due to the strong winds, an update shared on Facebook said.

Two firefighters were injured and admitted to the hospital and nine structures were destroyed in the blaze, Jermaine Carelse, spokesperson for the Cape Town Fire and Rescue Services, told CNN in an email on Sunday.

The fire is now spreading in the direction of Vredehoek, located in the City Bowl, on the slopes of Table Mountain. All schools in the area have been asked to evacuate.

“All efforts remain focused on active firefighting for the moment, although the fire is hard to reach in places and we hope that aerial firefighting support can be deployed to douse the flames before it reaches the urban edge,” the City of Cape Town’s Twitter account said on Monday morning.

The fire “completely gutted” the historic Reading Room of the University of Cape Town’s Jagger Library on Sunday and forced the evacuation of students.

The Executive Director of University of Cape Town Libraries, Ujala Satgoor, said staff watched with “horror and helplessness” as the “elegant and historical” library burned.

“Some of our valuable collections have been lost, however a full assessment can only be done once the building has been declared safe and we can enter the building,” Satgoor added.

“It is tragic that literary treasures have been lost at the UCT library, but I have been informed that some of the most valuable works were saved by the quick activation of roller doors,” Cape Town’s Executive Mayor Dan Plato said in a statement.

Private homes were damaged in the fire, as well as the Rhodes Memorial restaurant and historical structures such as the Mostert’s Hill windmill, according to Satgoor.

“I wish to express our gratitude for the efforts of firefighters who have been working non-stop to bring this massive fire under control,” Plato added.

Crush the Dance Floor With These Colorful Retro Beat Machines

‘It was our children they killed’: Russian mercenaries implicated in the…