Lying down and vomiting between courses: This is how Ancient Romans would feast 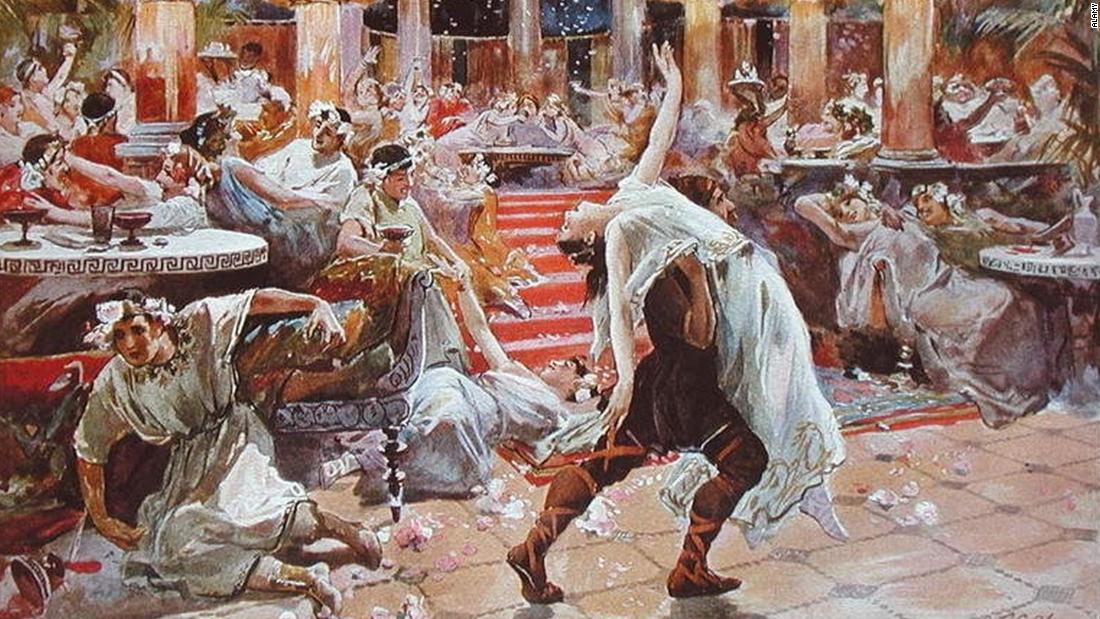 Imagine, if you will, the most glorious festive feast, with an oversize turkey, stuffing two ways, holiday ham, the requisite fixings and at least half a dozen pies and cakes. That may all sound grand — that is, until you consider the extravagant displays of the ancient Roman banquet.

Members of the Roman upper classes regularly indulged in lavish, hours-long feasts that served to broadcast their wealth and status in ways that eclipse our notions of a resplendent meal. “Eating was the supreme act of civilisation and celebration of life,” said Alberto Jori, professor of ancient philosophy at the University of Ferrara in Italy.

Ancient Romans enjoyed sweet and salty concoctions. Lagane, a rustic short pasta usually served with chickpeas, was also used to make a honey cake with fresh ricotta cheese. The Romans used garum, a pungent, salty fermented fish sauce for umami flavor in all dishes, even as a dessert topping. (For context, garum has a similar flavor profile and composition to current-day Asian fish sauces such as Vietnam’s nuoc mam and Thailand’s nam pla.) The prized condiment was made by leaving fish meat, blood and guts to ferment inside containers under the Mediterranean sun.

‘The Roses of Heliogabalus’ by Lawrence Alma-Tadema (1888) depicting Roman diners at a banquet Credit: Active Museum/Alamy

Game meat such as venison, wild boar, rabbit and pheasant along with seafood like raw oysters, shellfish and lobster were just some of the pricey foods that made regular appearances at the Roman banquet.

What’s more, hosts played a game of one-upmanship by serving over-the-top, exotic dishes like parrot tongue stew and stuffed dormouse. “Dormouse was a delicacy that farmers fattened up for months inside pots and then sold at markets,” Jori said, “while huge quantities of parrots were killed to have enough tongues to make fricassee.”

Giorgio Franchetti, a food historian and scholar of ancient Roman history, recovered lost recipes from these repasts, which he shares in “Dining With the Ancient Romans,” written with “archaeo-cook” Cristina Conte. Together, the duo organizes dining experiences at archaeological sites in Italy that give guests a taste of what eating like a Roman noble was all about. These cultural tours also delve into the eyebrow-raising rituals that accompanied these meals.

Among the unusual recipes prepared by Conte is salsum sine salso, invented by the famed Roman gourmand Marcus Gavius Apicius. It was an “eating joke” made to amaze and fool guests. The fish would be presented with head and tail, but the inside was stuffed with cow liver. Clever sleight of hand, combined with shock factor, counted for a lot in these competitive displays.

Gorging for hours on end also called for what we would consider untoward social behavior in order to accommodate such gluttonous indulgences.

“They had bizarre culinary habits that don’t sit well with modern etiquette, such as eating while lying down and vomiting between courses,” Franchetti said.

These practices helped keep the good times rolling. “Given banquets were a status symbol and lasted for hours deep into the night, vomiting was a common practice needed to make room in the stomach for more food. The ancient Romans were hedonists, pursuing life’s pleasures,” said Jori, who is also an author of several books on Rome’s culinary culture.

It was, in fact, customary to leave the table to vomit in a room close to the dining hall. By using a feather, revelers would tickle the back of their throats to stimulate the urge to regurgitate, Jori said. In keeping with their high social status, defined by not having to engage in manual labor, guests would simply return to the banquet hall while slaves cleaned up their mess.

An engraving of a banquet at the house of Lucius Licinius Lucullus from around 80 B.C. Credit: Ullstein Bild/Getty Images

Gaius Petronius Arbiter’s literary masterpiece “The Satyricon” captures this typical social dynamic of Roman society in mid first century AD with the character of wealthy Trimalchio, who tells a slave to bring him a “piss pot” so he can urinate. In other words, when nature called, revelers didn’t necessarily go to the bathroom; often the WC came to them, powered again by slave labor.

It was also considered normal to break wind while eating, because it was believed that trapping gas inside the bowels could cause death, Jori said. Emperor Claudius, who reigned from 41 AD to 54 AD, is said to have even issued an edict to encourage flatulence at the table, based on writings in the “Life of Claudius” by Roman historian Suetonius.

The comforts and privilege of wealthy men

Bloating was reduced by eating lying down on a comfortable, cushioned chaise longue. The horizontal position was believed to aid digestion — and it was the utmost expression of an elite standing.

“The Romans actually ate lying on their bellies so the body weight was evenly spread out and helped them relax. The left hand held up their head while the right one picked up the morsels placed on the table, bringing them to the mouth. So they ate with their hands and the food had to be already cut by slaves,” Jori said.

Food leftovers and meat and fish bones were thrown on the floor by guests. To get a sense of the scene, consider one mosaic found in a Roman villa in Aquileia, which depicts fish and food leftovers scattered on the floor. The Romans liked to decorate banquet hall floors with such images in order to camouflage real food strewn on the floor. This trompe-l’oeil tactic, or the “unswept floor” effect, was a clever mosaic technique.

Lying down also allowed feast goers to occasionally doze off and enjoy a quick nap between courses, giving their stomach a break.

The act of reclining while dining, however, was a privilege reserved for men only. A woman either ate at another table or knelt or sat down beside her husband while he enjoyed his meal.

An ancient Roman fresco of a banquet scene at Casa dei Casti Amanti in Pompeii, for example, depicts a man reclining while two women kneel on either side of him. One of the women tends to the man by helping him hold a horn-shaped drinking vessel called a rhyton. Another fresco from Herculaneum, displayed at Naples’ National Archaeological Museum, depicts a woman seated close to a man who is lying down while also raising a rhyton.

“Men’s horizontal eating position was a symbol of dominance over women. Roman women established the right to eat with their husbands at a much later stage in the history of ancient Rome; it was their first social conquest and victory against sexual discrimination,” Jori explained.

Superstitions at the table

The Romans were also very superstitious. Anything that fell from the table belonged to the afterworld and was not to be retrieved for fear that the dead would come seek vengeance, while spilling salt was a bad omen, Franchetti said. Bread had to be solely touched with the hands and eggshells and mollusks had to be cracked. Were a rooster to sing at an unusual hour, servants were sent to fetch one, kill it and serve it pronto.

Feasting was a way to keep death at bay, according to Franchetti. Banquets ended with a binge-drinking ritual during which diners discussed death to remind themselves to fully live and enjoy life — in short, carpe diem.

In keeping with this world view, table objects, such as salt and pepper holders, were shaped as skulls. According to Jori, it was customary to invite beloved dead ones to the meal and serve them platefuls of food. Sculptures representing the dead sat at the table with the living.

A mosaic of a skeleton from the House of Vestals in Pompeii holding jugs of wine Credit: Werner Forman Archive/Shutterstock

Wine wasn’t always drunk straight but spiked with other ingredients. Water was used to dilute the alcohol potency and allow revelers to drink more, while seawater was added so that the salt preserved wine barrels coming from faraway corners of the empire.

“Even tar was a common substance mixed with the wine, which over time blended with the alcohol. The Romans could hardly taste the nasty flavour,” Jori said.

Perhaps in the ultimate symbol of excess, the epicure Apicius allegedly committed suicide because he had gone broke after throwing too many lavish banquets. He left behind, however, a gastronomic legacy, including his famous Apicius pie made with a mix of fish and meat such as bird interiors and pig’s breasts. A dish that might struggle to entice at modern feasting tables today.

Flip the gray zone script: How the US can customize its…