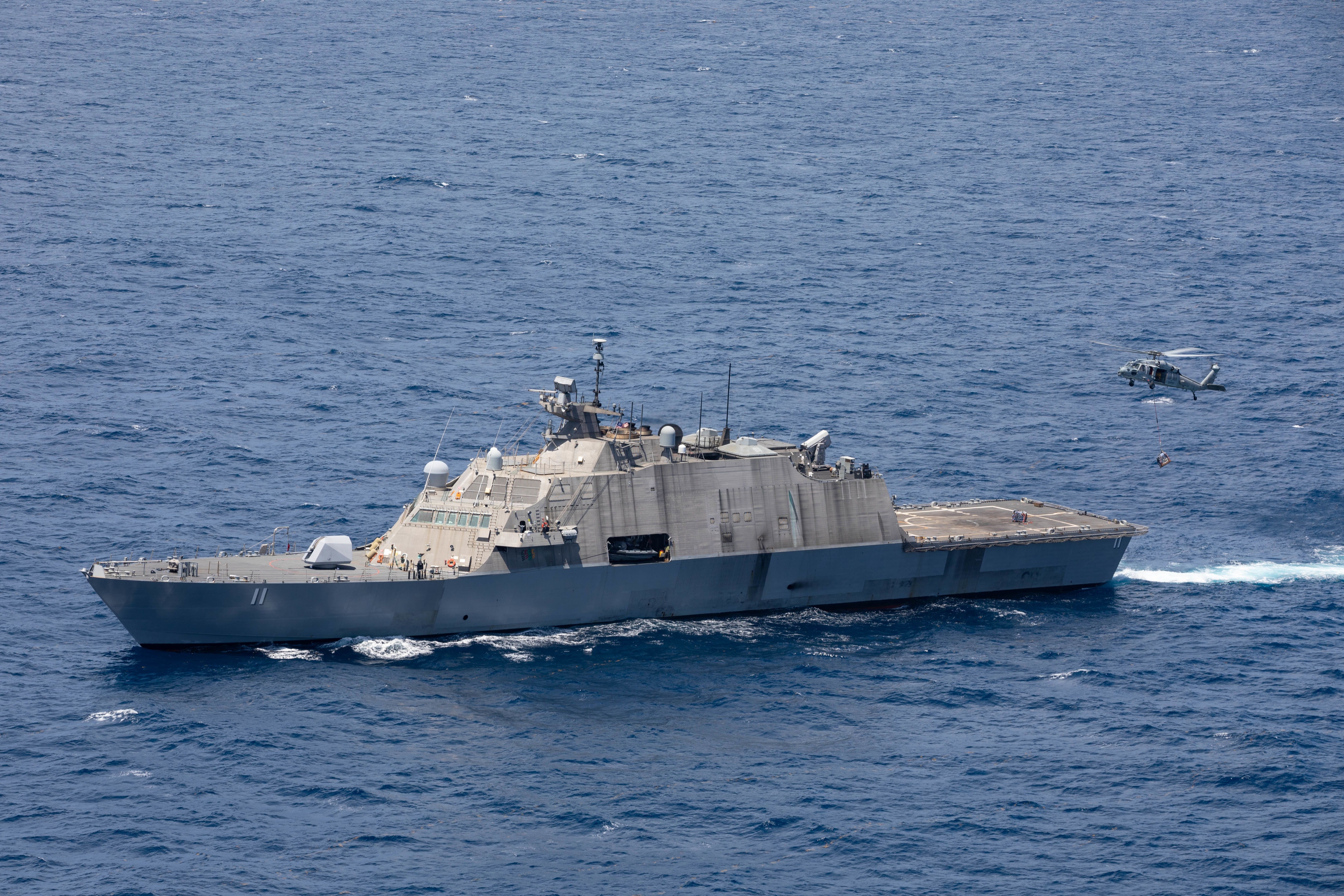 WASHINGTON — American defense company Lockheed Martin is continuing to update its bid to build the Hellenic Navy’s new frigates and modernize its current ones, with Greece set to choose a path forward for its surface fleet by the end of the year.

Greece has asked for a three-part solution to modernize its surface fleet amid increases in Russian submarine presence in the Mediterranean Sea, migration from Africa across the sea and tension with neighboring Turkey. The Hellenic Navy wants to buy four new frigates, modernize the combat capability of its four current Hydra-class MEKO 200 frigates and receive some kind of interim capability to operate while the MEKOs undergo their upgrade process.

Lockheed Martin — alongside the U.S. Navy, with which the firm is paired for the official United States bid in the competition — thinks it has a winning solution due to the way its Aegis Combat System would link these frigates with the rest of the Hellenic fleet across a network, and due to the company’s promise to send the bulk of construction work to Greek companies.

Additionally, “one of the big benefits of the U.S. offer, as compared to all the other offers, is that this is being done through the U.S. government Foreign Military Sales process. Greece has transacted somewhere near 2,000 Foreign Military Sales cases with the U.S. It’s a very well-established process, it’s a very transparent process,” Jon Rambeau, Lockheed’s vice president and general manager for the Integrated Warfare Systems and Sensors business line, told Defense News in a Sept. 10 phone interview.

Five other bids from European shipbuilders appear to be still in contention, but he said Lockheed’s proposal is the only one that is part of an official Foreign Military Sales program, and that therefore comes with all the cost and schedule guarantees the U.S. Navy would expect if it were spending its own money.

Rambeau said those bids were given an initial ranking by Greek officials, but that order was not shared with industry.

Rambeau also said that if the American pitch wins, the U.S. Navy would act as “the custodian of Greece’s money” and “will contract with Lockheed Martin, and they will negotiate with us just as hard as if they were procuring this for the U.S. government. And at the end of the day, if there’s money left over in that case, by law the United States will have to return that money back to Greece.”

He’s hoping Greece’s familiarity with the FMS process and with Lockheed Martin, with which the Greek military has worked for more than 50 years, will give the bid an extra boost this fall. Bids are due in November, with a decision expected by the end of the year.

Joe DePietro, Lockheed Martin’s vice president and general manager for naval combat and missile defense systems, told Defense News in a June interview that Greece’s requirements are based on a need for improved anti-submarine warfare and expanded-area air defense capabilities.

The new construction portion of the U.S. pitch is based on Lockheed’s Freedom-variant littoral combat ship for the U.S. Navy. The LCS was also used as the starting point for the Saudi multimission small combatant currently under construction.

This new frigate, dubbed Hellenic Future Frigate, would be centered around the COMBATSS-21 version of the Aegis Combat System and would be armed with eight Naval Strike Missiles, a 76mm Strales gun, 11 Mk 41 Vertical Launching System tubes and 21 RIM-116 Rolling Airframe Missiles. The ship would include Link 16, Link 22 and Tactical Common Data Link connectivity, enabling it to connect across a network to the rest of the Hellenic military, DePietro told Defense News.

The ship would also come ready to accept the Common Anti-air Modular Missile Extended Range, which features two-way communication between the ship and the missile for better targeting and in-flight updates.

The ship would also be optimized for anti-submarine warfare with many of the systems that are included in the LCS anti-sub warfare mission package, DePietro explained. The SQQ-89 combat suite would help the frigate make sense of the whole operating area by combining information from the frigate’s variable-depth sonar — from dipping sonars employed by MH-60R helicopters and from hull-mounted sonars on other ships in the fleet. That information would inform the firing of anti-submarine rockets either from the frigate or its helicopters.

When it comes to modernizing the MEKO frigates, Lockheed is offering to install an Aegis-based combat system that would integrate these 1990s-era ships with the new frigates, the fleet of MH-60R helicopters, the Hellenic Air Force’s F-16s and more.

DePietro said the MEKO hulls are in decent shape but would need upgrades to their generators and turbines. But the top modernization priorities are to add a common combat system as well as Link 16 and Link 22 compatibility.

Rambeau said the ability to create a link across a network with the rest of Greece’s existing and future aircraft and weapons systems “has been a consistent theme as we think about the upgrades.”

The U.S. Navy would be the one offering the interim solution — likely a few decommissioned ships from the service that could temporarily be given to Greece — until the MEKO upgrades are complete.

A source familiar with the bid but not authorized to talk about the ongoing negotiations between the two countries told Defense News that if the U.S. Navy retires some of its Aegis cruisers or Freedom-class LCSs in fiscal 2022, as it asked Congress to do, then those ships could be the ones sent to Greece for the interim capability.

The Ticonderoga-class cruisers sport the Aegis Combat System that Lockheed is pitching in the new-build and MEKO-upgrade portions of the bid, and the Freedom-variant LCSs would be very similar in design to the new frigates; both are 118 meters in length, with largely the same hull, mechanical and electrical systems and with some of the same combat systems. However, much of the power for anti-submarine warfare capabilities on the LCS comes in an optional mission package, rather than built into the hull.

Lockheed’s Hellenic Future Frigate design is nearly complete, and the company is in varying stages of talks with companies in Greece and throughout Europe to discuss their involvement in construction and in supplying weapons and sensors that Greece requested in its technical specifications.

Lockheed has been talking to the Skaramangas, Greece, shipyard about working together to build some of the four new frigates there; about what investments would be made to facilities there for this frigate program; and more potential work it could take on.

DePietro said Lockheed previously partnered with shipyards in Spain, Canada, Japan and South Korea, as well as in the U.S. when it paired with Fincantieri’s Marinette Marine Shipyard in Wisconsin for the LCS program. Lockheed helped modernize the foreign yards to build ships to American standards, he added.

The ongoing dialogue with the Skaramangas shipyard “very much reminds me of Marinette circa 2006, and a big part of this program is being able to revitalize and recapitalize Greek shipbuilding and its defense industry, which has kind of fallen off from where they were some 20 years ago in capabilities,” he said.

Rambeau said that an analysis of Lockheed’s proposal shows about a third of the money would be spent in the U.S., a third in Greece and a third elsewhere in Europe. About 70 percent of the labor, though, would take place in Greece to “put money back into the local economy.”

According to a Lockheed document, the frigate program would create 7.7 million hours of labor across a five-year construction timeline for the Greek workforce, with 2,500 skilled jobs at the shipyard alone.

DePietro said a range of options are under discussion with the Greek shipyard regarding which ships the yard would participate in building versus fully constructing. For any ships that are not fully built in Greece, he added, the Fincantieri Marinette Marine yard would be able to take on the work without disrupting the tail end of the LCS production there, the beginning of the U.S. Navy’s Constellation-class frigate construction, or the four-ship Saudi multimission combatant program.

He added that the Hellenic frigate project would benefit the supply chain, where many but not all the companies involved will transition to the Constellation class that Fincantieri will build in Marinette. Fairbanks Morse, for example, provides the LCS engines but is not on the Constellation program. Lake Shore Systems also provides several items for the LCS hull that will not be in the Constellation design.

For companies like them, keeping their production lines hot through their work on the Greek frigate program would benefit the U.S. Navy by allowing it a longer period of time to make decisions on how many spares it wants in the inventory.

Between now and the formal bid submission in November, the U.S. government is seeking congressional approval for the FMS case, and Lockheed is shoring up industry agreements.

Office 2021 will ship alongside Windows 11 on October 5