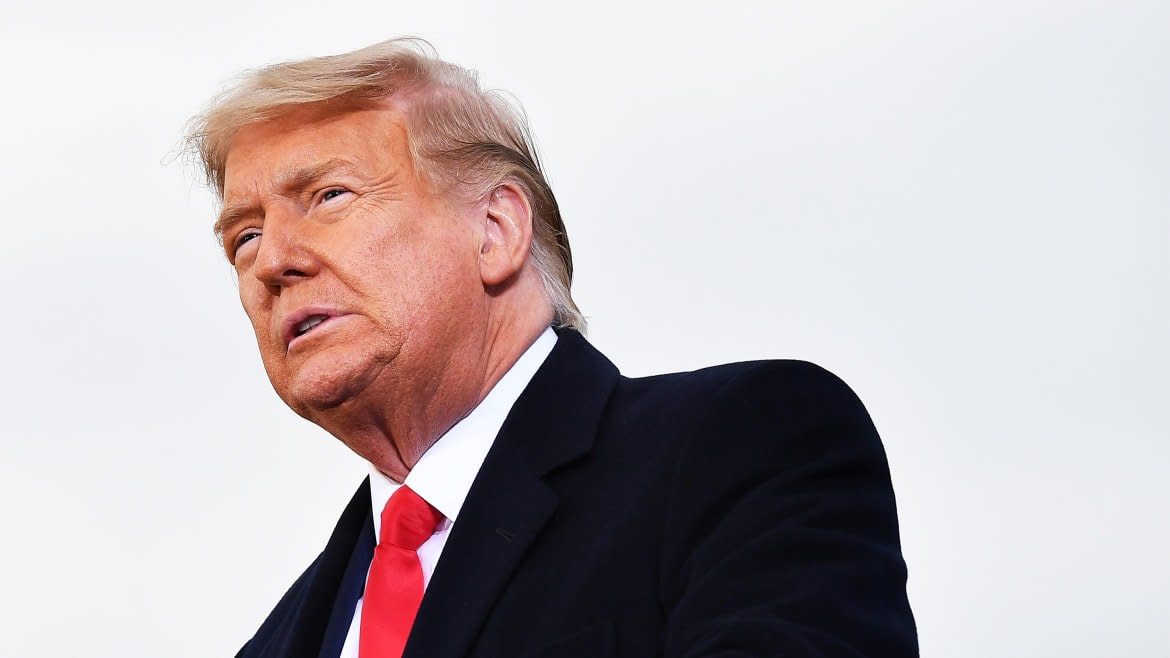 Local Republican officials were recruiting volunteers on Thursday to call Pennsylvania voters and urge them to send in their ballots—two full days after Election Day. This plea was emailed out just hours before President Donald Trump went on national television Thursday to declare the inherent illegitimacy of ballots received after Nov. 3.

The request, election lawyers say, appears to flagrantly run afoul of state law. Under Pennsylvania law and a recent state Supreme Court decision, absentee and mail-in ballots are valid as long as they were postmarked by Election Day and received by Nov. 6. Any Trump supporter who sends in their ballots either Thursday or Friday would not have it postmarked within the acceptable deadline—creating the precise situation that the president himself has deemed fraudulent and corrupt.

The email, which was sent by the group Kenosha For Trump and forwarded to The Daily Beast, said it was marshaling the effort on behalf of Trump Victory, the committee established by the Trump campaign and the Republican National Committee to run the field program for the president’s re-election.

It went out just after 5 p.m. to a group of Trump supporters in Kenosha, Wisconsin. “Trump Victory urgently needs volunteers to make phone calls to Pennsylvania Trump supporters to return their absentee ballots,” the email said. “These phone calls will help President Trump win the election!”

“This seems like encouraging people to improperly submit ballots that should not be counted,” according to Jonathan Diaz, the legal counsel for voting rights at the Campaign Legal Center. “That would be exactly what the president and his campaign are accusing Democrats of doing.”

While legal experts said it was clear that any pool of ballots mailed Thursday or Friday would not meet the legal requirements, they differed in their theories about why the Trump campaign was encouraging it. Some considered it a recognition from the president’s campaign that Pennsylvania’s vote count, which remains too close to call, would tilt in favor of Democratic nominee Joe Biden.

Others speculated that the campaign was encouraging these votes in hopes that one would be accepted, at which point they could petition courts to invalidate the entire pool of absentee ballots—including those properly postmarked by Nov. 3 and received by the Friday deadline—by claiming the whole batch was tainted by fraud. Pennsylvania election law currently holds that ballots received after Election Day without a clear postmark would be presumed valid though subject to rebuttal. Currently, the running tally of votes as reported by the Pennsylvania Secretary of State’s Office on Thursday did not include legitimate absentees arriving after Election Day, which have been segregated in anticipation of future litigation.

“I wonder if they’re doing this in hopes of slipping one through and then waving it around as an example of the flawed process,” said Ben Geffen, an attorney at the Public Interest Law Center in Philadelphia. “The real story is, it sounds like the Trump campaign is promoting cheating.”

The email sent on Thursday included a signature that matched the address of the offices of the Kenosha Victory Center in Kenosha, Wisconsin. A second email issued weeks earlier from the same email address, which was obtained by The Daily Beast, promoted a “Trump campaign volunteer training.”

The email issued on Thursday contained two points of contact with Wisconsin Republican Party email addresses. The phone numbers associated with both those contacts were valid. One led to a voicemail with the same person identifying himself on the voicemail message. Contacted for comment, the other individual referred questions to a state spokesperson for Trump Victory, who did not respond to repeated inquiries.

Just hours after the email went out, Trump held a press conference in the White House briefing room, where he proclaimed that any ballots received by state election officials after Election Day are ipso facto illegitimate.

“We want openness and transparency,” the president declared. “No illegal votes being cast after Election Day.”

The Pennsylvania Supreme Court handed down a decision in September declaring that ballots postmarked by Election Day and received by this Friday would be considered legitimate. The Trump campaign fought that decision tooth and nail, and the president and his allies have railed against that ruling and a subsequent U.S. Supreme Court decision upholding it.

“It will allow rampant and unchecked cheating and will undermine our entire systems of laws. It will also induce violence in the streets,” Trump said of the high court’s ruling.

It’s not clear how the Trump supporters behind the effort hope to deliver ballots by mail by Friday. But Democrats and other attorneys said they were blown away by the clear contradiction between what the president was arguing publicly and what his campaign was doing behind closed doors.

“Not that they care about hypocrisy,” said Lauren Vidas, an election law attorney and Democratic official in Philadelphia, “but they are literally encouraging people to vote after the fact.”

“Good excuse for committing a crime,” joked Cliff Levine, a Democratic election lawyer in Pittsburgh. “‘I wanted to make sure others knew how easy it was to rob the bank.’”

—with additional reporting by Adam Rawnsley