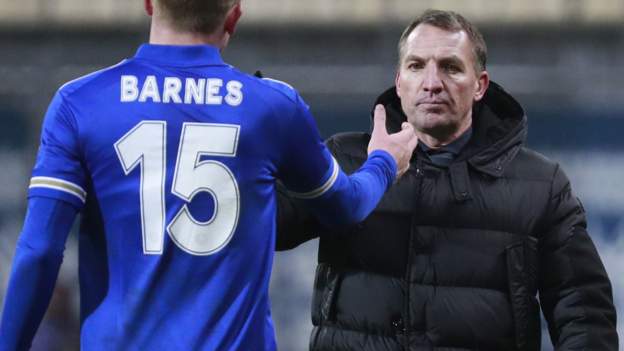 Leicester’s hopes of sealing top spot in Europa League Group G with a game to spare were dashed by Ukrainian side Zorya Luhansk, who grabbed a late winner through substitute Allahyar Sayyadmanesh on a freezing night in Zaporizhzhia.

A win would have been all but enough for the Foxes, but they might now have to defeat AEK Athens in their final match to ensure that top status.

Manager Brendan Rodgers made several changes to the line-up that started in the 2-1 defeat by Fulham, but welcomed back senior players Ricardo Pereira, Caglar Soyuncu and Wilfred Ndidi following their respective spells on the sidelines.

However, Turkish centre-back Soyuncu’s return lasted only 17 minutes when he suffered a recurrence of his groin injury, later confirmed by the Foxes boss.

Leicester twice came close to scoring in one move 10 minutes from time when Zorya goalkeeper Nikola Vasilj extended himself to block shots from Kelechi Iheanacho and then substitute James Maddison. Vasilj then threw himself to his right to keep out Cengiz Under’s 20-yard strike.

Zorya worked their opponents far harder with keeper Danny Ward, making only his second appearance of the season, pulling off two superb saves to deny Vladislav Kochergin and Andrejs Ciganiks, while Vladlen Yurchenko’s header came off the bar.

“It’s frustrating overall,” Rodgers told BT Sport. “I didn’t think the players deserved to lose that at all.

“As the second half went on, we looked like the only team going to win. The players put so much into it. They were difficult conditions.”

Rodgers was delighted in the build-up that three senior players, integral to the team finishing fifth last season, were back in the line-up following injuries.

Pereira was given a 45-minute runout after nine months out with a knee problem. The usually cavalier right-back appeared to play within himself in the first half, venturing near or around the opposition box on only two occasions, unlike James Justin on the opposite flank who appeared in that zone five times. However, the 27-year-old did look assured during the half.

“It’s been a long journey for me,” Pereira said. “I’m very happy to be back playing with the guys and I hope only good things will happen from here.”

As for Soyuncu, his first experience of first-team football in eight weeks was short-lived. He signalled to the bench he needed to come off after suggesting he had suffered a recurrence of his groin injury. Another lengthy period out for the influential defender will be a huge blow to Rodgers with the busy festive period around the corner.

Asked about the severity of the injury Rodgers said: “We have to wait and see on Friday. It’s a recurrence of the groin injury, he overstretched it.”

Of the trio, Nigerian Ndidi had the longest spell in the Zaporizhzhia cold, as he returned from a two-month lay-off with a groin problem. Sitting in midfield alongside the equally industrious Hamza Choudhury, the 23-year-old was exceptional and early in the match helped Pereira on the right by breaking up a possible Zorya attack.

Leicester are at Sheffield United in the Premier League on Sunday (14:15 GMT).