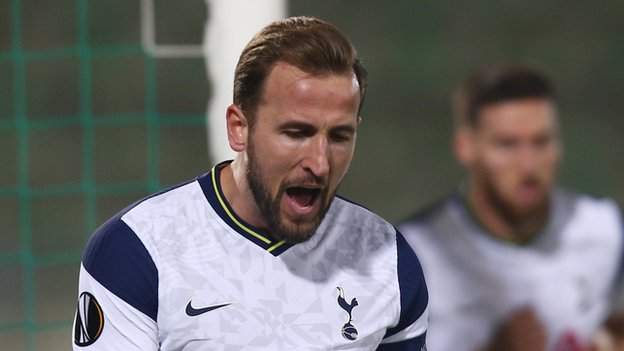 Harry Kane marked his 300th appearance for Tottenham with his 200th goal as Jose Mourinho’s side dominated a Europa League mismatch in Bulgaria.

Kane, 27, long-since cemented his place in the Spurs history books but few could have predicted his prodigious goalscoring rate when he came into the first team seven years ago.

Only 1960s legends Jimmy Greaves and Bobby Smith stand ahead of him in the club’s records and if he stays fit – and at the club – the England captain looks set to break record after record.

He could, and should, have already scored twice when he headed in a Lucas Moura corner to put Mourinho’s side ahead against Ludogorets.

Kane then set up Moura for Spurs’ second before being replaced at the interval as the Premier League side utterly dominated the multiple Bulgarian champions.

Mourinho was furious last week with his side’s insipid display in Antwerp and was rewarded with a controlled, ruthless first-half performance, but the hosts were able to reply early in the second half through Claudiu Keseru.

That was an anomaly though, as Giovani lo Celso’s tap-in secured a routine victory that puts Spurs back in contention in Group J.

Next in his sights at Tottenham is 1961 double-winner Smith, who scored 208 times between 1955 and 1964, with overall record holder Greaves at least another season away on 266.

The Ludogorets defence had no answer to Kane’s ability, but did see an uncharacteristic early miss with the striker blazing over after a fine pass from Harry Winks.

Kane then thumped the post from 25 yards but wiped the frustration from his face when he beat Gareth Bale to a corner to head in goal number 200 – 3,248 days after number one against Shamrock Rovers.

Mourinho is blessed with attacking talent this season, illustrated as Son Heung-min set up the third for Lo Celso just 17 seconds after coming on.

Bale showed promising signs of reaching full sharpness, starting the move for Moura’s goal and going close with a dipping free-kick, while Kane’s replacement Carlos Vinicius was raw but dangerous.

Steven Bergwijn also came on and Dele Alli was left on the sidelines as Spurs cruised to a needed win in the group.

Mourinho won the trophy with Manchester United in his only other Europa League campaign – could Tottenham end their silverware drought in Gdansk next May?

Rate players out of 10 throughout or after the game. The rater will close 30 minutes after the final whistle.

Rating range key1 = Give it up10 = Pure perfection