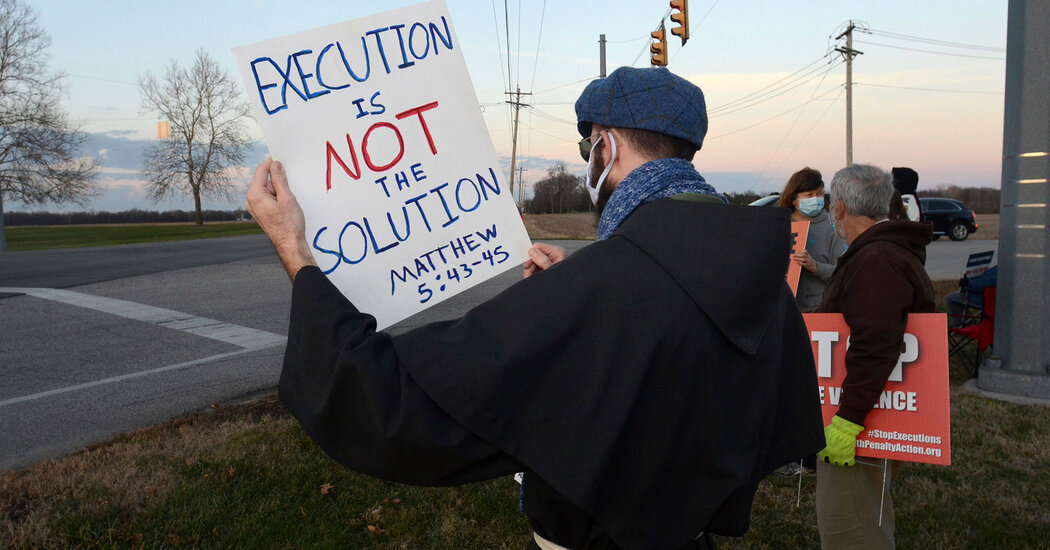 WASHINGTON — The Justice Department executed Orlando Cordia Hall on late Thursday for his role in the 1994 kidnapping and killing of a 16-year-old girl, after the Supreme Court cleared the way earlier in the night.

His execution, by lethal injection at the penitentiary in Terre Haute, Ind., was the eighth by the Trump administration since this summer, when it resumed use of capital punishment by the federal government after a 17-year hiatus.

Mr. Hall, 49, was the first of three federal prisoners scheduled for execution during the presidential transition. President-elect Joseph R. Biden Jr. has said he will work to end the use of capital punishment by the federal government, reversing President Trump’s support for it.

In his last words, Mr. Hall thanked his supporters and assured them that he was all right, according to a report from a journalist in attendance. “Take care of yourselves,” he said. “Tell my kids I love them.”

The Bureau of Prisons confirmed in a statement that Mr. Hall was pronounced dead at 11:47 p.m.

A statement from the family of Mr. Hall’s victim said that it was “the end of a very long and painful chapter” in their lives. The statement also said that “the execution of Orlando Hall will never stop the suffering we continue to endure.”

“Please pray for our family as well as his,” it added.

According to the Justice Department, Mr. Hall was a part of a marijuana trafficking operation out of Pine Bluff, Ark. In 1994, he and others went to the home of a man in Arlington, Texas, who they believed had reneged on a drug transaction, the department said. There, the group kidnapped the man’s 16-year-old sister, and members of the group later raped her, beat her over the head with a shovel, soaked her with gasoline and buried her alive, it said.

Mr. Hall, who is Black, was convicted of, among other offenses, kidnapping resulting in death. The jurors who decided his fate were all white, his lawyers said.

In a filing last week, his lawyers claimed that prosecutors in Mr. Hall’s case struck Black people from the pool of potential jurors out of racist animus to achieve an all-white jury. Lawyers for Mr. Hall also cited other accusations of race-based jury-selection practices that implicated one of those prosecutors, Paul Macaluso.

In an interview, Mr. Macaluso denied the accusations of racism in Mr. Hall’s jury selection and said the result would have been the same with Black jurors.

“They have to find some excuse of why a jury sentenced this man to the death penalty,” he said. “We don’t need to come up with some sort of racial excuse for a jury to find that somebody who has violated the law and has caused someone’s death.”

In the final days of Mr. Hall’s life, courts were largely unreceptive to pleas for a delay to his execution. Both the U.S. District Court for the Southern District of Indiana and the U.S. Court of Appeals for the Seventh Circuit denied Mr. Hall’s applications for a stay.

He found some reprieve on Thursday when Judge Tanya S. Chutkan of the U.S. District Court for the District of Columbia granted a stay. But the Supreme Court vacated the injunction on Thursday night, with the court’s three more liberal justices dissenting.

Lawyers on behalf of Mr. Hall and Brandon Bernard, another inmate scheduled to die, also submitted an emergency application for a stay of execution to the Supreme Court on Wednesday, after the U.S. Court of Appeals for the District of Columbia Circuit declined to issue a stay. The application challenged the federal government’s execution protocol, arguing that the use of the drug pentobarbital without a prescription would violate the Federal Food, Drug and Cosmetic Act and cause irreparable harm.

Mr. Hall’s lawyers also claimed that he was provided the shortest notice period in the history of the modern federal death penalty, just 50 days. The Justice Department announced his scheduled execution on Sept. 30.

With the brief time before his scheduled death and amid the coronavirus pandemic, the government “flouted Mr. Hall’s rights to due process and meaningful access to counsel and the clemency process,” his lawyers claimed in a filing with the Supreme Court.

But the Supreme Court rejected three applications to stay Mr. Hall’s execution, including the one with Mr. Bernard, in a string of unsigned orders on Thursday night.

The Trump administration intends to execute two more inmates in its final weeks.

The government had planned to execute Lisa M. Montgomery, the only woman on federal death row, on Dec. 8. However, a federal judge ordered on Thursday that the government not put her to death before Dec. 31. In a memorandum opinion, Judge Randolph D. Moss of the U.S. District Court for the District of Columbia cited the recent coronavirus diagnoses of her two longtime lawyers.

A spokesperson for Ms. Montgomery’s legal team said in a statement that one of the lawyers spent six hours in the emergency room on Wednesday night with an elevated heart rate and elevated blood pressure. Ms. Montgomery’s lawyers had argued that her rights would be violated without sufficient access to her experienced counsel and mental health experts during her clemency process.

Health experts clash over use of certain drugs for COVID-19