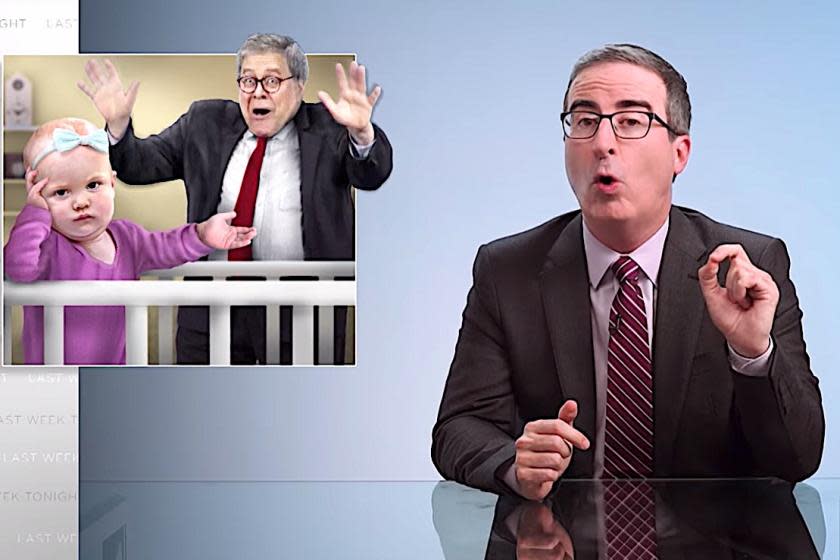 Since becoming U.S. attorney general, William Barr “has been in the news constantly, and almost never for good reasons,” John Oliver said on Sunday’s Last Week Tonight. “In just the past few months, he has, among other things, sown distrust in mail-in voting and also dismissed public health measures in the middle of a pandemic, in the grossest possible way.”

Strikingly, when President Trump nominated Barr 18 months ago, “the news was basically greeted with relief” there would finally be an “adult in the room,” Oliver said. “Look, not only is being an adult an absurdly low bar to set for the highest levels of government, but it also implies that the main problem with Trump is that he is childish. And I know that it makes for a fun balloon now and again, but at its core, ‘I wish that white nationalist with an authoritarian streak would act his age’ is sort of missing the point here.”

It’s also “worth remembering, some adults are a–holes, and Barr is very much one of them,” Oliver said. “But he is also very much more: He is a driven, deeply moralistic man with extreme views on executive power, actually making him one of the more dangerous figures in the Trump administration — which I know is saying something. But if Trump gets a second term, Barr is only going to be more dangerous going forward.” He ran through Barr’s lifelong “veneration of authority,” fervent belief “in something known as the unitary executive theory,” and why he could only “fully test his belief that the president answers to absolutely nobody” when Trump was elected.

“And while Trump has been grumbling lately that Barr should have done more to punish his political enemies, when it comes to playing defense for Trump, Barr has been relentless,” Oliver said. Trump may be “Barr’s dream president, someone who is the ideal vessel for Barr’s decades-long pursuit of a unitary executive,” and if they get a second term to pursue their “case that a moral order must be imposed, and by force,” it will be “very, very dangerous” for America. Because “Barr isn’t just fighting to give the president power on principle, he wants to give this president power so he will use it against the people that Barr thinks are ruining society,” he said. There’s a bit of NSFW language. Watch below.

More stories from theweek.com
How to make an election crisis
64 things President Trump has said about women
Republicans are on the verge of a spectacular upside-down achievement

In Egypt the mummies return. But will tourists in a pandemic?