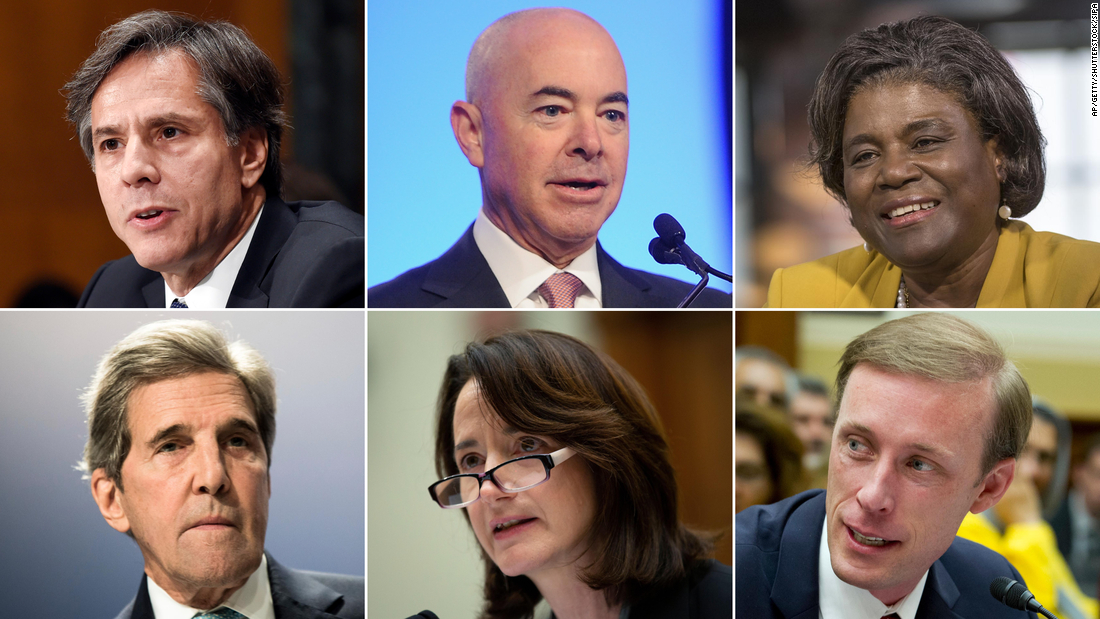 Cuban-born Alejandro Mayorkas, a former deputy secretary of DHS who Biden has nominated to lead the department, will be tasked with rebuilding an agency that carried out some of the most draconian measures associated with President Donald Trump’s hardline immigration policy, including family separations at the US-Mexico border. Biden’s pick for director of national intelligence, Avril Haines, a former top CIA official and deputy national security adviser, will also make history if confirmed by the Senate.

Biden is moving swiftly to craft his incoming administration despite Trump’s ongoing efforts to reverse the election results and gum up the transition. The slate of nominations announced on Thursday included confirmation of the selection of Antony Blinken, Biden’s top foreign policy aide, as the next secretary of state, Linda Thomas-Greenfield to be the US ambassador to the United Nations. Jake Sullivan will join the White House team as Biden’s national security adviser.

The choices reflect Biden’s desire to construct a diverse Cabinet with experts versed in public policy and deep experience in government. Former Secretary of State John Kerry has been tapped to serve as Biden’s climate czar. Kerry is a champion of the Paris climate agreement, the landmark deal from which Trump withdrew the US. Kerry was also Biden’s pick to co-chair a “unity task force” on climate change with allies of Sen. Bernie Sanders after the Democratic presidential primary.

Biden in a statement described Monday’s selections as “the crux” of a team charged with reasserting American leadership on the global stage in the aftermath of Trump’s efforts to cut off multilateral diplomacy and wreck fragile pacts like the Iran nuclear deal.

“These individuals are equally as experienced and crisis-tested as they are innovative and imaginative,” Biden said. “Their accomplishments in diplomacy are unmatched, but they also reflect the idea that we cannot meet the profound challenges of this new moment with old thinking and unchanged habits — or without diversity of background and perspective. It’s why I’ve selected them.”

The top Democrat on the Senate Intelligence Committee immediately leaned on his Republican colleagues to confirm Haines to lead the intelligence community.

“Avril is smart and capable, with a background that will serve her well as Director of National Intelligence,” Virginia Sen. Mark Warner said. “While I expect that she will face rigorous questioning from Senators on both sides of the aisle, the sooner we can get a confirmed DNI in place to start fixing the damage the last four years have done to our intelligence agencies, the better.”

Thomas-Greenfield is a career foreign service official who was among the first casualties of Trump’s initial purge of professional diplomats in 2017. She served as the assistant secretary for the Bureau of African Affairs during the Obama administration and is held in high esteem among fellow foreign policy professionals.

“My mother taught me to lead with the power of kindness and compassion to make the world a better place,” Thomas-Greenfield tweeted after her nomination was announced. “I’ve carried that lesson with me throughout my career in Foreign Service — and, if confirmed, will do the same as Ambassador to the United Nations,” the former career diplomat said.

Biden also announced that position will be elevated to a Cabinet-level role, reversing Trump’s decision to demote the role.

Climate activists will also take note of the decision to install Kerry, as the special presidential envoy for climate, on the National Security Council.

“This marks the first time that the NSC will include an official dedicated to climate change, reflecting the president-elect’s commitment to addressing climate change as an urgent national security issue,” the Biden transition team said in a release announcing the picks.

In taking over the DHS, Mayorkas faces the greatest domestic challenge.

The department became the enforcement arm of some of Trump’s most controversial programs. His selection received an early endorsement from former Housing and Urban Development Secretary Julián Castro, who ran in the Democratic presidential primary and has emerged as a leading immigrants’ rights advocate.

“Alejandro Mayorkas is a historic and experienced choice to lead an agency in desperate need of reform,” Castro tweeted. “As an immigrant and a creator of the DACA program, he’s well suited to undo Trump’s damage and build a more compassionate and common sense immigration agenda.”

In a pair of statements, the progressive group Justice Democrats and the Sunrise Movement, a youth-led climate activist organization praised the selection of Kerry, but continued to push for a new White House climate office dealing with domestic policy.

“We are encouraged by Joe Biden making one of his first major appointments John Kerry as Climate Czar as it demonstrates the urgency of taking bold, global action on the climate crisis,” Justice Democrats executive director Alexandra Rojas, a CNN contributor, said. “But America also needs a domestically-focused Climate Czar who directly reports to the President and will oversee an Office of Climate Mobilization agreed to in the Biden-Sanders task forces.”

This story has been updated.

Biden Reportedly to Choose Janet Yellen as US Treasury Secretary

Amazon says it is rolling out fitness-tracking features to its Echo Buds, letting users track the duration of a workout, estimated calories burned, and more (Todd Haselton/CNBC)