Japan built monster plane-carrying subs to attack US cities during World War II, but they never fired a shot 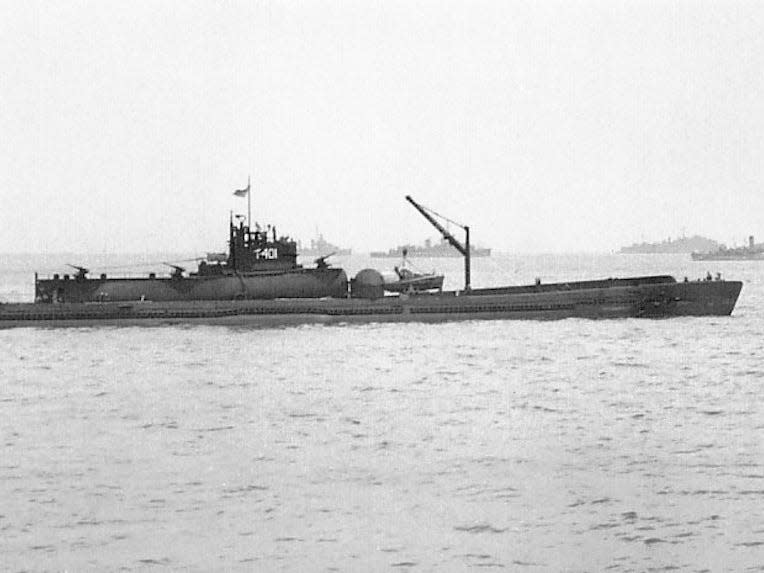 On August 28, 1945, two US destroyers intercepted a massive Japanese submarine several miles off the coast of Honshu, Japan’s biggest island. The submarine, which was larger than either US ship and nearly as wide, surrendered without incident.

A day later, the US submarine USS Segundo found a similar Japanese submarine nearby. After a brief escape attempt, the Japanese crew, knowing the war was over and they were out of options, surrendered.

The captured submarines were enormous — 400 feet long and 39 feet wide, easily making them the largest submarines in the world at the time. They also had a massive empty chamber in their center, leading the first Americans who boarded them to believe they were for cargo.

Later the Americans learned the truth: The chamber was actually a hanger, and the two vessels were I-400-class submarine aircraft carriers — one of the Japanese Empire’s greatest secret weapons.

The I-400-class, known to the Japanese as the Sen Toku type, was the brainchild of Adm. Isoroku Yamamoto, commander of the Combined Fleet and mastermind of the Pearl Harbor attack.

Yamamoto, knowing Japan could not withstand the US’s full might once it recovered from Pearl Harbor, was convinced that attacks on mainland American cities would dissuade the US from striking back in the Pacific.

But Japan could not spare the carriers or battleships needed for such attacks. Inspired by the success of Germany’s U-boats, Yamamoto decided on a new weapon: submarine aircraft carriers.

The concept was not new. Submarines had experimented with carrying aircraft as early as World War I, and Japan’s new Type B-1 submarine was equipped with a hangar for a Yokosuka E14Y1 floatplane.

But those subs could only carry one aircraft used only for reconnaissance. Yamamoto wanted subs capable of holding multiple aircraft that could carry the largest bomb or torpedo in the Japanese arsenal.

The only purpose-built submarine aircraft carriers in history

Yamamoto submitted a proposal for such submarines on January 13, 1942. A little over a year later, Japan began building the first purpose-built submarine aircraft carriers in history.

The subs were truly a marvel of engineering. Double-cylinder hulls supported the sub’s massive weight and provided stability on the surface. The hulls were also covered in an anechoic coating, based on a German design, to absorb sonar

They had a heating system to warm aviation fuel before takeoff, a compressed air catapult to launch the planes, and a hydraulic crane to lift the planes from the water after they landed.

For takeoff, the Seirans would be loaded on the catapult, fitted with floats, armed, and then launched. All three could be launched in 30 to 45 minutes.

The subs were also heavily armed, with one 14 cm

deck gun aft of the hangar, three triple-mounted and one single-mounted 25 mm AA guns on the deck, and eight torpedo tubes. They were designed to travel thousands of miles without refueling.

Too late to make a difference

The original plan called for 18 I-400s to be built to bomb cities on US coasts. But by the time the first I-400 was completed, Japan had suffered major setbacks that hampered the project.

Yamamoto, the subs’ chief advocate, was killed in an air battle in April 1943. Without his backing, the program was no longer given top priority and the order was cut from 18 to 5.

By the time the first two subs were completed, the war had turned decisively against the Japanese. Conventional bombing of US cities with so few aircraft was pointless, and plans to drop plague-infested flea bombs to start a pandemic were called off because they were too extreme

A plan was made to use the subs to launch a kamikaze attack on the Panama Canal to slow down American ships, but by July 1945, most of the US Navy was already in the Pacific.

A final plan was made to attack the major US Navy base at Ulithi Atoll. I-400 and I-401, each with an accompanying sub, would rendezvous off Ulithi and launch six Seirans in a kamikaze attack.

The Seirans were even painted in US markings in an attempt to deceive the Americans, a violation of the rules of war.

But the attack never happened. The atomic bombings of Hiroshima and Nagasaki, along with the Soviet invasion of Manchuria, forced the Japanese to surrender on August 15. A day later, the subs were ordered to cancel their attack.

As they returned to Japan, they launched their Seirans into the sea, fired all torpedoes, and destroyed all documents. Shortly after the subs surrendered, the commander of the Ulithi attack, Cmdr. Tatsunosuke Ariizumi, shot himself.

After the war, the Soviets made it known they

wanted to inspect the I-400s. Unwilling to let the new weapon fall into the wrong hands, the US scuttled them.