Ivanka Trump Was Floating Above This Week’s Mess. No Longer. 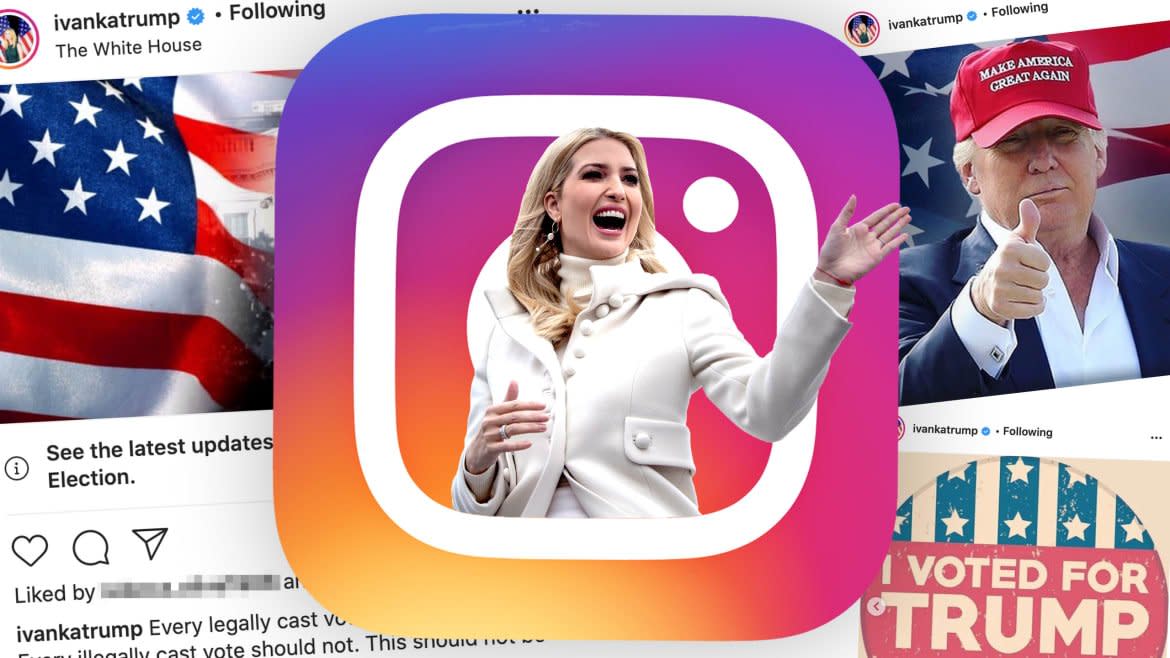 Ivanka Trump lives her life on Instagram; this year, her 7.2 million followers were privy to photos of her campaigning for her father. . .and also, for attention. In the lead-up to November 3, Ivanka(’s assistants) breathlessly posted pictures from barns in North Carolina, fields in Pennsylvania, and packed stages in Wisconsin. In her overcoats and pantsuits, she fashioned herself an avatar of inoffensive feminism, a “woman who works” doing. . .something. (Just trust her!)

But after ballot counting began and the shine of Ivanka’s Election Day began to wear off like gilded flakes on the elevator in her father’s tacky New York tower, something happened. The 39-year-old first daughter and presidential adviser went silent on Instagram. Her brothers desperately raged on Twitter, threatening legal action. But not unlike Ivanka herself, her social media did nothing.

In 72 hours filled with people screaming at each other (some knowing more than others), Ivanka’s quietness was a welcome respite. Maybe she was snuggling at home in DC, teaching herself Greek or reading The Odyssey or whatever privileged past-time she has picked up in a quarantine her father says shouldn’t exist. Then, just as Trump began his press conference/liefest, Ivanka apparently woke up.

She began by posting a photo of her father superimposed over an American flag, giving a thumbs up. “The Election 2020 Employer donor data proves that President Trump leads the party of the American people!” Ivanka wrote in the caption, adding, “@realdonaldtrump’s largest donors are construction workers, farmers, truckers, members of the military & everyday citizens. Biden’s support comes from Big Business, Big Banks, and Big Pharma. My father built the most diverse and inclusive coalition of support in Republican history—with historic levels of Latino, Black, and Native American voters. He will always go to the mat fighting for you, your families and the future of this great Country! 🇺🇸”

Later, she posted a graphic that read “I Voted for Trump,” over a stars-and-stripe printed background. She continued her propaganda-lite with a snapshot of the White House fading into a flag waving in the wind.

As just about everyone except the Trump family acknowledges that Joe Biden inches closer to presidency, Ivanka’s feed has undergone a staunch rebrand.

Like her father, brothers, and their cronies, Ivanka is in full gaslight mode, ready to brandish a flag while lying through her teeth. She wants to come off as exceptionally “American” in her posturing, though this election showed that the (slim) majority in this country does not want her father in office.

The grace period for saving Ivanka’s reputation seems long gone, though she might be trying to do so anyway. As Nate Freeman from Artnet reported on Friday, against all odds, Ivanka and Jared anticipate a return to the New York society they used to consider a playground.

“Sources said that many of the more prominent dealers would not think twice about selling Jared and Ivanka works, even if they wouldn’t want to be buddy-buddy with the couple in public,” Freeman wrote.

Others interviewed by Freeman said the couple is “universally reviled by the art-world level-pullers they once considered cheek-kiss acquaintances,” and one “vowed to never sell to her again.” There is also the potential for protests to break out at any opening they attend “at least for the first year or two of the post-Trump reality.”

Though New York is a liberal city particularly ravaged by the coronavirus, its high society has famously forgiven certain sinners and let them back into their rarified social circles. (Case in point: Jeffrey Epstein.) The question remains if Ivanka and Jared can cross that threshold upon their all-but-inevitable return. Until then, it seems like she will be posting her way through the madness—propaganda that’s oh-so-pretty.

Cuba and Iran FMs to mark alliance against US sanctions