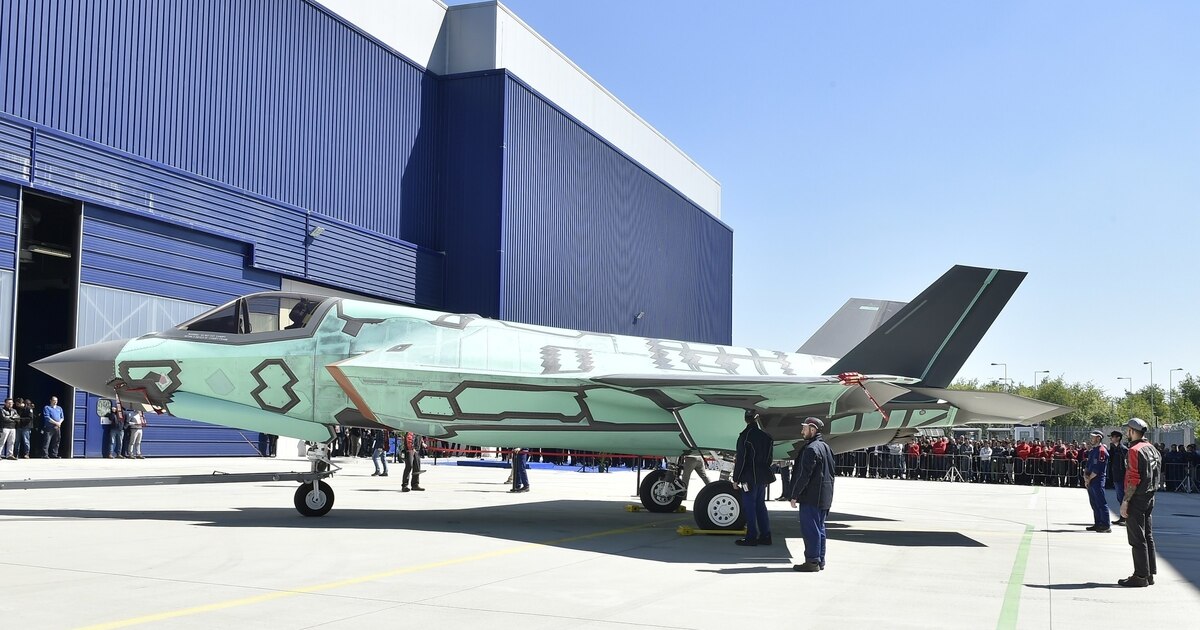 Correction: A previous version of this story misidentified which Italian service’s F-35Bs are participating in training at Beaufort Air Base in South Carolina. The Navy’s jets are attending the training.

ROME — A long-running tussle between Italy’s Air Force and Navy over the F35-B jet is coming to a head as deadlines approach for deciding who gets the next aircraft to roll off the production line and where it will be based.

Italy’s planned order for 30 of the short-takeoff-and-vertical-landing aircraft is to be split by the services, with each receiving 15, in addition to the 60 F35-As ordered for the Air Force.

After the first two of Italy’s F35-Bs went to the Navy and the third to the Air Force, a decision is due, possibly within weeks, on who gets the fourth one next year as the two military branches jostle for primacy on the program.

The Navy sees the “B” version as essential for replacing its aging AV-8 jets on its Cavour carrier, while the Air Force wants the jet for expeditionary missions overseas where it can be flown off short runways.

“There has been a tug of war between the Navy and the Air Force over who gets the jets first, but from a practical point of view the navy may have a right to the next one,” said Alessandro Marrone, senior fellow at the IAI think tank in Rome.

“Once the Navy gets it, it will have three F35-Bs and can start operations from the Cavour, which will immediately boost its capabilities and make a difference to Italy’s military capabilities,” he added.

A senior defense source who backed the Navy to get the next jet said: “The Cavour already faces challenges deploying with the AV-8s, which do not have Link 11 and are due to end their operational life in 2025.”

He added: “Carriers are often brought in at the very start of military operations and have to have maximum efficiency, and with Brexit approaching, Europe will lose U.K. carriers and can only rely on France’s Charles de Gaulle and Italy’s Cavour, which hosts obsolete aircraft.”

Italy’s F35s are currently rolling off the country’s assembly line at Cameri in northern Italy, which is now assembling jets for the Netherlands as well as Italy.

The two Navy F35-Bs were sent after delivery to the United States to participate in training at Beaufort Air Base in South Carolina and are due back in Italy at the end of 2021, the defense source said.

In the meantime, the Cavour was due at Naval Air Station Patuxent River, Maryland, in the United States in November to attain certification for hosting the F35-B with the help of U.S. test aircraft.

The onset of the coronavirus pandemic has pushed the visit back to the spring of next year, the source said.

Back in Italy, apart from deciding on who gets the fourth aircraft, officials are also continuing to discuss whether all of Italy’s F-35Bs, including the Air Force and Navy jets, should be grouped at one base to save on logistics, and if so, who should run it.

The choice is between the Navy’s base at Grottaglie in Puglia in the southern heel of Italy where it bases its AV-8s, or the Air Force’s Amendola base, also in Puglia, to which F-35As are already assigned.

Analyst Marrone said that if the Navy gets the next F-35B, it would have a better argument for bringing all its jets to Grottaglie. “If you prioritize the delivery of aircraft to go on board the Cavour, you automatically prioritize Grottaglie,” he said.

“The Navy has limited personnel, which will continue to be needed to maintain the AV-8s at Grottaglie for a while. It cannot send other personnel to the air force base at Amendola to look after F35-Bs,” said the defense source.

Arguments for basing all Italy’s F-35Bs at Amendola to take advantage of the Air Force’s F-35 infrastructure are also convincing.

“Amendola is the logical choice since the base boasts a high degree of professional capability on the F35,” said retired Gen. Leonardo Tricarico, a former head of the Italian air force and now chairman of the ICSA think tank in Rome.

An added selling point for Amendola is that the air force’s first F35-B did not fly to the United States for pilot training as it was meant to, but has spent months at Amendola allowing Air Force personnel to get used to it.

The reason? Coronavirus. “The F35-B was due to fly to the U.S. in February, but we were asked to delay sending it due to the virus so it went to Amendola,” said an Air Force source.

“We have since shown we are able to host and operate the ‘B’ there. Having the ‘A’ allowed us not only to test the ‘B’ but also test having a mixed fleet. It has vindicated our decision to have both aircraft,” the source added.

In July, the Air Force flew the jet to the Italian island of Pantelleria in the Mediterranean as part of an exercise to test its ability to mount an expeditionary mission.

“Having operated the ‘A,’ we can now move faster on the ‘B,’ ” the Air Force source said.