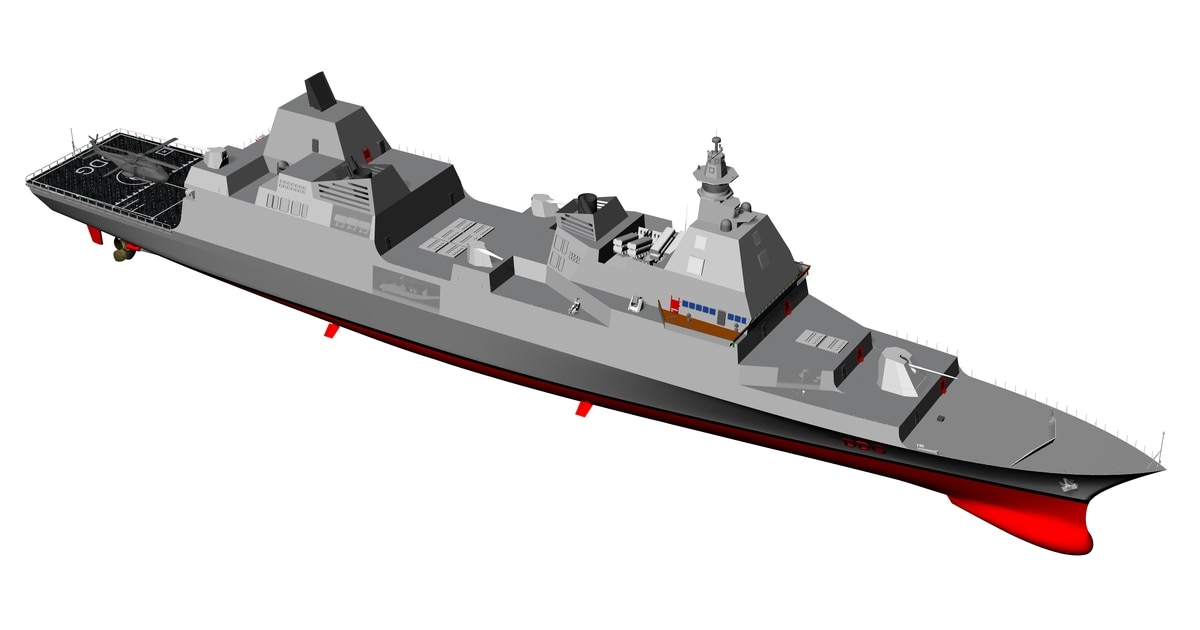 ROME — Fresh from a burst of shipbuilding spurred by the retirement of old vessels, the Italian Navy is now back at the drawing board to design what it considers the cornerstone of its fleet — new destroyers.

After building 10 FREMM-class frigates — the same type acquired by the United States — as well as designing new 4,500-ton multimission ships, a 33,000-ton landing helicopter dock and new logistics vessels, a risk-reduction study is due to start on two 10,000-ton destroyers dubbed DDX.

“Destroyers are fundamental for a blue water fleet like Italy’s, which must be capable of projecting capability at sea and from the sea while operating across the whole spectrum of maritime and joint operations,” Vice Adm. Aurelio De Carolis, deputy chief of staff of the Italian Navy, told Defense News.

“Apart from carriers, amphibious vessels and submarines, you need destroyers with land strike and task group-protection capabilities,” he added.

The Navy wants the 175-meter-long vessels to replace two aging destroyers, the ITS Durand de la Penne and ITS Mimbelli. Those two vessels entered service in the early 1990s and were joined in service by Italy’s two more recent Horizon-class ships, which the Navy classifies as destroyers.

“We have always had two pairs of destroyers in service, dating back to the 1960s,” De Carolis said.

With €4.5 million (U.S. $5.3 million) budgeted so far for two-year feasibility and risk-reduction studies starting early next year, the Navy aims to have a final operational requirement by 2022, sign a construction contract in 2023 — funding permitting — complete the design in 2025, and receive the first ship by 2028.

Current plans envisage vessels that are 24 meters wide with a 9-meter draft and more than 300 crew, while offering a top speed of over 30 knots using the CODOGAL (COmbined Diesel Or Gas And eLectric) propulsion system, De Carolis said. The system allows the use of either gas or diesel turbines, plus electric propulsion for lower speeds.

Italy is renewing its Navy amid the Mediterranean Sea’s shift from a backwater to a tinderbox as Turkey throws its weight around, Libya remains tense after years of conflict and Russia tries to increase its regional influence.

When fully budgeted, the ships likely will be built by Italian state firm Fincantieri, keeping the yard busy after a run of recent naval construction thanks to Italy’s $6.3 billion so-called Naval Law in 2014 that led to the landing helicopter dock (LHD), multimission vessels (PPA) and logistic ship programs.

Long-range firepower for the destroyers will be guaranteed by six eight-cell missile launchers for a total of 48 cells, with two launchers toward the bow (ahead of the bridge) and the remainder amidships.

Aster anti-air missiles, already in use on other Italian vessels, will be adopted, as well as a land-strike missile. “The Navy needs a credible land-strike capability and we are considering options now,” De Carolis said.

That could lead the Navy to consider MBDA’s naval variant of the Scalp missile. What is confirmed is the acquisition of the European consortium’s Teseo Mk2 Evolved anti-ship missile, which the admiral said offers “land-strike capability in the littoral.” The weapon will be fired from launchers located immediately behind the bridge, he confirmed.

A rear helicopter deck and hangar will be able to host two Navy EH101 or two SH90 helicopters.

A third 76mm gun sits astride the helicopter hangar at the rear of the ship. Dubbed “Sovraponte” and built to be positioned on top of ship structures, the cannon was first developed for the PPA vessels. “We are satisfied with Sovraponte,” the admiral said.

The cannon is one example of how the destroyer will leverage new technologies funded by the Naval Law, with radar another example. The destroyers will mount Leonardo’s Kronos, an active electronically scanned array radar with a fixed face as well as C- and X-band antennas, which are mounted behind panels above the bridge. This technology was used in the two “Full” versions of the seven PPA vessels.

Leonardo will also supply the same rotating L-band long-range radar, to be positioned at the rear of the vessel, which has also been adopted for the LHD Trieste.

The combat management system as well as the communications and electronic warfare suites will be derived from those developed for the newest ships of the fleet, while anti-submarine capabilities will include sonars (both hull-mounted and towed array), torpedo launchers, and decoys.

“We will need at least two destroyers ready at all times, which means four destroyers in total,” he explained. “The procurement is also part of our commitment to NATO since we are part of a project to stand up new amphibious task forces, each containing three battalion-level landing elements with related combat and combat-service support, which means four amphibious ships and destroyers for protection.

“These destroyers will defend — together with [anti-submarine warfare] frigates, submarines and embarked naval aviation — amphibious naval task groups during their movement towards assault areas, and then provide effective naval fire support for the sustainment of projection and ashore operations carried out by elements of the landing force. All this is required, including the capability to play the crucial role of coordination and control of the airspace over the amphibious objective area.

“The U.S. and Russia still operate cruisers, but most other navies today rely on destroyers for fighting power. They must cover anti-air, anti-ship and anti-submarine operations with a focus on integrated air and missile defense, including ballistic missile defense.”

The most “critical task” for destroyers, he added, is protecting carrier battle groups and playing the typical “shotgun role” for carriers. Examples he gave included the 1990-1991 Persian Gulf War when the Italian vessel ITS Audace was part of the escort to the U.S. Navy aircraft carrier Theodore Roosevelt, and during Operation Enduring Freedom in 2002, when the ITS Durand de la Penne escorted the U.S. Navy carriers John C. Stennis and John F. Kennedy.

“Italy cannot do without a balanced Navy covering all operations from blue to green to brown waters and well into the littorals, from minesweeping to submarines and fixed-wing carriers, with overall air protection provided by destroyers and anti-submarine warfare mostly played by frigates,” he added.