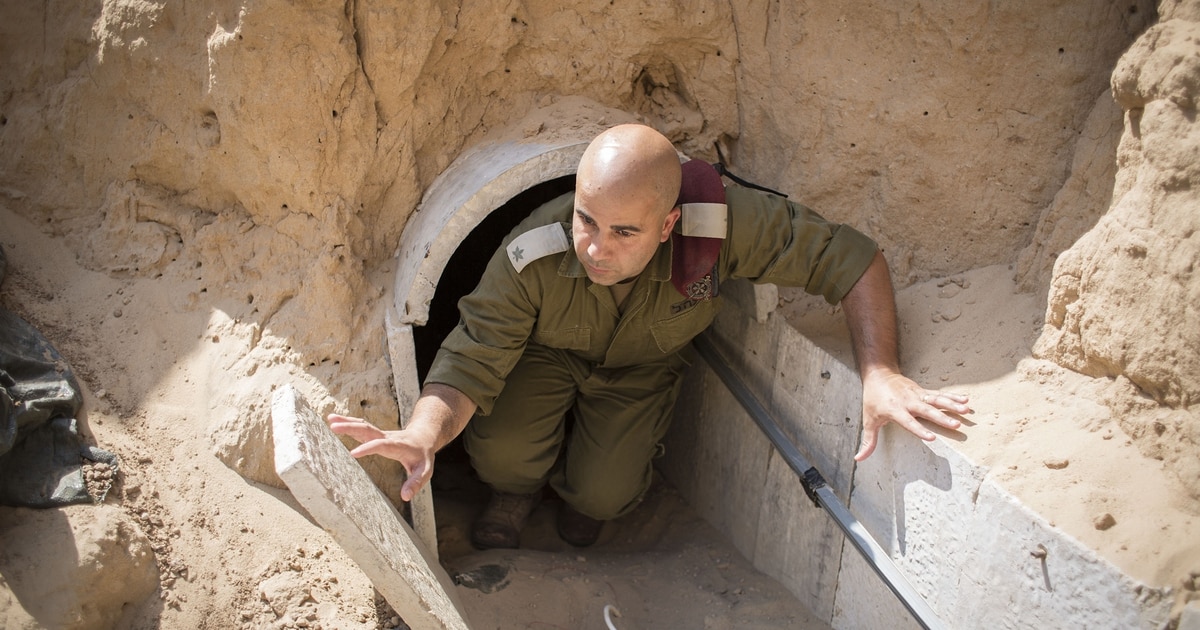 JERUSALEM — Israel located and exposed a tunnel being built from the Gaza Strip into Israeli territory on Oct. 20 in the first detection by the Israel Defense Forces’ Sensory Concrete Barrier that is based along the border.

“The discovery of the tunnel last week is a huge achievement for the state of Israel and the Army,” said Maj. Amir, whose last name was withheld for security reasons. “It was very impressive and professional, and we managed to stop the enemy from advancing.”

The tunnel was located in Israel, across from the Palestinian city of Khan Yunis. While the tunnel did penetrate Israel’s border, it did not cross the Sensory Concrete Barrier and there was no threat to nearby Israeli communities, the IDF said.

“The Sensory Concrete Barrier, which was built over the last years and will be completed soon, provided the necessary indication for IDF engineering forces to locate the offensive terror tunnel,” according to the IDF.

The Israeli government reported that it will gather information about the tunnel through a technical evaluation, but it has not released many details about how the tunnel was constructed. Decisions about how to neutralize or destroy it have not been released.

This infographic shows the path of a recently discovered tunnel in relation to Israel’s underground Sensory Concrete Barrier, which detected the tunnel. (Courtesy of the Israel Defense Forces)

Gaza has been festooned with tunnels for years, some of which were used for smuggling from Egypt and others to carry out attacks inside Israel. The Israeli government holds the militant group Hamas responsible for activity in Gaza.

The tunnel threat peaked during the 2014 Israel-Hamas war when 32 tunnels, of which 14 penetrated Israeli territory, were discovered. Israel began work on an anti-tunnel barrier in the wake of the conflict, and the U.S. has supported Israel’s efforts with up to $120 million since 2016.

Israel has used a combination of new technologies as well as intelligence and surveillance methods to identify and destroy up to 20 tunnels since 2014. Israel also constructed a multilayer barrier around its territory, with its third section launched in February 2019. The underground portion, estimated at $833 million in 2018, was reported to reach “dozens of meters” into the ground, although today Israel does not release specifics about the final version of the underground barrier. The underground barrier, estimated to be fully complete in March 2021, will stretch about 40 miles around the strip.

Inspired by the Israeli Iron Dome, the so-called steel dome is a multilayered system of new technologies, tactics and procedures aimed at denying militants from Hamas and Gaza-based terror organizations the ability to attack Israel from underground.

Amir, who commands an engineering unit in Israel’s southern region where the Gaza Strip is located, compared the struggle against the tunnel threat to a chess game. His unit is responsible for the developing solutions to the threat and “locating and adapting technological means” to manage operations in the field. He told Defense News that the protective barrier worked quickly and accurately. In this chess game comparison, Hamas is always trying to find ways around Israel’s multiple layers of security, which include electro-optical sensors, UAVs and a maritime barrier.

Amir has experience against the tunnel threat going back to the 2014 war and said he has witnessed Israeli’s technological advances. However, most of the specifics of these advances, such as which sensors are on the barrier or how they operate, are a closely guarded secret.

The IDF officer said his team is pleased about its achievement. “Our forces and engineering forces are very confident in their capabilities, and any operational success entails great excitement that we were able to thwart something very big and keep the residents safe,” he said.

However, he added, Hamas will likely adapt and try other methods. “History speaks for itself. The enemy will always try to change himself and invest greater efforts and think of other ways. Of course the technology and the obstacle [of the barrier] are a very big challenge, and of course the barrier lowers the risk considerably.”

Israel’s experience with the barrier can help address other threats and potentially on other frontiers, the officer said. Each area near Israel’s border is unique, and the country has put in place sensors and technology combined with intelligence-gathering methods to provide a complete picture around the Gaza Strip. Amir said after the barrier is completed in March, the IDF will concentrate on the next step: preparing for new threats yet to come.

Already Israel has faced a threat of incendiary balloons following the country’s success over the last decade in using the Iron Dome air defense system to shoot down thousands of Hamas-launched rockets. Israel has used lasers against the balloons in some instances.

US cites ‘credible allegations’ of fraud in Tanzania election