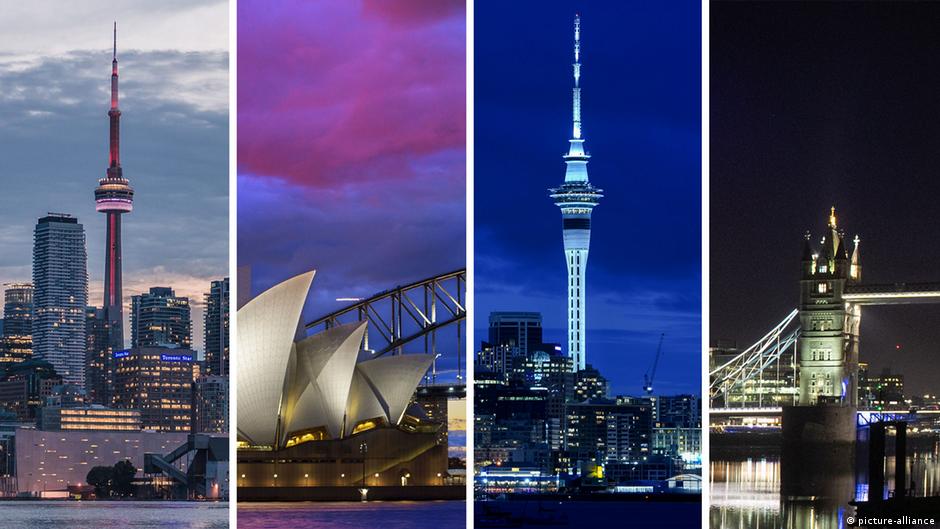 CANZUK — a theoretical new trade alliance between the United Kingdom, Canada, Australia and New Zealand — has been described as everything from an “absurd fantasy” created by Brexiteers to a “truly modern, future-facing project” in the wake of Britain’s departure from the European Union.

First mooted a year before the 2016 Brexit referendum, CANZUK would see the four countries build on the Five Eyes intelligence alliance — which also includes the United States — while bolstering trade, foreign policy and defense cooperation.

Five years on, the proposal has yet to become a serious policy objective of any of the four governments, but as the end of the Brexit transition period approaches, where Britain leaves the EU’s single market and customs union on December 31, momentum for CANZUK is growing.

“You’d have the second-most-powerful geopolitical union in the world behind the EU and quite possibly the fourth-largest economic union behind China,” Craig Tiedman, director of Policy and Research at the trans-Atlantic think tank The Henry Jackson Institute, told DW.

After all, the proposed bloc would meld three of the world’s Top 15 economies — along with New Zealand, which lies in 54th place — and cover more than 136 million people. Combined, CANZUK would have the world’s largest landmass and therefore supply of natural resources.

Tiedman said the proposed alliance would benefit from a common cultural heritage and the shared use of the English language, while other proponents think CANZUK could permit the increased mobility of the four countries’ citizens for work, study and retirement, similar to the EU’s Freedom of Movement, and even a common passport. 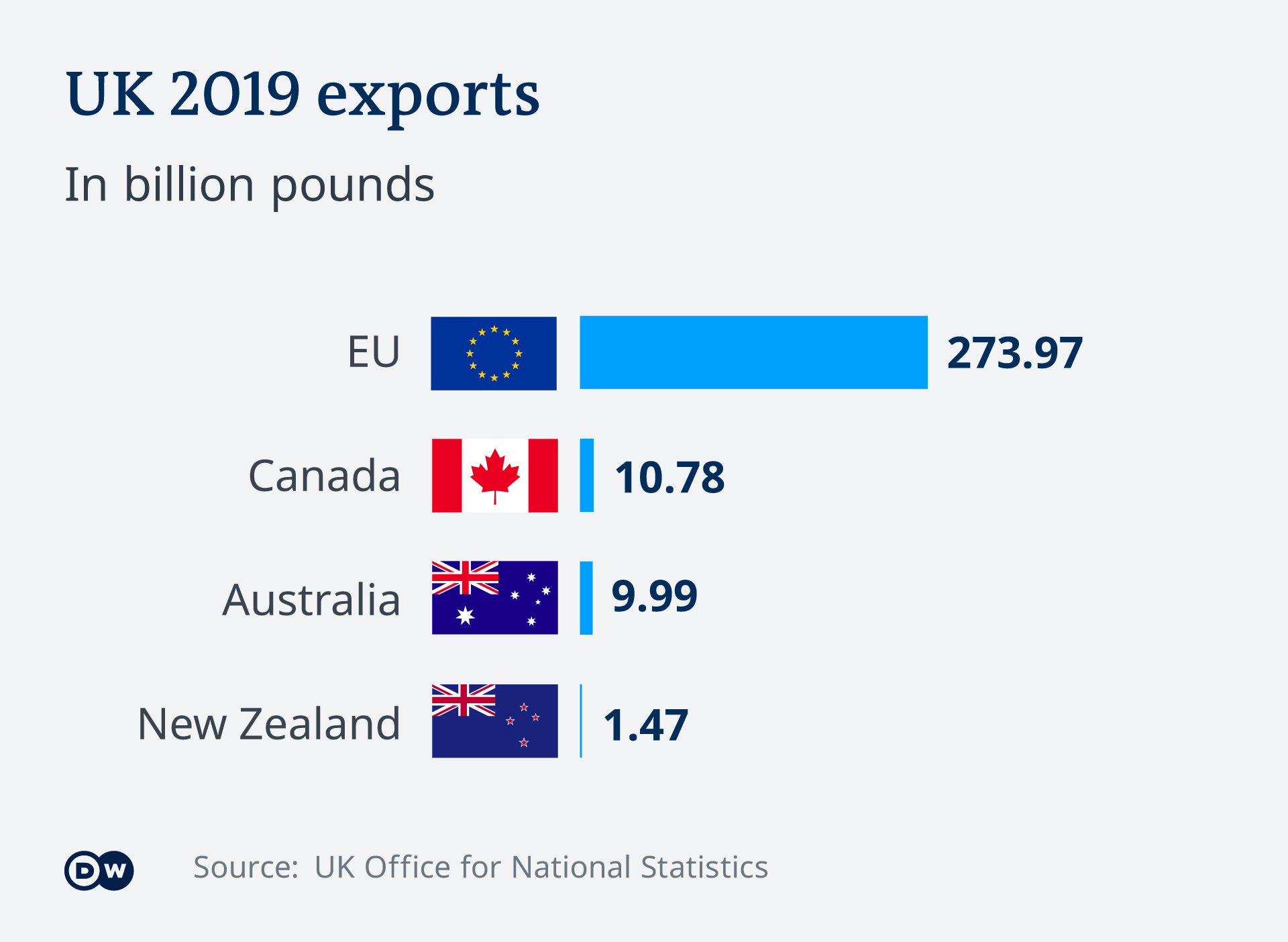 While the cultural benefits are potentially enormous, what Britain really needs after Brexit is an economic shot in the arm. In September, the London School of Economics warned that UK gross domestic product (GDP) would take a 5% hit over the next 15 years, even if the country finalized a new trade deal with Brussels by the end of the year. In a no-deal scenario, where the country trades with the EU according to World Trade Organization rules, GDP would shrink by 7%.

While CANZUK offers some hope of securing Britain’s future economic strength, it can in no way compensate for EU market access. In 2019, Britain exported £274 billion (€304 billion, $370 billion)  worth of goods and services to EU countries. The bloc is the country’s largest trading partner, accounting for 47% of the UK’s total trade. Canada, Australia and New Zealand together account for just 3.5% of UK trade.

Iain Begg, a professorial research fellow at the European Institute, London School of Economics and Political Science, told DW that arguing that CANZUK could replace the loss of EU-UK trade is just “tinkering.”

“Even if you double that 3.5%, you’re barely going to compensate for, let’s say, the loss of the Polish market and the Romanian market, let alone the fact that a more significant proportion of British trade goes to countries like Germany, the Netherlands, Belgium and France,” he said. 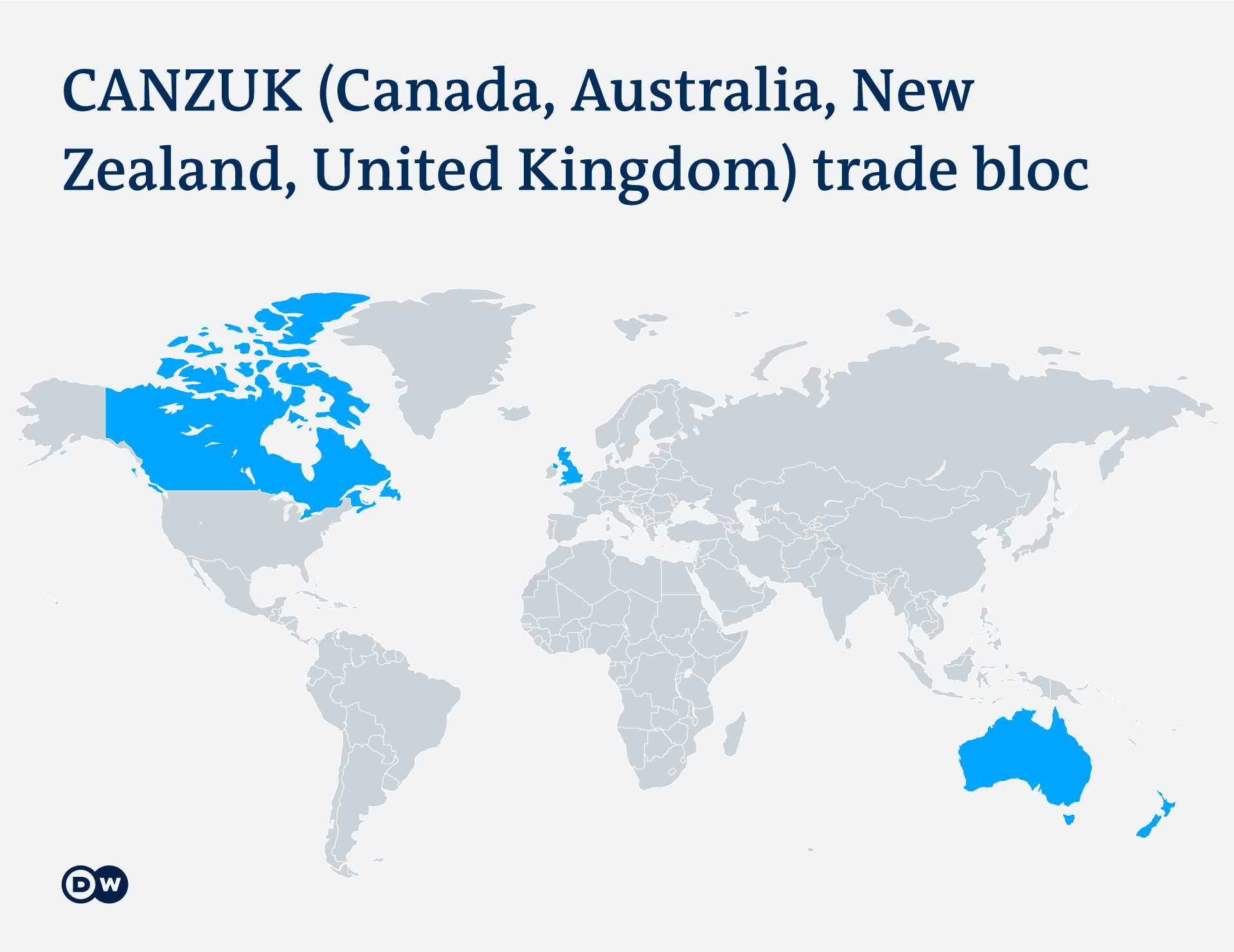 Critics of CANZUK point to the obvious distance between the four countries that will make the trade in goods unpractical. Canada, for example, is 14,150 kilometers (8,793 miles) away from Australia. Britain and New Zealand are separated by 18,389 kilometers.

Begg cited the gravity model of economic trade, one of the most robust empirical findings in economics which found that countries “trade most closely with your biggest trading partners and those closest to you.”

“The auto industry is the most striking example, where the finished car exported from Germany or the UK may well have components that cross borders six or seven times in the process of manufacturing. And you cannot do that at very long distances,” he told DW.

CANZUK proponents, however, point to China, the world’s No.1 manufacturer, whose goods easily reach similar long distances. They say cooperation between the four countries could extend to high-tech innovation and even space exploration. Just as the trade bloc itself remains a blueprint, a hypothetical CANZUK space agency has even been mooted.

While CANZUK has been widely touted as an EU alternative for Britain, Tiedman from the Henry Jackson Institute told DW that, perhaps most importantly, momentum for the alliance is being increasingly driven by the threat posed by China, and in particular “the aggressive nature of the Chinese Communist Party” in countering the rules-based international order and trade regimes.

Less publicized than the US-China trade war, Australia has recently felt Beijing’s wrath following Canberra’s call for an inquiry into the origins of the coronavirus pandemic.China responded with a ban on Australian imports, including its lucrative natural resources. Canada-China relations have also hit the skids, sparked by the arrest of an executive of the Chinese telecoms giant Huawei two years ago. Beijing recently threatened Britain with consequences after accusing the country of interfering in the Hong Kong pro-democracy movement.

While CANZUK is an idea being driven primarily by rightwing politicians and think tanks, there is hope that the incoming US administration of Democrat Joe Biden would likely support the proposed bloc as it would allow the creation of a third pillar of Western power, alongside the US and the EU.

“From what I’m hearing, Biden wants to strengthen ties among liberal democracies, to strengthen institutions that China has weakened, and make them fairer,” Tiedman told DW.

CANZUK might not be built to come to Britain’s Brexit rescue, and may not exist as a trade bloc for some time, Tiedman added, but he said the case for its creation for strategic defense purposes was stronger than ever.

Scientists peer into the 3D structure of the Milky Way: Survey of the sky pushes the boundaries of what we know about the structure of our galaxy