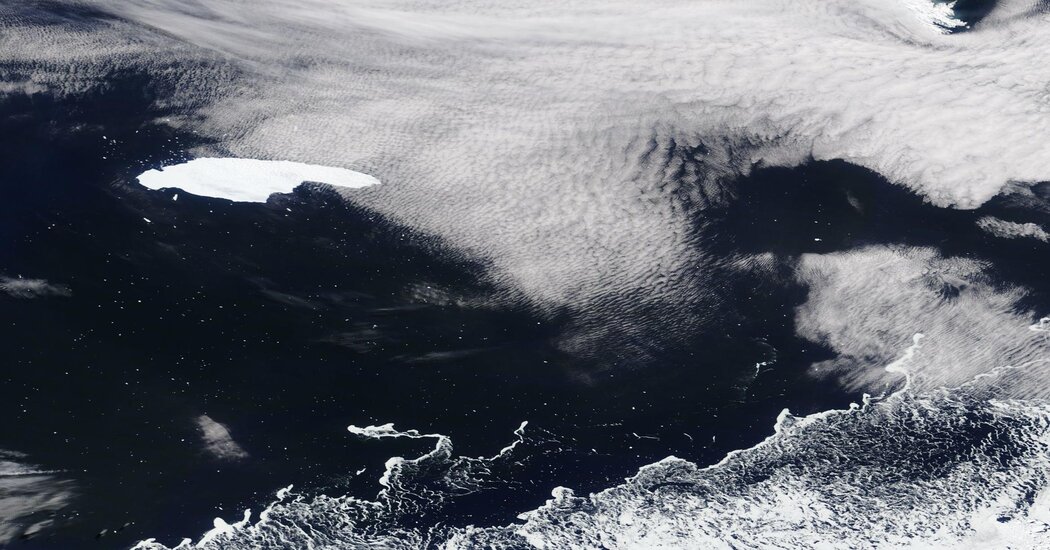 An iceberg roughly the size of Delaware that is headed toward the sub-Antarctic island of South Georgia has experts worried about the possibility of it blocking wildlife from food sources and threatening the island’s ecosystem.

The iceberg, known as A68a, was about 400 kilometers, or about 250 miles, away from the coast of the British island territory of South Georgia as of Wednesday, the British Antarctic Survey said.

The iceberg may run aground near the island and be a few weeks out from the island’s coast, said Andrew Fleming, a remote sensing manager with the survey.

The iceberg broke off from the Antarctic Peninsula in 2017 and is about 100 miles long and 30 miles wide. The trajectory of the iceberg could change and steer clear of the island, because it’s in the strongest ocean current where waters are not impeded by continents. This means the iceberg could easily sail past the island, all depending on the course nature takes.

It’s unpredictable what could happen if the iceberg were to run aground near South Georgia, said M Jackson, a glaciologist who is an explorer with the National Geographic Society. Such episodes are not unheard-of but greater attention is usually given to them when they pose a threat to people and wildlife, she said.

There is a chance that if A68a does run aground, it could disrupt part of South Georgia’s ecosystem, affecting some of the areas and paths that animals, such as seals and penguins, travel to hunt and gather food.

Douglas R. MacAyeal, a professor of geophysical sciences at the University of Chicago who has studied the behavior of large icebergs, compared A68a with another large iceberg, B-15A.

In the 2000s, B-15A struck parts of Ross Island in the Ross Sea as well as the other icebergs surrounding it, disturbing the island’s penguin colonies. Some colonies went years without hatching chicks. The disturbance led to some penguins interbreeding with those from different colonies.

“This led to a genetic benefit of exchange, of genetic material from different, normally isolated, cohorts,” Dr. MacAyeal said in an email. “In my view: If A68a were to encounter the island itself or the shoals around it, it would be spectacular for a few days but would not lead to an ecosystem catastrophe.”

Some experts predict A68a will eventually break into large pieces as a result of strong currents.

“The Southern Ocean around South Georgia is an utterly wild place with strong currents and sea-swell that will ‘flex’ the iceberg on top of the grounding point, causing it to stress and fracture much like a ship,” Dr. MacAyeal said.

If the iceberg does break close to the island’s coast, there’s the potential that it could displace large amounts of seawater “that can inundate coastal communities,” Dr. Jackson said.

This kind of hazard is something experts have had to grapple with as climate change has led to ice melting and ice systems breaking at significant rates.

“I am doubtful given the increasing rate of ice melt worldwide that this is the last time we’ll see this,” Dr. Jackson said. “I wouldn’t be surprised in the years to come if we continue to see bigger icebergs presenting bigger hazards to communities of people and wildlife alike.”