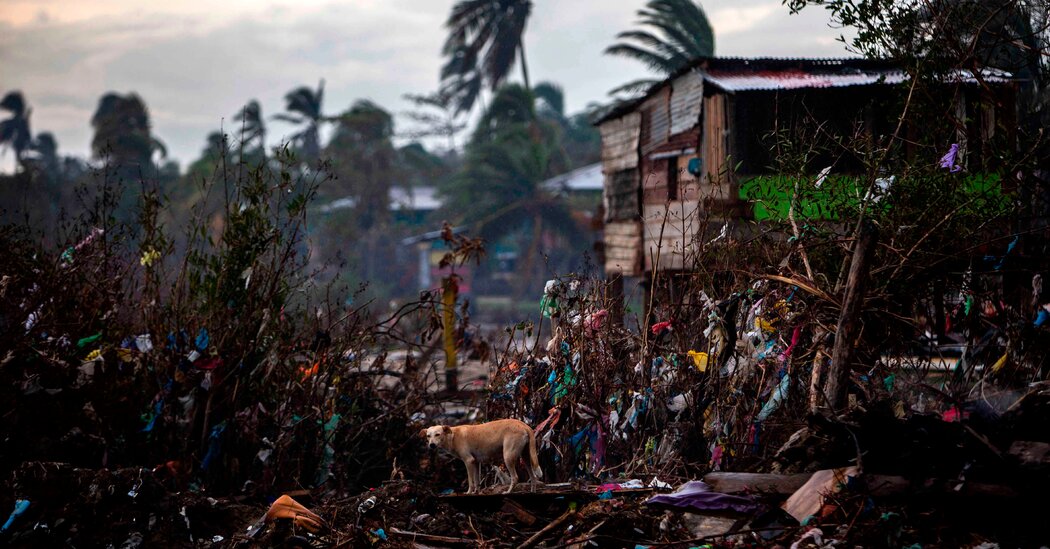 PUERTO CABEZAS, Nicaragua — The situation was all too familiar for Marina Rodríguez: A destructive storm in what has been a record-setting Atlantic hurricane season was bearing down on the Mosquito Coast.

The previous storm, Hurricane Eta, washed away her home less than two weeks ago, said Ms. Rodríguez, 47, whose children were helping her build a temporary shelter on Sunday.

As Hurricane Iota intensified and inched closer to the coastline of Nicaragua and Honduras, it appeared that there would be no reprieve for Ms. Rodríguez and many others weary residents of the region.

The storm, which was upgraded to a Category 5 hurricane Monday morning, was expected to make landfall by Monday night, according to the National Hurricane Center in Miami.

“I am afraid of the sea level,” Ms. Rodríguez said. “You can see the water coming up and up every minute, so I guess we will have to evacuate.”

Those in the path of Hurricane Iota were not the only ones comparing it to Hurricane Eta.

“It’s eerie that it’s similar in wind speed and also in the same area that Eta hit,” said Dennis Feltgen, a spokesman and meteorologist with the National Hurricane Center.

The storm’s impact will be felt “well before the center makes landfall,” Mr. Feltgen said.

The storm was 100 miles southeast of Cabo Gracias Dios on the border of Nicaragua and Honduras with maximum sustained winds of 160 miles per hour, the National Hurricane Center in Miami said on Monday morning. The storm was moving west at 9 m.p.h. Iota was expected to make landfall in the area on Monday night.

A hurricane warning was in effect for several cities along the coast of both countries, where the storm was expected to produce up to 30 inches of rain in some areas through Friday. The intense rainfall could lead to significant flash flooding and mudslides in higher elevations, the center said, and that Iota was forecast to make landfall in northeastern Nicaragua and eastern Honduras on Monday night.

Forecasters warned that damage from Hurricane Iota could compound the destruction caused by Hurricane Eta in Central America.

More than 60 deaths were confirmed throughout Central America from Hurricane Eta. In Guatemala, rescuers feared that more than 100 people had been killed in the village of Quejá after the storm chopped off part of a mountain slope.

Many people in the region were left homeless after a number of structures were damaged or destroyed. “Shelter is going to be a problem,” Mr. Feltgen said.

Dozens of Indigenous communities were evacuated starting on Saturday night in Nicaragua and Honduras. In Puerto Cabezas, families were sleeping amid the rubble left from the previous hurricane.

Elsewhere in the country, it was not immediately clear how many people had been transferred to shelters, but photos taken by residents showed hundreds of people being evacuated in Cabo Gracias a Dios and other remote villages.

SINAPRED, the National System for the Prevention, Mitigation and Attention of Disasters in Nicaragua, had also suspended sailing and fishing in nearby waters.

Sadam Vinicius, a father of three, decided to stay with his family at their home near the coast. Afraid of losing his roof, he tried to save it from damage by tying it up with ropes he uses for his work as a fisherman. “We have not received any aid from the government yet,” Mr. Vinicius said. “I am afraid of losing my roof.”

The 2020 Atlantic hurricane season, which is set to end on Nov. 30, has seen 30 named storms and 13 hurricanes. Meteorologists exhausted the 21-name list that is used each season, turning to the Greek alphabet to name systems. The last time the Greek alphabet was used was in 2005, which saw 28 storms strong enough to be named.

Scientists have found that climate change affects how hurricanes form and strengthen; rising ocean temperatures linked to global warming can cause storms to weaken more slowly and remain destructive for longer. In a recent study, scientists found that 50 years ago a typical storm would have lost more than three-quarters of its intensity in the first 24 hours, when it might travel several hundred miles inland, but now it would only lose about half.