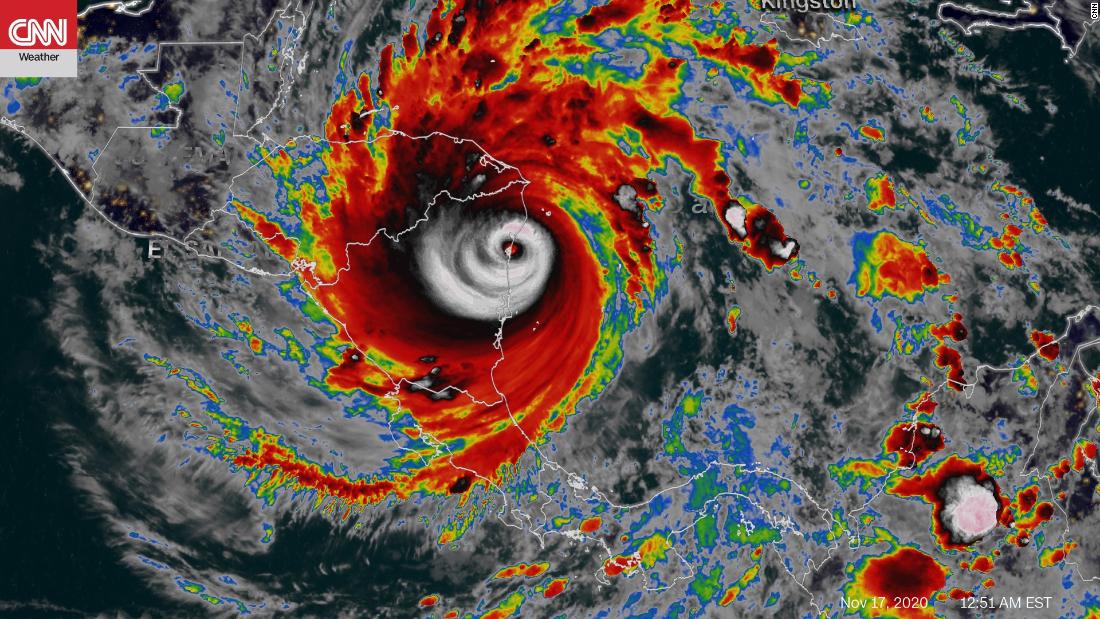 19
Share
The storm reached Category 5 strength, but made landfall near the town of Haulover, Nicaragua, at 10:40 p.m. EST as a Category 4, with maximum sustained winds near 155 mph, according to the National Hurricane Center. It has since weakened to winds near 130 mph.
Those in the area have begun to withstand heavy rainfall from the storm, with Honduras and Nicaragua expecting maximum totals of 30 inches of rain through Thursday, while El Salvador to Panama can expect 6 to 10, with isolated maximums of 15 inches. River and flash flooding may soon follow along with dangerous storm surge that is likely to bring water levels up by as much as 10 to 15 feet, the National Hurricane Center said in a 1 a.m. alert.

The predicted storm surge along the coasts of Nicaragua and Honduras will be accompanied by “large and destructive waves,” along with swells that cause “life-threatening surf and rip current conditions,” according to the advisory.

Hurricane warnings are in effect for the coast of Nicaragua from its border with Honduras to Sandy Bay Sirpi, as well as the coast of northeastern Honduras, the NHC said. Tropical storm warnings are also in place for Providencia, San Andreas and Bay Islands.

Though the storm struck Central America with devastating impact, it is expected to weaken after landfall and then dissipate over the region by Wednesday night.

Before reaching Nicaragua, the hurricane became the first of its strength to strike the Colombian Islands of San Andres and Providencia in recorded history, Colombia President Ivan Duque said Monday.

San Andres and Providencia have been part of Colombia for centuries but are geographically closer to Central America than to the Colombian mainland.

Duque said Monday at least one person is dead on Providencia and 90% of the island’s infrastructure has been affected by Iota. The local airport is also unusable because of debris, Duque said.

“It’s the first time that a Category 5 Hurricane has reached our territory since records began,” Duque said during a national news conference from the Colombian capital of Bogota. “We are facing an issue with characteristics never before witnessed by our country.”

A Navy boat was scheduled to depart Cartagena Monday night on its way to Providencia with supplies, Duque said.

Iota will be the second major hurricane to hit the area in as many weeks. On November 3, Hurricane Eta made landfall as a Category 4 storm, causing landslides and flooding that displaced thousands and left scores of people dead or missing.
It is the 13th hurricane of the 2020 Atlantic hurricane season, which has left its mark as a historic season bringing 30 named storms — the most ever. This is the latest in the year there has ever been a Category 5 hurricane in the Atlantic Basin, according to the hurricane center.

More than 3.6 million people across Central America have been affected by the storm to varying degrees, the Red Cross said earlier this week.

While the full extent of the damage from Eta won’t be known for a while, the powerful storm, combined with the coronavirus pandemic, may have effects that last for years.

The storm hovered for days over Nicaragua, Honduras and Guatemala, with heavy rains creating flooding and landslides that wiped entire communities off the map.

Dozens of people in the remote Guatemalan village of San Cristobal remain missing after a landslide swept through last week, leaving mud 50 feet deep in some places.