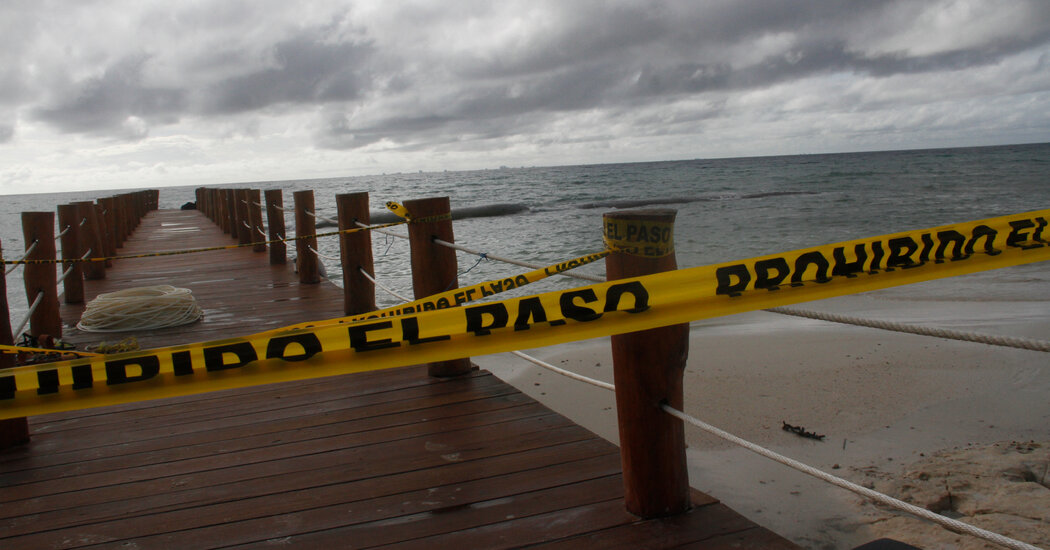 MEXICO CITY — Hurricane Delta made landfall in southeastern Mexico near the tip of the Yucatán Peninsula early Wednesday, knocking out power, felling trees and causing scattered flooding in cities and towns along the Caribbean Coast. But regional and federal officials said they had received no reports of deaths.

The storm hit near the port town of Puerto Morelos, just south of Mexico’s tourism epicenter, Cancún, around 6:30 a.m. Eastern time, with maximum winds estimated at about 110 miles per hour, according to the United States National Hurricane Center. By early afternoon, the center of the storm had crossed the peninsula and moved into the Gulf of Mexico, north of the Dzilam de Bravo State Reserve.

The hurricane had been downgraded overnight from a Category 4, making landfall as a Category 2. But forecasters predicted that the storm would once again gather strength as it barreled across the southern and central Gulf of Mexico on Wednesday and Thursday before approaching the Gulf Coast of the United States on Friday.

Delta was moving northwest at about 17 miles per hour with maximum sustained winds of about 100 miles per hour and higher gusts as of Wednesday afternoon, the National Hurricane Center said.

The governors of Alabama and Louisiana declared states of emergency on Tuesday, and several coastal areas began mandatory evacuations on Wednesday.

College football officials said Wednesday morning that Saturday’s game between Louisiana State University and the University of Missouri would be moved from Baton Rouge, La., to Columbia, Mo. The Southeastern Conference, whose membership includes both schools as well as 12 other universities, also left open the possibility that the storm would affect other athletic events in the coming days.

In Mexico, Luís Alberto Ortega Vázquez, a top official with the national civil protection agency, said Wednesday morning that there had been no immediate accounts of deaths owing to the storm but said that the authorities had received reports of fallen trees and damage to the Yucatán Peninsula’s electrical grids.

Though the hurricane’s impacts in Mexico were apparently not as severe as anticipated when it reached Category 4 status on Tuesday night, the storm will almost certainly set back the Yucatán Peninsula’s efforts to revive its tourism industry, which has been severely affected by the coronavirus pandemic.

“What we have to do is get back our feet quickly,” Carlos Orvañanos Rea, spokesman for the government of the state of Quintana Roo, said on Wednesday in an interview with the FOROtv cable news channel. “We are on a path of economic reactivation.”

Visitors to the region were breathing a sigh of relief on Wednesday as the hurricane delivered a lesser punch than many had feared.

Luís González, 35, a publicist for musicians, was holed up in a hotel in the coastal city of Playa del Carmen, south of Puerto Morelos, as the storm lashed the region Wednesday morning. He had been visiting the beach town of Tulum and had planned to fly back to Mexico City on Tuesday night, but learned late Tuesday afternoon that the flight had been canceled.

He knew one of the owners of a hotel in Playa del Carmen “where people shelter in hurricanes,” he said, so he made a beeline there. He and other guests were given rooms in the rear of the hotel, away from the water, and provided with a dinner buffet and a box lunch for the morning.

Mr. González likened the hurricane to a normal, intense storm with periods marked by “continuous gusts of wind with rain.”

Preparations for the storm’s arrival began earlier in the week as the hurricane drew a bead on Mexico, with activity growing feverish on Tuesday as residents across the Yucatán Peninsula stocked up on days-worth of groceries, hardware materials and gasoline, and pulled boats from the water and moved them inland. Government officials ordered nonessential businesses to close as emergency crews helped evacuate inhabitants from low-lying coastal areas and islands and relocate them inland.

Scores of hotels along the Caribbean Coast — including in popular tourism destinations like Cancún, Playa del Carmen and Tulum — moved their guests to shelters.

“The most important thing is to take care of everyone’s life so that we don’t lose anybody,” said Carlos Joaquín, the governor of the state of Quintana Roo, which borders the Caribbean coast of the peninsula.

On Wednesday morning, Mr. Ortega Vázquez, the federal civil protection official, said that more than 39,000 people, including residents and tourists, had been evacuated from hotels and homes in the states of Quintana Roo and Yucatán, with many seeking refuge in scores of temporary storm shelters.

While the exact track of the storm remains uncertain, there is a risk of dangerous storm surge, wind and rainfall along the coast from Louisiana to the western portions of the Florida Panhandle beginning Thursday night or Friday.

Dennis Feltgen, a meteorologist and spokesman for the U.S. National Hurricane Center, said the conditions would be ideal for the storm to strengthen back to a Category 4 as it passed through the southern Gulf of Mexico and approached the United States as a “major hurricane.”

It has been a brutal year for hurricanes on the U.S. Gulf Coast, which was heavily battered by Laura in September. That hurricane caused more than two dozen deaths and extensive property damage.

Delta is the sixth named storm to put Louisiana in its potential path; while the state largely avoided wide-scale destruction from Cristobal, Marco, Sally and Beta, each storm brought to the area a fresh round of evacuations and fear.

About four to eight inches of rain are expected in some areas of the central Gulf Coast, with up to 12 inches in some areas, along with flash flooding, the Hurricane Center said.

“Folks there should make sure they have their hurricane plan in place, have their supplies and monitor the updates to the forecasts,” Mr. Feltgen said. “I know there’s a lot of hurricane weariness out there with Laura and Sally so fresh on everybody’s minds, but here we go again.”

The Hurricane Center recommended that people monitor forecasts frequently, as storms can quickly slow down, grow stronger or shift track, he said.

This hurricane season has been one of the most active on record, experts said.

Last month, meteorologists ran out of names after a storm named Wilfred formed in the Atlantic. Subtropical storm Alpha, the first of the 24 letters of the Greek alphabet, quickly formed thereafter, becoming the 22nd named storm since May.

Forecasters have resorted to the Greek alphabet only once before, in 2005, when meteorologists used six Greek names in a season that had 28 storms, Mr. Feltgen said.