How ViacomCBS produced its first TikTok-focused reality show during a pandemic, which was filmed in an NBA-style bubble | Markets Insider 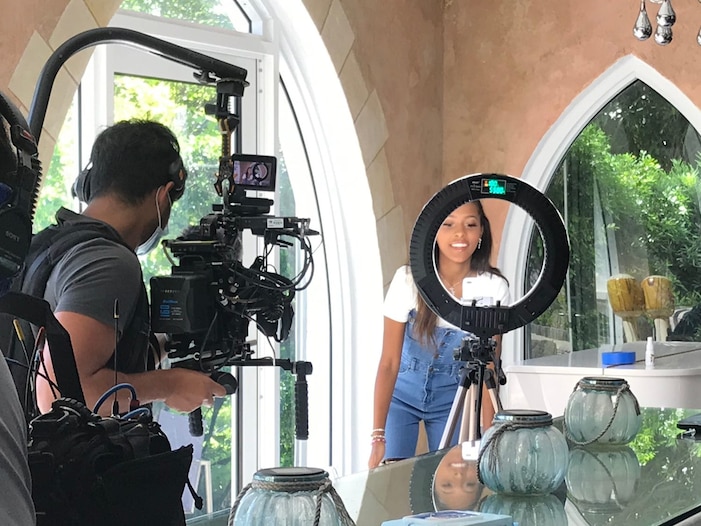 In a teaser for AwesomenessTV’s new reality show, “Next Influencer,” there are no signs that its stars are filming during a pandemic.

A swarm of teenagers in bikinis and swim trunks splash around in a pool, take a group selfie in front of a ring light, and climb on each other’s backs.

“There is [an] actual pandemic and y’all out here trying to get views,” one YouTube commenter wrote.

What viewers don’t see in the trailer is that the production team created an NBA-style “bubble” to protect its cast and crew from COVID-19-related risks during its 10-day shoot at a Miami Beach mansion.

“We’re part of ViacomCBS, so we have very strict COVID rules that we have to abide by,” said Emily Hecht, executive producer for the show, which premieres this Sunday. “We fully created a bubble in a Miami mansion. [An] amazing house to incentivize the kids to want to spend a bunch of time there because you could not leave once you’re in.”

“Next Influencer” is a cross between a traditional MTV-style reality show like “The Real World” and a series of “collab” videos between a group of TikTok friends.

The project, hosted by TikTok star Alex Warren, features nine up-and-coming TikTok creators who compete to win a talent and content development deal with AwesomenessTV. The group faces off in a series of challenges that range from in-person foot races to virtual contests like posting a TikTok “duet” with Warren. All episodes of the show were shot at a Miami Beach mansion overlooking the Indian Creek canal (where MTV’s “Jersey Shore Family Vacation” was filmed).

Producing shows during the coronavirus pandemic has created an array of challenges for traditional media brands. ViacomCBS put together a COVID-19 production task force to set testing protocols, PPE requirements, order cleaning and disinfection services, and vet vendors for compliance on set. Other producers have cut scenes with crowds and used camera tricks to avoid making cast members get too close.

While AwesomenessTV didn’t advertise its health precautions in its show’s trailer, the team is including safety disclaimers at the start of each episode to inform users that “scenes in this episode were filmed adhering to then-current Local, State, and/or Country mandated COVID-19 guidelines and restrictions.”

All cast and crew were tested repeatedly, including before arriving to set and throughout filming, a representative from Viacom said. AwesomenessTV also plans to post behind-the-scenes footage about the show’s COVID-19 safety protocols, including “a day in the life” video where the cast shares what COVID-19 testing looked like on set.

As it launches its first TikTok-oriented reality show, the team at AwesomenessTV had to strike a balance between acknowledging the realities of a global pandemic and offering fans an escape from that reality.

“It won’t be a main focus on the storyline because as a consumer, we know that there’s fatigue around that,” Hecht said. “We don’t want to relive some of the moments that we’ve already lived once through.”

Despite production obstacles, the timing is prime for media companies to capitalize on a spike in interest in YouTube and TikTok stars.

Social-media use has jumped during the coronavirus pandemic, lifting views on most content categories. Influencer James Charles’ YouTube-produced show “Instant Influencer,” which premiered in April, drew tens of millions of views and was renewed for a second season. And interest in the social-video app TikTok has exploded this year, which led AwesomenessTV to focus on TikTokers when casting for “Next Influencer.”

“With the popularity around TikTok, we knew we wanted to include a TikTok house,” Hecht said, referring to a “collab” house trend in which TikTok creators work in groups to post content together. “No one was really doing anything yet. There were a couple of development deals signed with some of the bigger houses, but nothing was really moving.”

After reviewing video auditions from a narrowed-down list of three TikTok creator collectives, the AwesomenessTV team chose its nine TikTok contestants from a Miami-based creator group called Project 305. Its host, Hype House member Alex Warren, is one of TikTok’s biggest stars with over 13 million followers on the app.

“We thought if we’re going to do a show around an emerging TikTok house, who better to be adviser, mentor, judge, and host than someone from Hype House,” said RJ Larese, VP of talent & development at Awesomeness Digital Studio. “It was the first major TikTok house that came on the scene.”

Unsurprisingly, social media is a key part of how AwesomenessTV is promoting its show. All of its stars are contractually required to post about the project, and the company created a phone number using the text-marketing platform Community so that fans can get sneak-peek messages from the show.

“We’ve signed up thousands of people since Tuesday when it launched, and it’s just a fun new way that’s organic with our audience to communicate with Awesomeness,” Hecht said.

The drama and big personalities that blew up reality shows like MTV’s “The Real World” (1992) and CBS’s “Big Brother” (2000) helped usher in a new content category. And TikTok stars, who have already shown they know how to play up controversy for views, are well positioned to take over the reality TV format.

“Reality shows are not a new thing,” Larese said. “A TikTok house is not really a new idea. There were things like Team 10 and YouTube houses, and this is just the updated version of it.”

One thing that has changed since 1992 is the advent of social media and on-demand viewing, which allow fans to check in on their favorite reality stars at virtually any moment.

“It’s just the modernization of the Real World format,” Larese said. “Places like YouTube and TikTok and Instagram and social media in general have been able to [make it] happen 24/7. If talent wants to give you access to their life, they can do it completely unfiltered, not on a TV show now. I’m not diminishing the value of TV shows by any means, but there are less constraints [on] social media.”

For more stories on how media companies are leaning into TikTok and social media, read these other Business Insider posts:

Best USB-C power adapters for the iPhone 12: How to shop and what to buy