How to trade the ‘McConnell Cap’ as Republican Kentucky senator has become Stimulus-in-Chief, according to a $400 mln wealth manager | Markets Insider 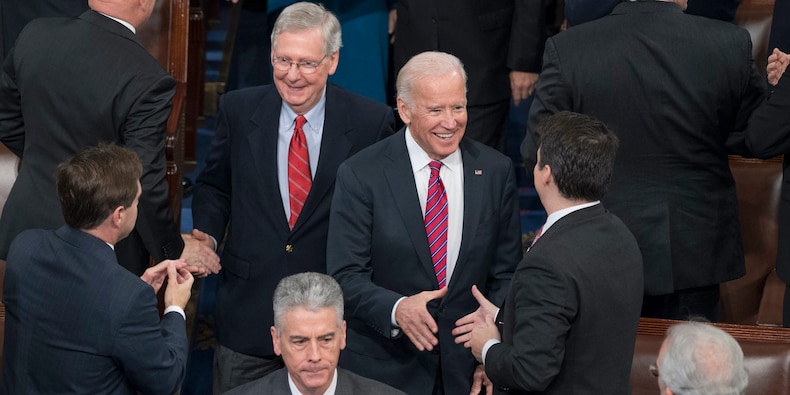 Joe Biden may have won the presidency, but the Democrat campaign he led didn’t win over the electorate in the Senate and local races. Although the Democrats could still win a slim majority in the Senate – with January’s two run-off elections in Georgia – the consensus is that it’s going to go the Republicans’ way.

So, what does that mean for the stimulus package which the American economy is in need of? Ultimately, its fate lies with the one person more powerful than the President-elect themselves – Republican Senator, and presumptive Senate majority leader, Mitch McConnell – says Sam Solem, portfolio manager at Intrepid Capital.

With the power over the size and scope of any stimulus package Mitch McConnell has the ability to place the ‘McConnell Cap’ on any of Biden’s plans, giving him the higher ground in any negotiations on economic and fiscal stimulus.

“I think the Senate is the most important part of the United States branch of government, and that’s what we’ve been telling clients for the past few months,” he said. “Congress holds the spending power, it appropriates money… any tax policy, any legislation has to go through the Senate and so that’s why this split government is a big deal.”

Strategists from major banks, including Goldman Sachs, are already expecting a slimmed-down package of measures to directly support the economy. But, there is still huge uncertainty over the size and scope of the deal that will be reached between the Biden White House and Republican leadership.

“I think that McConnell will certainly exercise his power to the fullest extent,” he said, adding that the ‘McConnell Cap’ will inhibit any ability for Biden to flex his presidential muscles in regard to monetary policy.

“Stimulus isn’t going to go through without McConnell’s support, so he is crucial in the process,” Kiran Ganesh said, Multi-Asset Strategist at UBS Global Wealth Management said.

Under a ‘Blue Wave’ scenario, UBS had forecasted a package worth more than $2 trillion, but that’s all changed.

“We think it very unlikely that a Republican Senate is going to approve any increase in tax rates, so any additional stimulus would need to come from borrowing. In our base case we’re anticipating stimulus in the order of $500 billion to $1 trillion (or 2.5% to 5% of GDP), with a focus on narrower, more-targeted Covid relief packages,” Ganesh said.

A cap isn’t necessarily a barrier

However, even with ideological divides, there is cause for hope of a deal.

Firstly, it is not in the Republicans’ favour to be regarded as a barrier to financial aid, according to a UBS note.

McConnell “does have an incentive to complete a deal before the run-off election on 5 January for the two Georgia Senate seats,” Ganesh explained. “Showing a Republican-led Senate can work in a bipartisan fashion, rather than being a roadblock, could be an important signal to Georgia voters who may fear policy gridlock.”

But, it is important to note that “President Trump would also need to approve stimulus if it is to go through before the end of the year, which is a complicating factor since his behavior in this scenario is unpredictable, so perhaps more likely it ends up being early next year,” Ganesh added.

Biden has political capital in the form of an existing relationship with McConnell and a mandate to reach across the aisle.

“It doesn’t mean they can’t get something done and both Joe Biden and Mitch McConnell are very experienced, very pragmatic. They both understand what it takes to get things done in DC. They’re both very strong establishment candidates much different than the Trump administration,” Solem said, adding that Biden ran as a moderate, meaning there is room for negotiation between the two sides.

“I think there is some wiggle room to get something done, Biden will have to give something up in order to raise taxes, but we think the market was celebrating [on Monday] because we don’t see much change on the tax problem with the split government,” he added.

Despite McConnell’s power over monetary spending, the Biden administration does have regulatory and trade policies at its disposal.

How to trade the “McConnell Cap”

Clean energy and multinational corporations will benefit the most “as Biden is much more of a globalist than Trump is,” Solem said, adding that dirty energy and financials are set to suffer.

“The Democrats have made the green new deal a huge part of their platform and we think most Americans and most people around the world for that matter agree that we have to do something about the climate. It’s not something we can get around,” he said

However, Solem notes that energy infrastructure remains attractive. “The clean energy move will be a transition, it’ll take time and we’re still gonna have to move, in particular, natural gas around the country. So we like pockets of value in the energy space, but in general we are avoiding it,” he said, adding that financials also face scrutiny.

“Whether it’s Elizabeth Warren [as] Treasury Secretary or not, Biden will place a lot more regulation on the financial industry, and banks are already facing 0% interest rates, so it’s just further headwinds for them,” he concluded.

One change Solem is making to his portfolio has been to add to his precious metals weighting, he said.

“A Democratic president with a Democrat house is going to be much more inclined to spend more money regardless of the fiscal situation,” he said, adding that with America’s bi-annual election his firm is taking a long-term view that “even if the Republicans win the Senate here in January, there’s another election in 2022, so Biden could still get a unified government then.”