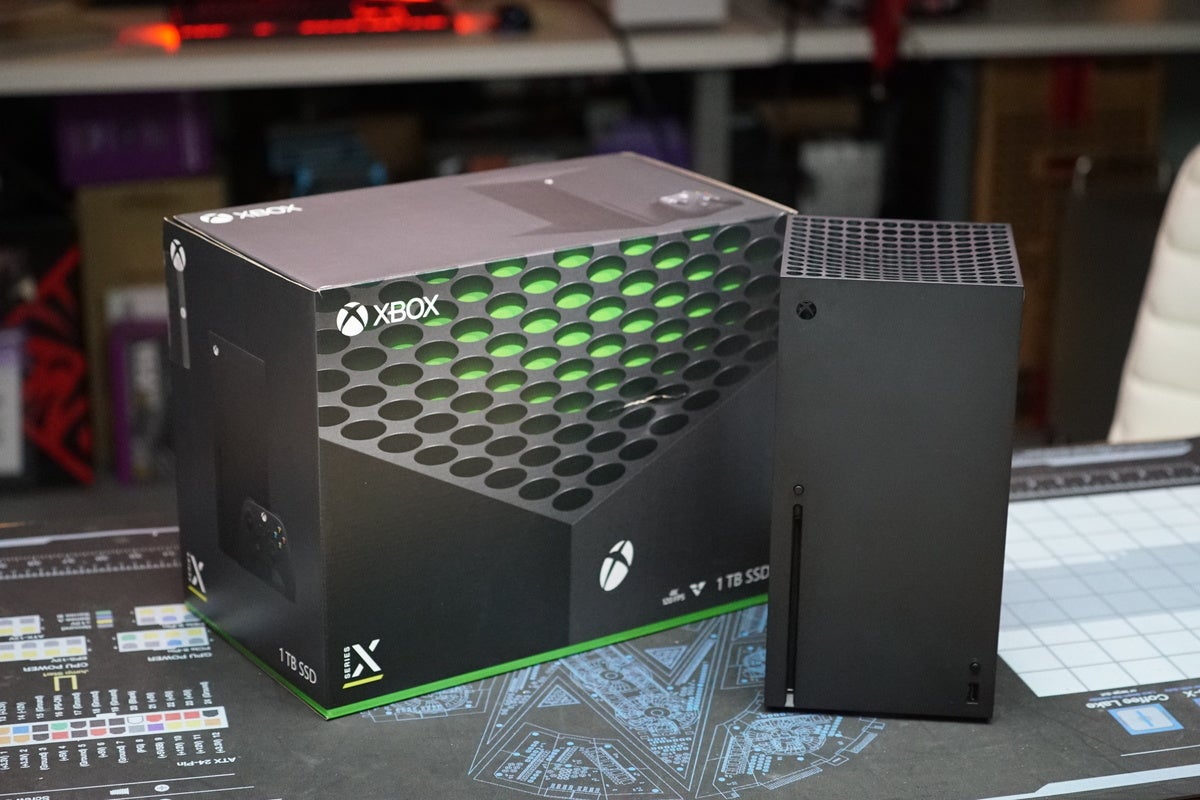 Hotly anticipated Radeon cards expected to sell out. Shortages of GeForce GPUs. Even if you wanted to build a gaming PC right now, obtaining the all-important discrete GPU is practically impossible. But there is an alternative: The Xbox Series X.

For the past week or so, I’ve tested a $499 Xbox Series X console provided by Microsoft. Announced Thursday and due to ship November 10, it remains one of the most accessible ways to play next-gen games at PC-like resolutions and frame rates. There are also a few things it can do that the PC can’t.

So who needs a gaming PC? Read on to see why you don’t.

The GPU shortage is real. Nvidia’s cards are selling out within minutes. Gamers are livestreaming and liveblogging their attempts at purchasing them. What good is listing the best graphics cards for PC gaming if you can’t even buy one? And even if you could, the price of the RTX 3070 FE is $499, the same price as the Xbox Series X. (The slightly less powerful Xbox Series S, which we do not have, costs $299.) That’s before you start testing the waters at eBay, where RTX 3070 prices currently run $700 and above.

Gamers are already drawing similar conclusions. After initially predicting adequate supplies of the Xbox Series X, Microsoft’s Xbox chief, Phil Spencer, is now forecasting that Series X demand will outstrip supply. So while we can go out on a limb and predict that Xbox Series X prices won’t soar to stratospheric GPU-like levels, we have to acknowledge that Series X may be hard to find, too. But not as hard.

PC-like frame rates, on the cheap

Games like Rare’s pirate simulator Sea of Thieves once felt a bit sluggish, even on the Xbox One X. On the Series X, a flick of the thumbstick whips your perspective around smoothly. Microsoft claims Sea of Thieves is optimized for 60 frames per second at 4K resolutions, and I buy that argument.

The Xbox Series X was actually designed for games to offer 4K/120 gaming experiences—which means that “normal” 4K gaming on 60Hz displays should be smooth as silk. On everything I tried, it certainly was. (I’ll have to save my pennies for a 4K/120Hz display, which will cost several hundred dollars more.) All of those performance optimizations, of course, affect virtually every game available to your Xbox Series X—even older, notoriously laggy games like Player Unknown: Battlegrounds showed improvement. (Just make sure that your TV or monitor supports AMD FreeSync, or HDMI variable refresh rates, and that your display cable supports HDMI 2.1.)

HDR, raytracing give you what the PC can offer

Don’t forget about the visuals, either. One of the hidden features of the Xbox Series X is its ability to “auto-tune” games for HDR, provided that your TV or monitor supports it. (Go to General > TV and Display Options > Calibrate HDR for Games.) That means every game gets at least a little benefit from HDR, even games that weren’t specifically encoded for it—something you can’t get on a PC yet. The effect isn’t quite as good as a game that’s specifically encoded for HDR (like Microsoft’s open-world driving game, Forza Horizon 4, whose low-light visuals look amazing), but it’s still an unexpected benefit.

Microsoft did make visual improvements specifically for the Series X hardware, which are supposed to be accompanied by an “Optimized for Series S|X” badge in my games list. (I never saw those badges on my console, though my console downloaded additional patches and I saw visual differences in games like Forza Horizon 4.) Let’s not ignore DirectX Raytracing support, either—it’s commonplace among Nvidia’s RTX GPUs, but now consoles have this capability, too.

Sure, PCs will deliver higher framerates and possibly even better-looking visuals…but for a lot more money. There’s a reason why 1080p and 1440p PC gaming is still a thing—because anything more is expensive.

You know how games play on a PC: You click to run them, there’s a launch sequence with the developer, and perhaps an introductory cutscene; you begin playing; and when the game is over, you save and exit out of the application. Selecting a new game means repeating the process.

Quick Resume is perhaps the biggest advantage the Xbox has over a PC, and it’s as transformative as adding an SSD is to a laptop or desktop. (It’s perhaps telling that the Xbox Series X and S are the first Microsoft consoles to include an SSD, putting Series X load times on a par with those of a PC.)

Instead of shutting down a game and loading a new one, the Xbox OS saves the state of the game, so you can skip all of the introductory sequences and simply jump in. It’s the equivalent of pressing Skip intro while watching Netflix. And, until Microsoft adds Quick Resume to Windows, PCs can’t do this. (DirectStorage is the Windows API that may make this happen, though.)

Sure, you might say, how often do I swap from game to game? That’s not the point—in certain games, Quick Resume even survived entirely powering down the console, including manually shutting off my power strip. It’s genuinely game-changing to boot the console—instantly resuming it from a powered-on state, or booting it from a powered-down state in just seconds—and then wait a few seconds more to resume a game with Quick Resume.

About the only odd thing about Quick Resume right now is that it works best with the thousands of older Xbox One/360/original Xbox titles, as Microsoft discovered a bug with some of its newer, optimized titles. The other is that jumping back and forth via Quick Resume occasionally disconnected me from an online connection—forcing me, for example, to reconnect to EA’s servers on Star Wars: Battlefront 2. Rejoining, though, was as easy as clicking a button.

Cloud gaming: A lot cheaper than a gaming laptop

So if desktop cards are so hard to come by, why not buy a gaming laptop instead? Well, for one, mobile GPUs are still a generation behind their desktop cousins, so you won’t be able to buy a laptop with the mobile equivalent of Nvidia’s latest hardware for some time yet.

Microsoft does offer a “free” alternative: cloud gaming, also known as Project xCloud. Cloud gaming works in one of two ways: streaming games directly from your console, or else tapping into Microsoft’s “Xbox in the cloud” to deliver games over the Internet. Because there’s no Windows 10 app yet, however, your best bet is to use either your phone…or your Chromebook, which gives you the experience of a “mobile PC” but with a bit of latency attached. While we’re certainly not going to argue that cloud gaming over a Chromebook offers the same experience as a gaming laptop, it’s still a heck of a lot cheaper than buying one.

Play Anywhere games can be picked up on the PC

We’re not going to stop you from upgrading your PC when the component shortage loosens. And if you prefer playing games on your PC, that’s fine, too.

What the Xbox now offers—more and more—are so-called ”Play Anywhere” games, in which the “same” game is accessible both on your Windows 10 PC as well as the Xbox. If you don’t mind playing the Xbox controller for a bit (a number of driving and flying games are arguably pretty good with just a controller), you can pick up where you left off in a few months, without sitting out this gaming generation.

My PC-enthusiast colleagues are going to argue that yes, you should spend thousands of dollars on motherboards, CPUs, storage, GPUs, displays and more, just to eke out a few more details that your tired eyes probably can’t see anyway. I’m saying that there’s a better way: the Xbox Series XRemove non-product link. Your wallet will thank you.

Celebrate 5 years of The Full Nerd with merch!