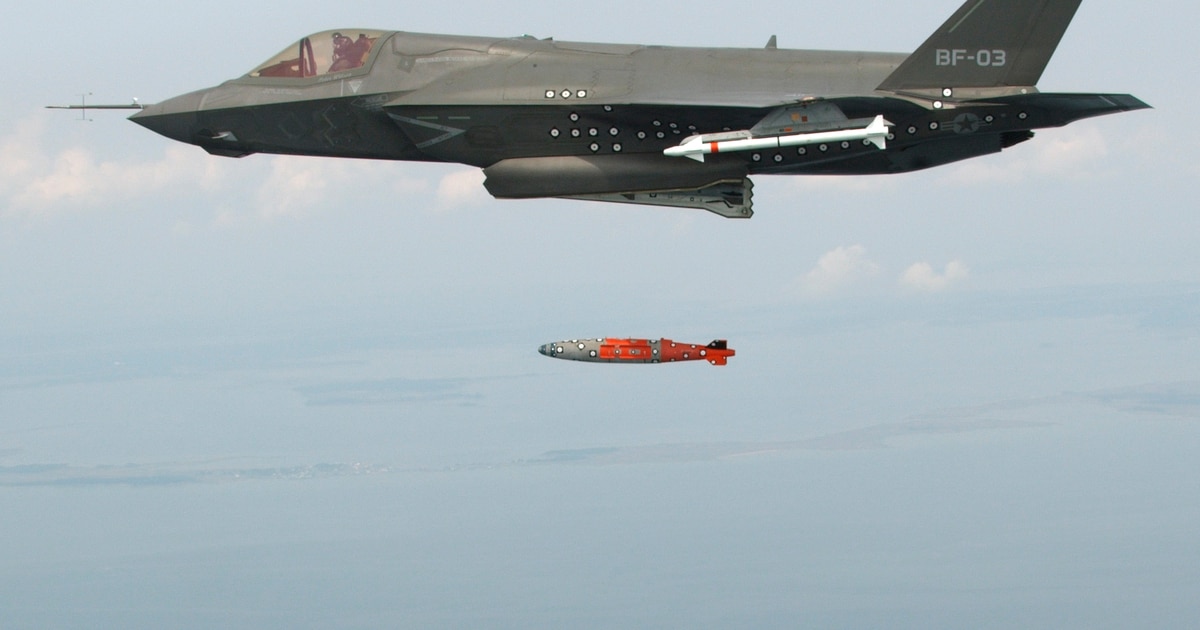 YUMA PROVING GROUND, Ariz. — During a recent U.S. Army exercise, the service was able to link a Marine Corps F-35B into its developmental networks, enabling the jet to both receive targeting data from satellites and send it to ground-based shooters.

Not only did that connection show the flexibility of the Army’s evolving tactical network, but it demonstrated the success the armed services can have as they connect different platforms.

“In some cases — I’m hesitant to use the word but I’ll use it — I think in some cases it was unprecedented,” said Willie Nelson, director of Army Futures Command’s Assured Positioning, Navigation and Timing Cross-Functional Team.

The connection occurred during Project Convergence, a massive Army exercise at Yuma Proving Ground, Arizona, that wrapped up at the end of September. During the so-called campaign of learning, the Army put its most cutting-edge technology to the test. It connected sensors from multiple domains to various fires capabilities, fused data and cut down the sensor-to-shooter timeline from 20 minutes to 20 seconds.

The Army clearly had big plans for Project Convergence, though none of them involved F-35s.

But location can be everything. Over the course of the exercises, the Marine Corps offered the Army an F-35 to borrow.

“Because we’re in Yuma, right across the highway is the Marine Corps air base with many, many F-35s,” explained Brig. Gen. Ross Coffman, who oversaw Project Convergence. “Due to the incredible relationships that were developed, the Marines provided F-35 time.”

“Why I was a Yuma fan and pushed for it is the opportunities that exist,” Army Secretary Ryan McCarthy said, referencing the use of the F-35B during Project Convergence. “And they worked it out over a handshake. Once that F-35 is airborne, it’s over the target. It’s right across the street.”

Nelson’s sensor-to-shooter team adapted to the opportunity. That team was at the heart of what Project Convergence was all about — connecting any sensor in any domain to the best possible shooter.

“And at the time the sensor-to-shooter team was up and operating, we had the emitters on and we were working back and forth. You know, every time we just felt that we were running the test,” Nelson said. “When the F-35B came on, there was a discussion of how could we work together in real time in the middle of that exercise and kind of put what we were doing down and do some direct support and targeting with that airframe.”

The Kestrel Eye is a small, low-cost, visible-imagery satellite prototype designed to provide near-real-time images to the tactical-level ground Soldier. Kestrel Eye was launched to the International Space Station (ISS) as a payload aboard the SpaceX Falcon 9 from Kennedy Space Center in Florida on Aug. 14, 2017 (Photo courtesy of SMDTC).

During Project Convergence, the Army demonstrated it could use targeting data from an F-35′s sensors to deliver ground-based fires. The service also used on-orbit sensors and artificial intelligence capabilities to synthesize targeting data, then provide it to the F-35.

Sensor fusion — the ability to take data from the F-35′s sensors and radar and combine it with information from other F-35s — is considered one of the hallmarks of fifth-generation fighters, and a strength of the Lockheed Martin-made Joint Strike Fighter in particular. However, the U.S. military has only begun to experiment with using the F-35 to sync data among multiple platforms owned and operated by different services.

The Army brought its sensor fusion capabilities to bear. On-orbit sensors collected images of the simulated battlefield before sending them to a TITAN ground station surrogate located in Washington state. From there, the images were run through an artificial intelligence system called Prometheus, which scanned and fused those images to detect threats and create targeting data. That targeting data was then sent to Yuma Proving Ground over tactical satellite communications. Then the data was sent to the F-35B over the Link 16 tactical data link. The threats could then be populated on the jet’s onboard weapons systems, allowing the pilot to respond to the new threat.

In short, operators were able to use tactical networks to give a Marine Corps F-35B pilot targeting data created from commercial satellite images using Army-owned AI.

“We’re not aware that’s even been done before,” Nelson said. “We’re excited as can be.”

Nelson said the exercise took place a few times in the brief period the service had access to the Marine Corps’ F-35B.

In that example, the F-35 was used as the shooter in the critical sensor-to-shooter chain. But the Army was also able to use the jet as a sensor, passing along targeting data to another shooter.

Fusing the data generated by the jet’s onboard electronic sensor, the F-35B identified a potential threat and passed that information through Link 16. From there, Army operators could use the FIRESTORM system to find the best possible shooter to fire at the target. (FIRESTORM is the FIRES Synchronization to Optimize Responses in Multi-domain Operations. It’s an AI capability being built for the Army that recommends the best available shooter to respond to a given threat.)

In this scenario, the Army used an Extended Range Cannon Artillery platform to shoot at the beyond-line-of-sight threat picked up by the F-35.

“They played around a lot with data passing back-and-forth between, again, a joint partner — in this case, the Marine Corps and an F-35B — to ground,” Nelson said. “So really when you think space to an aviation platform, aviation platform to ground platform, and our ability to pass targeting data back-and-forth between those different communities, it was just wonderful.

“It just goes to show … what happens when you put very capable and smart engineers in the field along with operators who are technically capable and understand the weapon system, and you’re able to really crack that open and work on those problems together and achieve, to some extent, entirely new outcomes that you hadn’t planned to at the beginning.”

The Marine Corps’ participation has far reaching implications as the Army seeks to involve the joint force for the next iteration of Project Convergence in 2021.

“The excitement for me is that you can bring in a massive amount of other assets from the other services and continue to work through just how we would be able to package information to then prosecute targets with the best capability,” McCarthy said.

The Army’s use of an F-35B is just the latest development in the Defense Department’s efforts to connect the advanced fighter jet with other platforms.

While the Army experiments with using Link 16 to share data between its own platforms and the F-35, the Air Force is testing the Advanced Battle Management System to assess technologies that may enable the F-35 and F-22 to send data across their unique, stealthy data links.

Although information cannot currently be shared across the F-35′s Multifunction Advanced Data Link and the F-22′s Intra-Flight Data Link, the Air Force in December successfully demonstrated a radio interpreter that would allow some data to be passed between the aircraft. The service plans to conduct an airborne test of the interpreter sometime this year.

Google’s antitrust battles: What you need to know