How Long Is This Going to Take? Americans Settle In to Wait 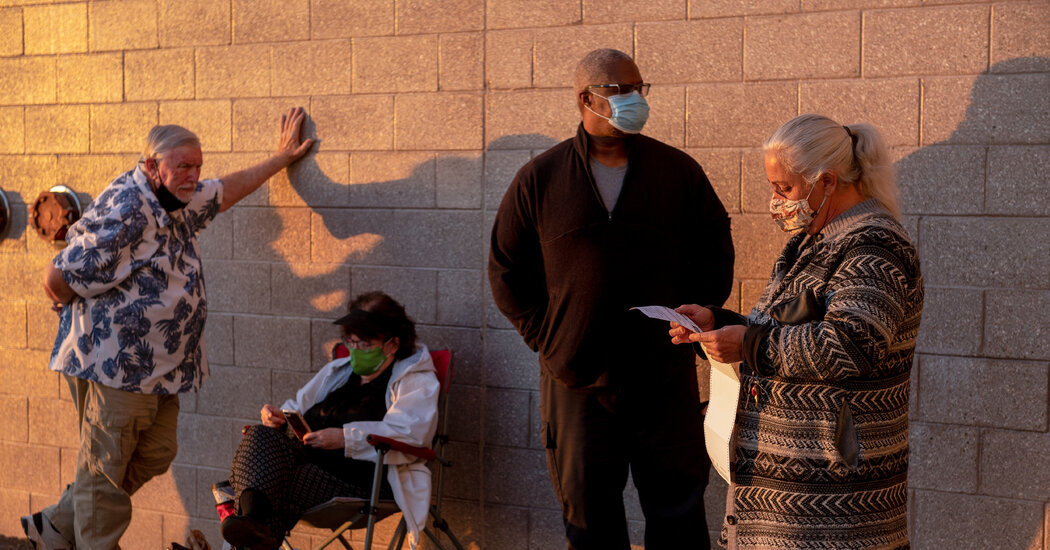 “The whole thing is just a gigantic nightmare,” said Robin Helmericks, a scientist who stood in line to vote early with her 19-year-old daughter in Charleston, S.C., on Monday.

Or, as Ian Dunt, a British political journalist, said on Twitter on Monday: “There’s not enough booze in all the world for sitting through the American election results tomorrow night.”

If the election generates that sort of response in someone 3,000 miles away, how are actual Americans, marinating in a sea of collective angst, meant to get through the day? Even more than that: If there’s no result by Tuesday night, which is likely to be the case, how will we hang on until there is?

“Patience,” exhorted the mayor of Philadelphia, Jim Kenney, in an open letter urging the residents of his city to remain calm through Tuesday and beyond.

“We expect long lines at the polls,” he went on, and also delays because of social distancing related to the pandemic. “After the polls close, and in the ensuing days, we will continue to need your patience. Never in the history of this city have so many people voted by mail. By law, staffers are not allowed to start opening and counting these ballots until Election Day itself.”

Mr. Kenney noted that the results in Pennsylvania — and, by extension, the rest of the country — might not be known for a while. That’s the message election officials everywhere have been trying to emphasize, as they cope with the pandemic reality of a record number of mail-in ballots.

“This has been the slow-moving election from hell with all the early voting,” Drew McKissick, the chairman of South Carolina’s Republican Party, said on Monday, eagerly anticipating its end. “It’s been draining.”

The overriding prediction going into Election Day 2020 indeed take patience, the sort that feels in short supply right now. (How long is a piece of string? That is how long the election seems to have taken already.)

Unfortunately, said Kate Sweeny, a professor of psychology at the University of California, Riverside, studies show that anticipatory dread only increases as waiting drags on.

“Quite a lot of research suggests that the worst is yet to come as far as anxiety,” said Professor Sweeny, who specializes in the psychology of waiting.

Part of the problem is the natural inclination to brace for the worst, in order to fortify yourself against potential disappointment, she said. “That tendency ramps up and moves more to the front of the mind as you get closer and closer to an outcome. Even people who are general optimists show a decline in optimism as the moment of truth draws nearer.”

Of course, part of the difficulty this time around is that no one knows when this nirvanic (or hellish, depending) “moment of truth” might actually arrive. Having to wait longer also means fretting longer about possible scenarios and obsessing even more about the darkest contingencies.

But people should avoid indulging in “speculative mode” and instead focus on what is in front of them, said Michael Miller, director and co-founder of the New York Meditation Center.

“This whole season has been focused on speculating about what is going to happen,” he said. “But getting caught up in the moment-by-moment question of what results are coming in — that has never been good practice.”

While it would be great to have some clarity, he said, it is unclear when that will come. “It’s about how can you make a plan to engage in self-care that would keep you in the present moment,” he said.

Think small, he counseled. Clean your oven, rake some leaves, go for a walk, take off your shoes, feel the carpet on your feet. Breathe.

Nobody would advise anyone to spend Election Day stationed next to their liquor cabinets and enslaved to their social media feeds, though good luck with that. Either people are focusing disproportionately on alarming snippets of information that automatically make them feel bad — a swing against their candidate in a new poll, say, or a video of some helpless voters apparently being intimidated at a polling place — or they’re scrolling obsessively in search of some chimeric nugget of definitively good news to quiet their unease.

“What is the German word for ‘feeling physically nauseous from anxiety at the news but also morbidly unable to look away and stop scrolling?” the novelist Celeste Ng wrote on Twitter.

Mac Stipanovich, a Republican strategist and lobbyist in Florida who was intimately involved in the slow-burn nightmare of the 2000 election (his candidate won, but still) said that in many ways, it’s easier to be a campaign operative or a volunteer during stressful elections. Even if the tide is going against you, you’re too busy doing your job to indulge in your distress.

“It’s like having a broken foot and then being shot in the other leg — you don’t notice the foot so much,” he said.

Things are harder for regular voters whose civic engagement consists, basically, of one moment of voting followed by a million moments of catastrophizing.

“I try to distract myself,” Mr. Stipanovich said on Monday. “Yesterday I walked for seven miles. Today I’m mowing and edging. I might go for a drive.”

“I am bad about social media,” he went on, getting a little more heated up as he thought about it. “It’s gotten worse as Election Day has neared.” So to stave off “involuntary commitment in a mental institution,” he said, he has made it a policy not to engage with the people he usually argues with on Twitter and Facebook. (Note to public: Nobody is going to win those arguments, especially today.)

“I will scan Twitter looking for news stories in which the vice chairman of the Republican Party of Florida pops up and says something dumb” Mr. Stipanovich said. “Whereas I would have engaged in the past, now I don’t, because it’s pointless.”

Professor Sweeny said that the trick was not to cancel all plans — which would leave you at the mercy of your phones and your crazy thoughts — but to find an activity absorbing enough to get you out of your own head.

“Just having an hour pass without it being pure torture would be a victory,” she said. “You need an activity that challenges you the right amount, that pushes you, but not to the point of frustration.”

Her idea of such an activity might not be to everyone’s taste, particularly those whose anxiety is only exacerbated by the onslaught of incremental information that will keep pouring in until the end of this dreadful election.

“What gets me there most readily,” Professor Sweeny said, “is data analysis.”