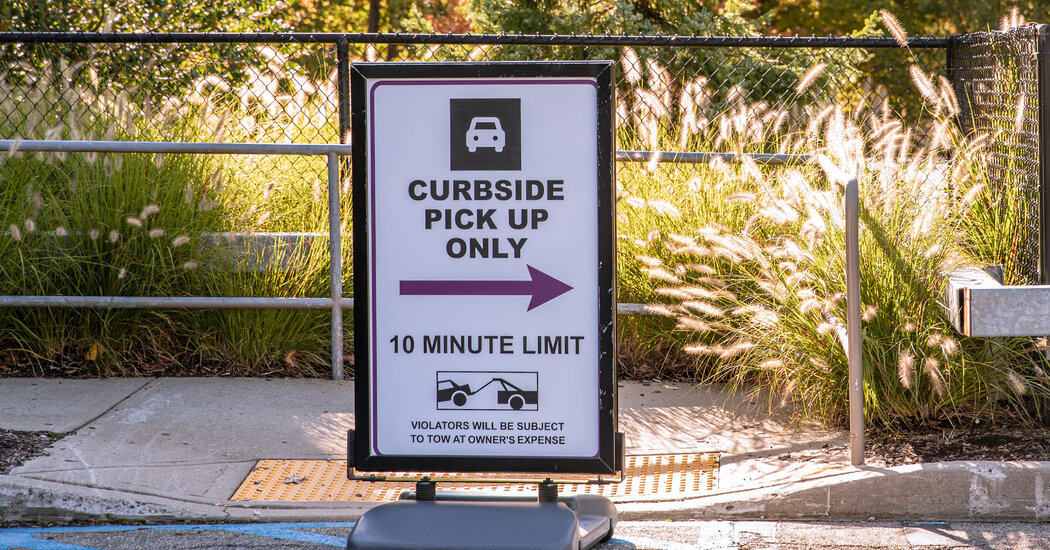 Black Friday has long been the biggest shopping day of the year, with doorbuster deals inspiring some die-hard shoppers to camp out all night in front of big-box stores.

But as coronavirus cases climb across the country and public health officials beg people to avoid crowds, will stores still try to lure customers inside? And if they do, will customers take the bait and show up?

“This year is going to be a Black Friday unlike any other,” said Kelly O’Keefe, managing partner at the Brand Federation, a consulting firm. “We’re not going to have crowds knocking down Walmart’s door this year. There will be fewer people in stores and there will be much better management of those people.”

Here’s what some of the biggest retailers are doing to keep customers safe on Black Friday this year:

Best Buy said it was selling this year’s new gaming consoles online only, to avoid lines outside stores.

The electronics chain said it would limit the number of customers inside stores to comply with social-distancing guidelines as recommended by the Centers for Disease Control and Prevention. Best Buy also said it would consider limiting store hours, reducing occupancy and shifting to curbside-only pickup service “on a case-by-case basis to help local communities contain outbreaks.”

All pickup orders will now happen curbside, and pickup will be available before and after in-store hours.

The stores will require customers and employees to wear face coverings and will supply face coverings to customers who do not have one. Best Buy will provide sanitizer wipes near high-touch displays to give the customers the option of wiping down surfaces before engaging with them.

Walmart put on three separate sales in November, both online and in store.

It is offering customers the option to pick up their online Black Friday orders through Walmart’s contactless curbside pickup service.

On Black Friday itself, Walmart stores will open at 5 a.m., and customers will be asked to form a single, straight line to enter the stores. Employees will hand out sanitized shopping carts and will remind customers to wear a mask when entering the store. Walmart will limit the number of customers in the store to 20 percent capacity and will direct customers to shop down the right-hand side of aisles.

Target has spread its sale offerings throughout all of November, offering promotions of different product categories each week.

To minimize lines, Target has added mobile checkout devices to allow store employees to help shoppers check out anywhere in the store. The company also allows guests to check out by themselves using Target’s mobile app.

Additionally, the company has added thousands of items eligible for same-day pickup.

Target says it will monitor the number of shoppers to ensure people have enough space to shop safely and will allow customers to reserve a spot in line outside their local store.

The home improvement retailer has made Black Friday prices available throughout the holiday season, from Nov. 6 through December, both in store and online, in an effort to reduce crowds. Home Depot said it had reduced the number of items displayed in certain areas in stores to create more space for social distancing.

Adidas tapped JPMorgan Chase to help it weigh a sale of Reebok that could take place as soon as early next year, sources told the DealBook newsletter.

Rumors have been swirling that the company may sell the brand, which has struggled to keep pace with rivals like Nike. The Financial Times has reported that Permira and Triton are among Reebok’s interested suitors. Adidas did not respond to a request for comment. JPMorgan declined to comment.

Reebok could fetch around $1 billion in a deal, said the sources, who spoke on condition of anonymity because the information was confidential. Though that valuation is subject to change, it would be a far cry from the roughly $4 billion that Adidas paid for it in 2005. Reebok’s sales were down 7 percent in the most recent quarter, excluding currency effects, compared with a 3 percent drop for Adidas as a whole.

Buyers may be wary of the pitfalls involved in the 2015 sale of Adidas’s Rockport unit. Three years after Adidas sold the shoe brand to Berkshire Partners, it filed for bankruptcy, blaming its former parent for a sale process that “took meaningfully longer and was significantly more expensive than planned.”

Broadly speaking, the athletic apparel industry is doing well. Consumers are embracing both comfort and fitness during the pandemic, bolstering sales at companies like Nike and Lululemon. But Reebok’s quirky brand has had a hard time recapturing its 1980s heyday, even with the muscle of Adidas behind it. And Reebok’s gear is focused largely on indoor sports, like CrossFit, which will take longer to recover in the pandemic.

In the stock market, dividend payouts had appeared to be among the prime casualties of the recession caused by the pandemic. There were predictions by Goldman Sachs, among others, that dividends would fall by more than 20 percent, cutting payouts to investors by hundreds of millions of dollars.

It hasn’t turned out that way, writes The New York Times’s Jeff Sommer.

Dividends are down, yes, but with little more than a month to go in 2020, the total decline for dividends in the S&P 500 is likely to be less than 1 percent, according to the estimate of Howard Silverblatt, senior index analyst for S&P Dow Jones Indices.

A drop of that size would be inconsequential, given the severity of the stock market downturn earlier in the year and the rate that the economy shrank, 31.4 percent, in the second quarter of the year.

“Considering where we were, this hasn’t been a bad year for dividends,” Mr. Silverblatt. “It has been a great year.”

A total of 42 companies in the S&P 500, heavily concentrated among hotels, airlines and retailers, suspended dividend payments from March through July, according to Mr. Silverblatt’s data. But the business outlook for many companies has since turned around, and their dividend actions reflect it:

As things stand, Mr. Silverblatt says, it’s reasonable to project that corporate America will prosper and that dividend payments will continue to recover, perhaps even hitting a record next year, exceeding their 2019 peak.

While President Trump is still contesting the election results, corporate America — along with much of the rest of the world — is moving on. In recent days, companies including Boeing, CVS Health and McDonald’s have said they recognized President-elect Joseph R. Biden Jr. and believe the election was free and fair.

On Friday and Saturday, the chorus of chief executives calling for an orderly transition continued to grow, David Gelles reported.

“The election is over and we expect a smooth transition,” said Ajay Banga, the chief executive of Mastercard. “That’s the hallmark of American democracy.”

Many companies were already offering to work with the Biden administration on efforts to combat the coronavirus pandemic and kick-start the economy.

“The country needs political stability,” said Michael Dell, the chief executive of Dell Technologies. “We are eager to progress forward and work with the new administration and Congress on pandemic response and recovery and other critical priorities including education, infrastructure and the environment.”

Julie Sweet, the chief executive of Accenture, congratulated Mr. Biden and Vice President-elect Kamala Harris on Nov. 8, the day after most major news media organizations called the election. On Friday, Ms. Sweet called for the Trump administration to cooperate with the transition.

“We have work to do as a country — defeating the pandemic, ending the digital divide, rebuilding the economy and so much more,” she said. “A peaceful, lawful transition must be permitted to move forward.”

Among the companies effectively calling on the Trump administration to concede defeat were many major government contractors, including Cisco.

“We had a free and fair election, and it was encouraging to see the record number of Americans who exercised their right to vote,” said Chuck Robbins, the chief executive of Cisco. “Now we must move forward with the transition process so we can take the steps needed to recover from the pandemic.”

Carlos Gutierrez, the former Commerce secretary, who is now the chairman of EmPath, a private company, and was previously the chief executive of Kellogg, said that beyond disrupting the handoff to the Biden administration, Mr. Trump’s refusal to concede was eroding America’s standing in the world.

“The absence of a normal transition, and a president determined to make some kind of a mark in his last 60 days, has created uncertainty and a worldwide sense of confusion,” Mr. Gutierrez said.

“Wonder Woman 1984” is coming this Christmas Day. If that isn’t enough big news, this big-budget film will be released in theaters and on the streaming service HBO Max.

Thank, or blame, the coronavirus pandemic.

With many theaters shut because of the virus, and those that are open struggling, many studios have either pushed the release dates of major films into next year or created a hybrid model in which operating theaters can show new releases while they are also made available through streaming or on-demand services.

“We’re not in Kansas anymore,” said Jason Kilar, chief executive of WarnerMedia, in a statement invoking the Hollywood classic film “The Wizard of Oz.”

AMC, the largest theater operator in the world, objected and announced it would no longer book any Universal films. But by July, the two companies signed a multiyear deal in which Universal movies would play in AMC theaters for a minimum of 17 days before becoming available in homes through premium video-on-demand. That shortened window could mean that studios will spend less on marketing.