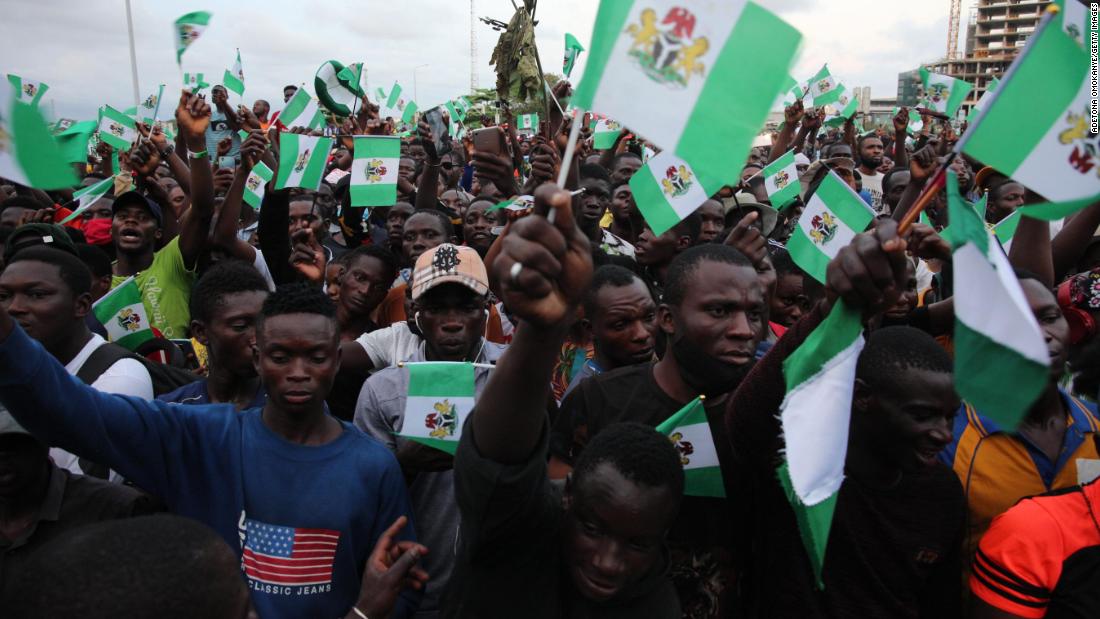 President Muhammadu Buhari tweeted on Sunday that the panel had his “full support”, but protesters say his administration has for years ignored their calls for reform.
Demonstrators took part in daily protests across Nigeria for nearly two weeks over widespread claims of kidnapping, harassment and extortion by a police unit known as the Special Anti-Robbery Squad (SARS).
The eight-person Judicial Panel of Restitution at the Lagos Court of Arbitration will look at the claims against SARS, which was disbanded on October 11 in response to the protests, and also investigate last Tuesday’s deadly incident at Lekki Toll Gate.

Tuesday saw only two complainants give testimony after the panel appeared over two hours late. Both cases related to historical SARS brutality and not recent killings.

The first petitioner, Okoye Agu, said that in 2012 he spent 47 days in SARS detention where officials tortured him and extracted two teeth. He said his wife and mother, who came to try to help him, were also beaten.

Agu also said his property and car were sold by SARS officials, and even though a court awarded him N10m ($26,000) in 2016, he hasn’t been compensated at all.

The second petitioner spoke briefly before his case was adjourned until next week so the police commissioner could be present.

Amnesty International told CNN that at least 12 demonstrators had been shot dead at Lekki Toll Gate and another site last Tuesday by Army soldiers, who then took the bodies away. The Nigerian army claimed on Twitter that these reports were “fake news.”

The human rights group said at least 56 people have died across the country since the protests began, with about 38 killed last Tuesday alone.

Lagos Governor Babajide Sanwo-Olu told CNN’s Becky Anderson on Monday that only two people were killed by the military. CCTV footage from last Tuesday’s incident will be part of the tribunal’s investigation but is not yet known if it will be made public.

Despite condemnation of the killings from the United States, United Nations and others, Sanwo-Olu insisted there was no international pressure on the government or the president to make reforms.

In addition to Tuesday’s session, the tribunal will also hold hearings on Friday and Saturday this week and the public have been invited to submit claims to the court.

It’s the only action government have taken to address the Lekki Toll Gate violence and is seen as a litmus test for the independence of the judiciary. There are two young protesters on the panel who will represent the youth voice.

The anti-SARS marches have recently morphed into protests campaigning for police reform and an end to bad governance in the oil-rich country.

The physical protests have ended but a coalition of protest groups vows to continue online. Many of the protesters said they have received multiple threats and there has been an attempt to blame them for the chaos, looting, and burning that followed the shootings last Tuesday.

“The ones that died are the real heroes,” said DJ Switch, who streamed a live video on Instagram at Lekki Toll Gate when the shooting started. “The giant is asleep. The custodians of the country, the leaders of the country, they’re tiptoeing; they don’t want to wake the giant up, the giants are the people.

Santo Stefano: This idyllic Italian village will pay you to move there

Internet blimps are coming to Zanzibar. But can a UK company succeed where Google…