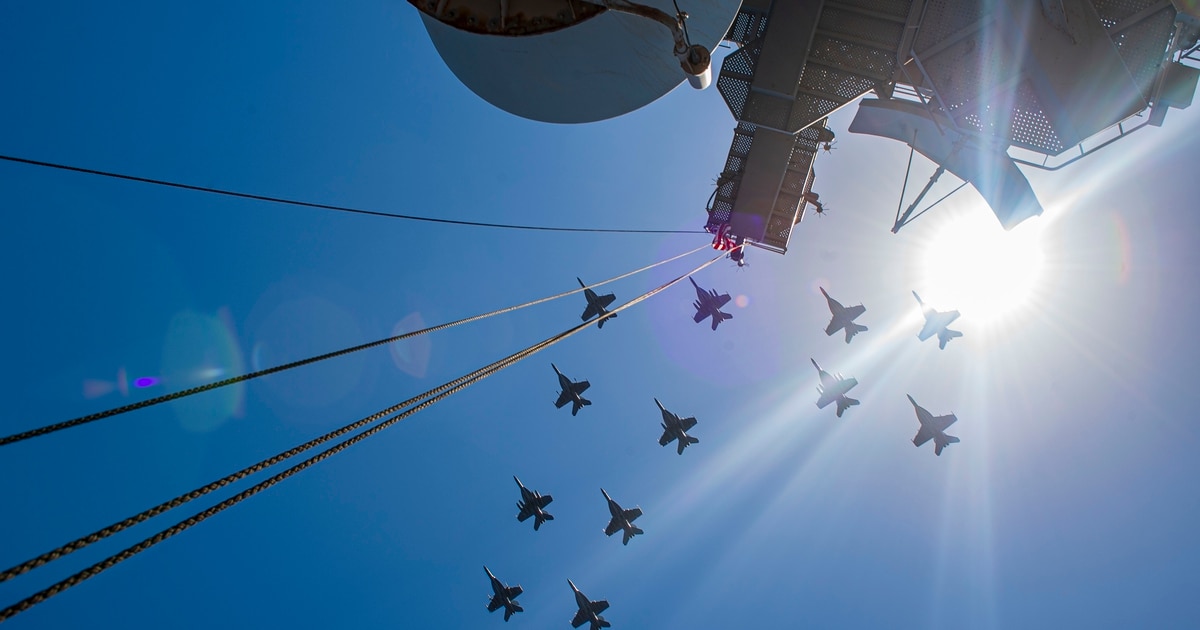 WASHINGTON – The House Armed Services Committee has reservations about the U.S. Navy’s plans to transition from the F/A-18E-F Super Hornet into the Next Generation Air Dominance (NGAD) future fighter jet, though it’s unclear yet if the committee will take action to force a change in plans.

The Navy envisions fielding air wings with a mix of fourth-generation Super Hornets and fifth-generation F-35C Joint Strike Fighter aircraft from now, with the soon-to-deploy Carl Vinson Carrier Strike Group bringing the F-35C on its first deployment, into the 2030s. Once the Super Hornets begin to retire, though, they’ll be replaced by NGAD – for which a program office has been stood up, but little information has been released about what kind of plane the Navy wants and how much progress it has made so far in designing the jet or developing any components.

To tide the Navy over until NGAD hits the fleet, the service also wants to modernize and extend the life of some of its Super Hornets through a service life modification program, which takes place at Boeing’s fighter production line in St. Louis, Mo.

The Navy is confident enough in this plan that it asked in the fiscal 2022 budget to stop Super Hornet production altogether, sure that it can extend its current fleet long enough and field NGAD quick enough that it won’t suffer a significant fighter shortfall during the transition.

“If you look at the current execution of their SLM line, they can’t meet their cost or schedule that they’re planning to: they’re trying to put through Hornets within a year timeframe at a cost of about $7 to $8 million; right now the timeframe is nearly double that, as well as the cost. So basically, the Navy is not executing their SLM program as they’re currently planning for in the future,” a committee aide told reporters in a July 28 briefing ahead of the tactical air and land forces subcommittee’s markup on July 29.

Additionally, the aide said, “we’re aware that the Navy wants to focus more resources and funding on NGAD. But if you recall eight or 10 years ago, they tried to do the same thing when F-35C was in development: they truncated the Super Hornet line to focus more on F-35C, and they found out, as the F-35C kind of struggled, the Navy had to go back to procuring more Super Hornets.”

As a result, this time around, “we’re cautious about the Navy’s approach to truncate a hot production line while they focus on a new development program. And given the technology they’re trying to integrate into NGAD, it’s probably not going to be any easier than what F-35C was. So just taking lessons learned from the past, we’re just keeping an eye on how the Navy is going to move forward with trying to manage and mitigate their strike fighter shortfall.”

In this Wednesday, April 25, 2018, photo, workers perform hydraulics testing on a new F/A-18 at Boeing’s fighter aircraft production line in St. Louis. The Pentagon has the biggest budget in history this year, with $700 billion to spend on defense, including new fighter aircraft. (Ted Shaffrey/AP)

Navy leaders said in a 2020 hearing with the HASC tactical air and land forces subcommittee that they needed to stop Super Hornet production so Boeing could use the production line for the modification program, which converts older Super Hornets to a more capable Block III variant and adds thousands of flight hours to the jets’ expected service life. Prior to this decision to end the production line, which was formally announced in the Navy’s FY21 funding request, the Navy had planned to buy 36 more jets in FY22 through FY24.

The service has also argued it needs to stop Super Hornet production to reroute funding to NGAD.

The committee aide said in the briefing that any decisions about forcing the Navy to continue buying Super Hornets to ward off a significant shortfall next decade would be made in the full committee section of the bill and the funding tables, which will be released later this summer ahead of a planned Sept. 1 full committee markup.

“We are kind of scratching our heads on how the Navy moved up their analysis in terms of eliminating the shortfall by about five years. One, they didn’t reinstate the 36 aircraft, Super Hornets, they were going to procure in 22, 23, 24. They also took out about 104 aircraft out of their service life modification program. Also, their NGAD program, the Next [Generation] Air Dominance, is pretty much on the same timeline that it was last year,” the aide said.

With the Pentagon not releasing information on future year’s spending plans – budget requests often include a five-year Future Years Defense Plan, but in this first request by the Biden administration, the Pentagon only released FY22 spending plans – the aide said “everything they do is out in the FYDP, and with us not being able to see their FYDP numbers, we’re kind of skeptical to understand how the Navy manipulated the data and their analysis to bring the shortfall to resolve five years earlier in 2025.”