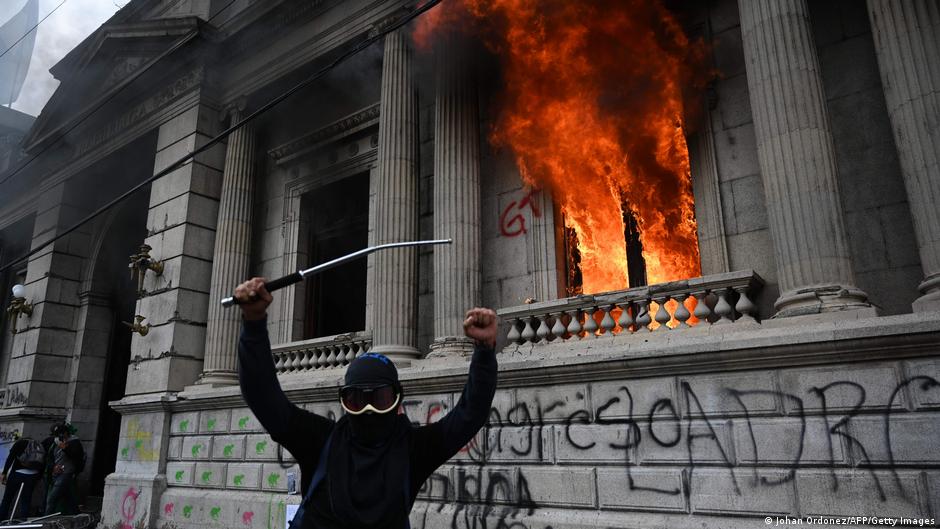 Hundreds of Guatemalan demonstrators stormed into the country’s Congress in Guatemala City on Saturday, setting fire to parts of the legislative building. The rally came amidst growing protests against the government under President Alejandro Giammattei for approving budget cuts to education and health spending.

Around 7,000 people gathered outside the National Palace following the approval of the $13 billion (€11 billion) budget for 2021. It’s the country’s highest-ever spending plan and earmarks most funds for infrastructure projects linked to big businesses in a country with widespread poverty. Protesters accused the government of passing the budget in secret and demanded Giammattei’s resignation for endorsing the amount.

Social media videos showed smoke emanating from a window in the country’s legislature. There were also reports of security personnel firing tear gas at protesters. Numerous injuries have been reported.

“Anyone who is proven to have participated in the criminal acts will be punished with the full force of the law,” Giammattei wrote on Twitter. He added that he defended people’s right to protest, “but neither can we allow people to vandalize public or private property.”

Vice President Guillermo Castillo has offered to resign and called on the president to veto the budget.

After clashes erupted during protests on Friday, a larger march was called on Saturday.

Dissent has been growing in the Central American country as many feel that the government passed far-reaching budget decisions at a time when many were distracted by the devastation caused by back-to-back hurricanes and the coronavirus pandemic.

Duty or Party? For Republicans, a Test of Whether to Enable Trump