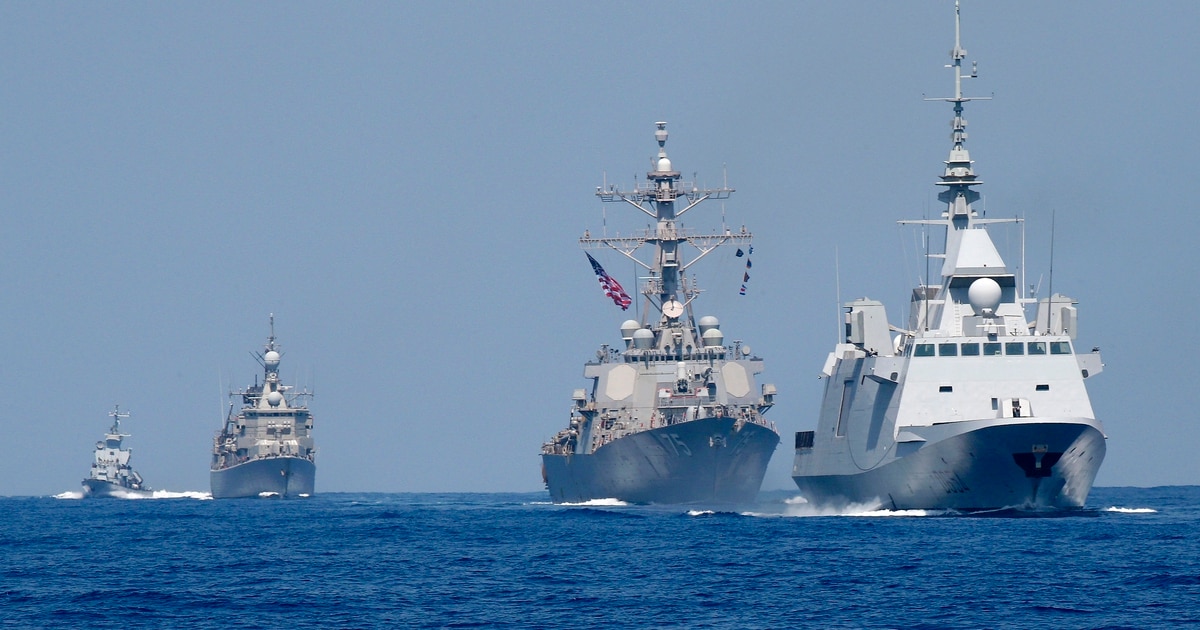 PARIS – Fresh off a pair of frigate and submarine cruise missile tests, the French navy is readying for high-intensity conflict by adapting its exercises and training programs, according to Vice Adm. Xavier Baudouard, commander of the surface fleet.

In a wide-ranging conversation with Defense News, Baudouard stressed that the French navy is a combat force and as such not only trains for today’s warfare but is also preparing for tomorrow’s wars.

“So what we’re trying to do is to permanently improve the equation between our training and the reality of the theaters where we might be deployed,” he said. Baudouard explained that naval exercises were constantly adapted to evolving threat scenarios. “When I left my last ship command in summer 2009 to spend 11 years at the naval staff headquarters in Paris, I left a mechanical navy with ships dating back to the 1970s and 80s. And now that I have returned to the fleet it’s become a digital navy with capacities that are way superior to those we had in the past and which are increasingly adapted to the risk of high-intensity conflict,” the admiral remarked.

He said the multimission frigates [FREMM] were “an extraordinary qualitative jump” over their predecessors, notably where anti-submarine warfare is concerned but also thanks to their cruise missiles. The latter give the navy “a capacity improved tenfold to intervene on land from the sea,” he remarked. He added that “our sailors must be so familiar with the material at their disposal that they could use them blindfolded!”

Baudouard’s principal role is ensure that the surface fleet vessels are prepared and available for both personnel and material. To do so he is concentrating on four major areas. Firstly that navy personnel should train in a degraded environment “because in a high-intensity conflict the environment will not be the same as the one we’re familiar with in peace-time.” Secondly, to ensure that the modern equipment is properly used “in order to have the tactical and technical superiority” over the enemy.

Thirdly, elaborating fast and innovative tactics with this new equipment “given that one of the tactics of warfare is to know how to surprise your enemy.” And lastly, planning, undertaking and debriefing exercises in different combat domains. These exercises are increasingly accentuating high-intensity conflict “against an enemy which is better prepared than the one we’ve had opposite us over the past decades,” he added.

For example, firing drills are made more difficult by jamming a number of sensors and navigation systems, for example. “Every time we do a difficult firing we learn a bit more about the material we have at our disposal,” Baudouard said.

“What I want from my troops is that they be visionary and creative in order to adapt to the new types of conflict so that they’ll be ready when the moment comes. We work at it every day,” he said.

France has enough ships for its missions, the admiral said, adding that the SLAM/F mine countermeasures program “is one of the most innovative programs the armed forces ministry has seen over the past few years.”

He explained that the idea of using robots deployed from mother-ships was so that the latter could forego the “extremely stringent anti-acoustic, anti-magnetic and anti-electric standards that mine countermeasure ships normally have to have. By keeping the ships out of the minefield these standards don’t have to be so stringent, so it makes it easier.”

The French navy, in addition to the usual missions of supporting the nuclear deterrence force, protecting the homeland and its overseas territories, deploying the carrier strike group and undertaking mine-hunting missions, is quasi-permanently deployed on three theaters.

For one, sailors support the “Chammal” operation in the eastern Mediterranean, the French portion of the counter-ISIS mission in Iraq and Syria. In addition, the service has been involved for decades in operations in the Gulf of Guinea. Finally, the navy is deployed in a European mission to protect shipping lanes in the Strait of Hormuz together with Belgian, Danish, Dutch, German, Greek, Italian and Portuguese sailors.

The latter two countries, together with Spain and France, work together in the EUROMARFOR Fleet, which celebrates its 25th anniversary this year and is currently under Baudouard’s command. The fleet is assembled when missions arise, including NATO exercises.