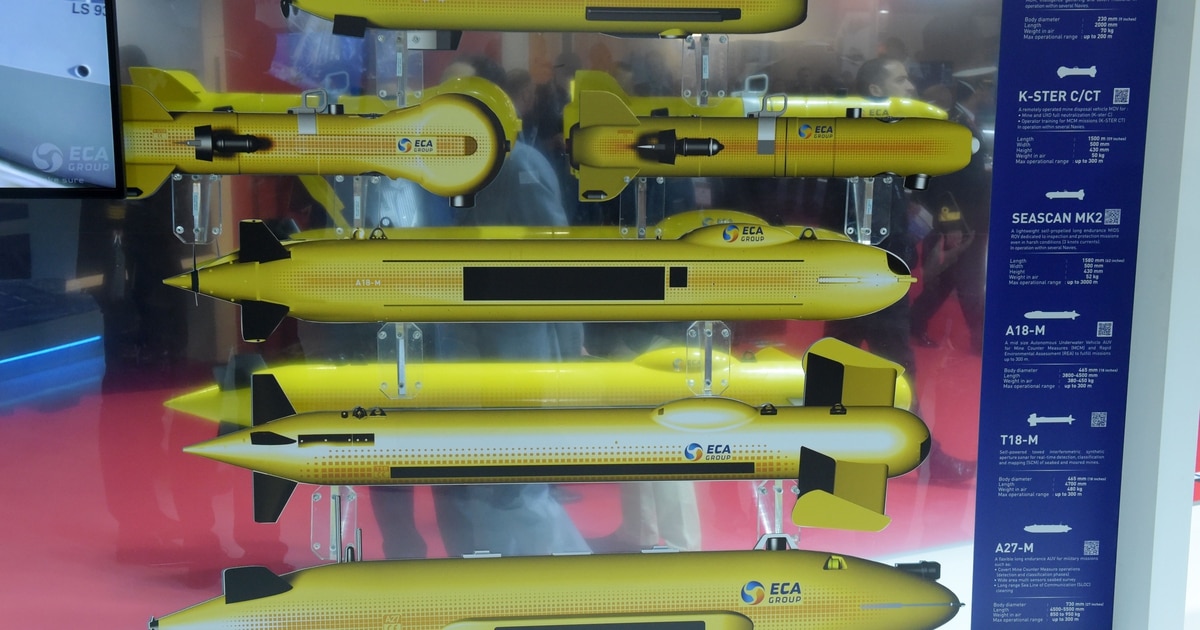 PARIS — France is to entirely overhaul its mine countermeasures systems, Armed Forces Minister Florence Parly has confirmed, replacing all current equipment ranging from the Éridan class of mine-hunting ships to sonars by 2029.

The first is aimed at replacing Navy personnel with robots for the most dangerous parts of mine-hunting operations. These unmanned systems have been developed by Thales and partners Saab, French robotics specialist ECA and British shipbuilder ASV in the framework of the Franco-British Maritime Mine Counter Measures (MMCM) program managed by OCCAR, the European joint organization for arms procurements.

France will procure four of these systems to be delivered by 2024 and four others at a later date.

The French and British navies will, at the end of this year, each start a two-year evaluation of prototypes.

The ASV can be pre-programed or remotely-controlled and can operate in sea states up to 4. It is equipped with a Towed Synthetic Aperture Multi-aspects sonar for a first DCL (detect, classify, locate) operation to detect anything on the sea-bed or in the water, classify it and pinpoint its location. If a mine-like object (MILO) is found, then the ECA vehicles equipped with Thales’ Synthetic Aperture and Mine Detection Imagery Sonar (SAMDIS) are put into operation. SAMDIS takes three images simultaneously, each from a different angle, in a swathe 300m wide.

Antoine Caput, Thales’s MMCM program director, explains: “Imagine that you’re flying over a desert looking straight down at the sand. You see a dark line but can’t tell what it is. So now look at the same dark line but from a different angle so that it’s throwing a long shadow. And immediately you see that it’s actually a caravan of dromedaries!” He adds that “we are beginning to integrate artificial intelligence to it so that it automatically measures the shadows without the operator needing to click on each individual MILO on the screen to get the measurements.”

If the object appears to be a mine, then the ASV launches the MuMNS from a cradle at the rear of the vessel. A fiber-optic tether ensures the latter stays attached to the former and gets power and can communicate even at its floor depth of 985 feet. The MuMNS can navigate automatically to a recorded waypoint or can be piloted remotely. Using the onboard sonar and cameras the operator can confirm the object’s identity. If it is a mine, the operator navigates the MuMNS close up, extends its telescopic arm holding a non-magnetic nail gun which it uses to attach a charge onto the mine. The charge is equipped with a floater which contains a coded radio signal.

The MuMNS can lay three charges and then returns to the ASV. Once out of harms way each charge is remotely detonated using the coded signal unique to each floater.

The second segment involves replacing the 10 Éridan-class mine countermeasure vessels built in the 1980s in the framework of the Tripartite-class joint project between the Belgian, Dutch and French navies signed in 1974. Belgium and France ordered 10 each of these 678 ton, 51.5m long ships crewed by 45 sailors and six bomb disposal divers. Today Belgium only has two vessels left, three having been sold to France, one to Bulgaria and the other dismantled, whilst out of the 15 bought by the Netherlands, five have been sold to Latvia. All these ships are part of NATO’s Mine Counter Measures Force North. But France intends to retire its entire fleet by 2029 to be replaced by between four to six modern ships. France’s Naval Group won the contract in 2019 to supply six mine-hunters (the vessels will be built by French company Kership) each for the Belgian and Dutch navies. The navies will share 100 mine-hunting drone systems developed by ECA.

The third segment concerns the replacement of France’s four 41.6-meter, 540-ton bomb-disposal diver base ships, which have been in service since 1986 and 1987.

No details have been released concerning either of these two ship replacement programs except that they will be delivered “in around 2030”, according to a press statement.

The fourth segment concerns a mine warfare data analysis system named SEDGM (système d’exploitation des données de guerre des mines). “This treatment of a massive amount of data will need to use artificial intelligence,” Parly said in a speech to Thales employees in Brest on May 29.

Confused About Covid Brain Fog? Doctors Have Questions, Too