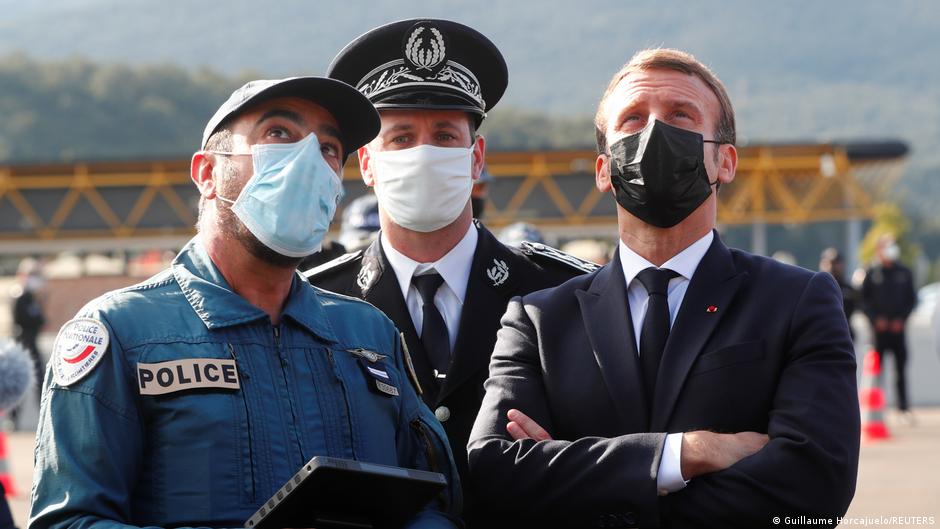 French President Emmanuel Macron called for a “deep overhaul” of the Schengen zone, Europe’s open-border area, urging the EU to set up a “real police force” and deploy it at its external borders.

His comments come after France and Austria were hit by deadly attacks from assailants born outside the bloc.

“We see very clearly that terrorist actions can actually be led by some people who use migratory flows to threaten our territory,” Macron said while visiting the town of Le Perthus near the Spanish border on Thursday.

“So we must reinforce our controls for reasons of national security,” he added.

Flanked by Interior Minister Gerald Darmanin and European Affairs Minister Clement Beaune, Macron also announced France would be doubling the number of guards at its national borders from 2,400 to 4,800 due to the escalating terror threat.

France was deeply shaken by the brutal murder of school teacher Samuel Paty last month. Paty was beheaded by an 18-year old Moscow-born Chechen refugee for showing cartoons of Prophet Muhammed during a class discussion on free speech.Two weeks later, a Tunisian man who had arrived in France via the Italian island of Lampedusa killed three people in a church in Nice.

Earlier this week, an Austrian-born ethnic Albanian, who had both Austrian and Macedonian nationalities, killed four people in Vienna. The  20-year-old, who was a convicted “Islamic State” sympathizer, previously crossed into Slovakia and attempted to buy ammunition. Slovakian authorities warned their Austrian colleagues of the attempt, but Austrian authorities did not follow up due to what their interior minister described as a “failure of communication.”

Read more: Germany is home to more than 600 terror agitators

On Thursday, Macron said France would be presenting its plans for beefing up EU border security at a summit next month. The proposals are likely to be based on a letter to citizens Macron sent last year, when he called for a common border force and a single asylum office, paired with strict obligations of border control and intelligence sharing under the authority of a single EU body.

Nikon’s New Software Turns Your DSLR Into a Webcam

Shining a light on the issue of wine fraud

Less inflammation with a traditional Tanzanian diet than with a Western diet: Study…