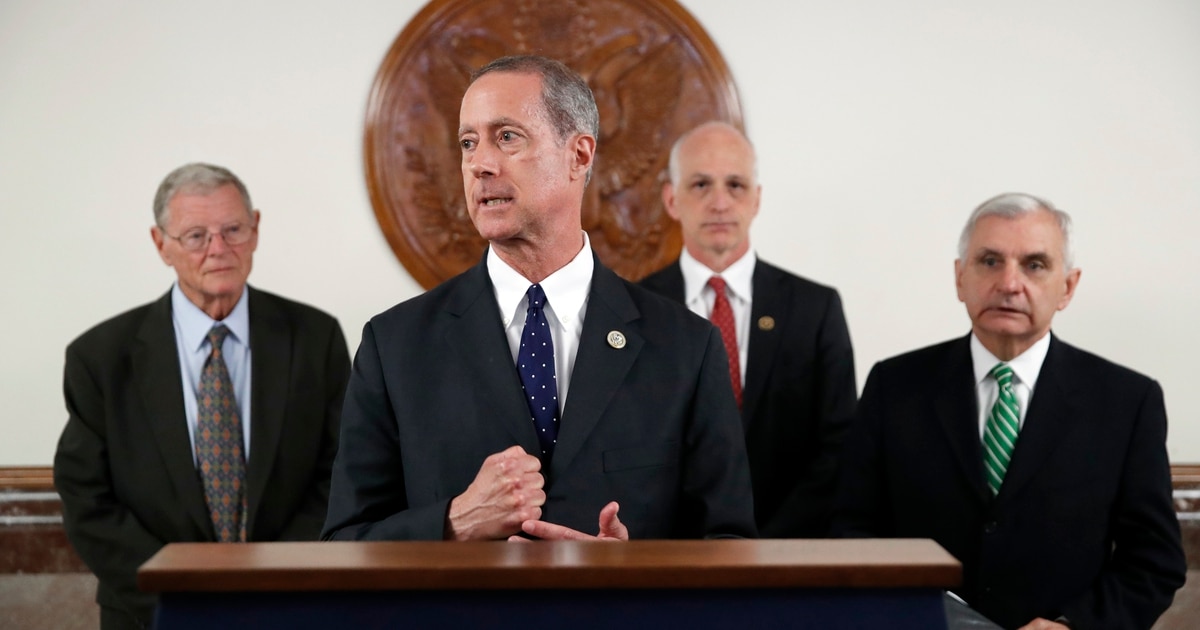 WASHINGTON ― U.S. House and Senate conferees will meet Wednesday to wrangle over the massive 2021 defense authorization bill, but they still face potentially bill-derailing fights over whether to keep plans requiring the retitling of Confederate-named bases and regarding an Afghanistan drawdown.

As lawmakers are set to hold their “pass the gavel” meeting Wednesday morning to formally kick off the bicameral talks, the two provisions are among the sticking points for getting an agreement on a final National Defense Authorization Act, which sets broad policy for the military and is expected to authorize $740.5 billion.

House Armed Services Committee ranking member Rep. Mac Thornberry, R-Texas., warned Tuesday that the bill could be upended over the Confederate-renaming language. Lawmakers have been meeting informally, and for most everything else, “there’s a good chance we will be able to resolve … in a short amount of time,” he said.

A cadre of 37 Senate Democrats have called for lead negotiators to buck President Donald Trump’s veto threat, and essentially to resist the temptation to remove the language, since President-elect Joe Biden supports removing the names and could do so when he enters office.

Yet, the mandate passed in both chambers, and the prospect of bipartisan compromise has grown cloudy amid the race for a pair of Senate seats in Georgia early next year and Trump’s denial the Biden won the presidential election. Democrats are privately Trump’s veto of the popular bill to protect Confederate names and symbols would be a political error and one that’s potentially animating in the Georgia runoffs.

Thornberry urged a compromise for the sake of the overall bill.

“I am concerned there is at least the potential that political concerns, especially with the Georgia run-offs, are going to play a bigger role than what’s good for the men and women of the military, and all of the good in this bill,” Thornberry said, adding that there are riders unrelated to the military that lawmakers should compromise to preserve.

“To say what everybody knows: The incoming Biden administration is going to deal with the base-naming issues anyway, so really what we’re down to is whether it has to be in this bill just this way and whether it would provoke a veto,” he said.

Thornberry, who is retiring before the new Congress is seated on Jan. 2, warned against punting the NDAA into next year. The bill would likely be delayed for weeks as the new Congress is sworn in, the new Armed Services committees are formed and the presidential inauguration is held.

“I worry that people will say, ‘Oh, we can just do it later’ — flippant — ‘because it’s just too politically volatile right now’ because of all the good in the bill and nearly insurmountable obstacles to resurrecting it,” Thornberry said.

Amid news Trump is expected to withdraw a significant number of U.S. troops from Afghanistan and a smaller number in Iraq by the final days of his presidency, Thornberry was asked whether that placed new weight on a bipartisan provision in the House-passed NDAA to prohibit troop reductions below 8,000 without a series of conditions first being met.

Alluding to Biden’s less absolute stand on a troop withdrawal, Thornberry said the issue transcended the election results and pointed to the “bipartisan support and interest to make sure that we do not precipitously withdraw [or] undercut our mission, not only in Afghanistan but in other places.”

Thornberry and other lawmakers of both parties have pushed back against Trump’s efforts to withdraw troops from Afghanistan, arguing that the withdrawal ought to be based on conditions in the country and that it’s a unilateral concession in U.S. peace talks with the Taliban.

“Increased military pressure brought the Taliban to the table, and pretty much everybody agreed that further reductions would be conditions-based,” he said. “In other words: They give and we give. And I don’t know of any condition which justifies reducing further the troops that we have in Afghanistan.”

As of Tuesday morning, Thornberry said he had received no explanation of the administration’s plans, but that acting Defense Secretary Christopher Miller had reached out and would be speaking with Thornberry later that day.

Despite increased partisan infighting in recent years, the defense authorization bill has passed out of Congress for 59 consecutive years.

‘He knocked him out THREE times’: MMA fans stunned as ‘intern’ referee doesn’t stop bout despite fighter being UNCONSCIOUS (VIDEO)

From NBA highlights on Top Shot to Christie's…

‘Star Trek: Prodigy’ Will Beam to Paramount+ Before…