For the fire-ravaged ship Bonhomme Richard, the US Navy has no good options 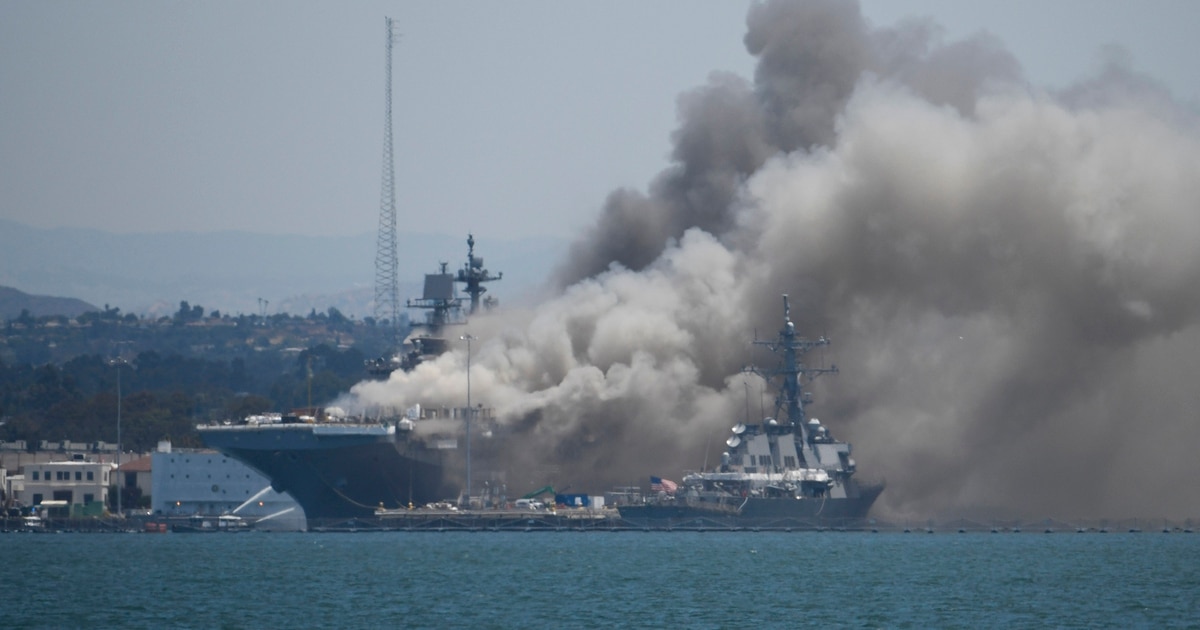 WASHINGTON – In deciding how to move forward with the warped and carbonized hulk of the amphibious assault ship Bonhomme Richard, U.S. Navy leaders face a series of choices and all of them are bad.

The Navy has not yet produced an estimate to repair the damage to the ship, which burned for five days in July. Assessing the full extent of the five-day fire that gutted much of the upper decks and levels of the ship will take some time yet.

But no matter what the Navy decides, it will be painful.

The bottom line? The Navy can either: fix Bonhomme Richard at enormous cost; replace her with a new LHA, a class of ship that Congressional Research Service says is running about $3.8 billion per hull, further constricting an already squeezed shipbuilding budget; try to pull an old big-deck out of mothballs and overhaul it for a few years of service; or it can cut bait entirely and lose the capacity all together.

The service is facing a budget crunch, with the Columbia-class ballistic missile submarine slated to have an outsized impact on the service’s budget for years. That means replacing the older Wasp-class amphibious assault ship (LHA) with a more capable and much more expensive America-class LHA would be challenging without a congressional largess.

Officials who spoke on background said that the Navy’s working assumption is that the repairs could cost as much as, or even exceed, $1.5 billion, though that number is subject to change based on a full assessment of the hull that has not been completed yet. If the repair cost $1.5 billion or thereabouts, it would roughly equal the original cost of construction. But that would still be significantly less than the cost of building a new big deck to replace the Bonhomme Richard.

In a phone call with Defense News, a Navy official who spoke on background said there were four ongoing investigations regarding the July Bonhomme Richard fire. Naval Sea Systems Command is conducting an investigation and a failure review board, geared toward safety and lessons learned. A command investigation delves into how the ship’s chain of command handled the situation both prior to and during the catastrophe. And finally, a Naval Criminal Investigative Service investigation joined by the Bureau of Alcohol, Tobacco and Firearms is also on scene.

On top of everything else, the damage assessment team has to “take a back seat” to the criminal investigation while it is ongoing, the official said.

All the teams are trying to stay out of each other’s way, but some spaces that a damage assessment team might need to access are inaccessible because the criminal investigators might be using them, for example, the official said.

This has hampered progress toward getting a fuller picture of what needs to be done and how much it will all cost to repair, the official said. All four investigations feed into one another and the official explained the best guess now is that the results may not be available until the end of the year, either in November or December.

In all, the Navy believes it’s possible to repair Bonhomme Richard, but the decision will ultimately be “a strategic one,” the official said, He added that on the San Diego waterfront, which teamed up to fight the nearly week-long fire, sailors are hopeful that the ship will be repaired.

The consensus among Navy analysts who have seen the damage to Bonhomme Richard in pictures and heard it described by the chief of naval operations in a July memo obtained by Defense News, is that large sections of the ship will need to be re-fabricated entirely.

Industry officials who spoke on background said It may be possible to build sections of the ship at Huntington Ingalls Industries’ shipyard in Pascagoula, Mississippi, where the ship was built and float them through the Panama Canal to assemble on the West Coast. But it’s unclear if Ingalls has the capacity to accommodate that kind of an interruption to the already jam-packed schedule with more than a dozen amphibious assault ships, dock landing ships, destroyers and Coast Guard National Security Cutters already either under construction on in the planning process, according to an Ingalls Shipyard fact sheet.

It’s also unclear if the West Coast’s limited dry dock infrastructure, already strained to keep up with maintenance jobs and new ship construction, would be able to support a plan like that.

Likewise, the ship may be able to be towed through the Panama Canal to Ingalls Shipbuilding but the same capacity question arises, said Bryan Clark, a retired submarine officer and now a senior fellow at Hudson Institute.

If the repair requires “Bonhomme Richard to go back to Ingalls, it is unclear if they have the space and manpower to support the job without significant growth in the workforce,” Clark said.

A fire continues to be fought into the evening on board the amphibious assault ship USS Bonhomme Richard (LHD 6) at Naval Base San Diego, July 12, 2020. (MC2 Austin Haist/Navy)

Repairing, versus procuring a new America-class ship would have the added benefit of pulling money from a different pot of money than the already accounted-for shipbuilding budget. Instead, the money would come from the operations and maintenance fund.

But that approach isn’t exactly a panacea for the Navy’s Bonhomme Richard problem, Clark said.

“Additional O&M funds for BHR would come from existing O&M accounts that are already pressurized,” he said. “If the Navy doesn’t get additional funding from Congress, the repair may not be feasible.”

An alternative to a full repair would be to try a partial repair to return the ship to some usefulness, Clark said.

“Wasp was used as a tech demonstration and concept development ship for several years in the last decade because it needed various upgrades,” he said. “Wasp is now back in full service, of course. BHR could, however, be returned to partial service, for example as a F-35 carrier, but the well deck could be left unrepaired if it is too hard to fix.”

But even that option may not be feasible, and the ship may be much more damaged than we know yet, said Sal Mercogliano, a former civilian mariner and maritime historian with Campbell University who studies the maritime industry closely.

“I think Bonhomme Richard is a total constructive loss and they’re just not admitting it yet,” Mercogliano said. “The amount of damage done to her is difficult to assess because she burned and held all that heat for so long.

“Even in a building that catches on fire, you immediately start worrying about the integrity of the structure. That’s magnified on a ship because you have all that steel that conducts all that heat throughout the structure. You would have to analyze every centimeter to see where the weaknesses in the steel are, let alone getting her underway and putting all those stresses on the hull.

“She was cooked for six days. In the commercial industry, we’d write it off and get the insurance money.”

If the damage assessment team finds that the hull is too damaged to be salvaged, Hendrix suggests looking at one of the older classes of big-deck amphibs, such as the Tarawa-class ships. Both Peleliu and Nassau are in the reserve fleet.

“I don’t know what that would cost, but I’m betting it would be less that what we’d spend on a Bonhomme Richard rebuild,” he said.

The issue is that the old LHA class is likely incompatible with the F-35, said Mercogliano.

“Even if you broke one of the Tarawas out, they still can’t do the F-35,” he said. “It doesn’t have the flight deck for it and it’s an open question as to whether the elevators could handle it.”

The Navy has cut bait entirely on a fire-damaged ship in the recent past.

When a 2012 arson devastated the Los Angeles-class attack sub Miami, the Navy opted to decommission the ship after the repair bill rose to $700 million. That was, however, at a time when the Navy was taking a huge financial hit from across-the-board budget cuts.

The Navy took more than a year to decide to scrap Miami.

For Mercogliano, if the Navy doesn’t want to lose the capacity, it may just have to bite the bullet and buy a new one from the shipbuilding fund.

“You’d be better off spending the money to get a brand-new ship and getting 30- to 40 years out of it,” he said.

China contained Covid-19. Now, hundreds of millions of people there are about to go on vacation at the same time