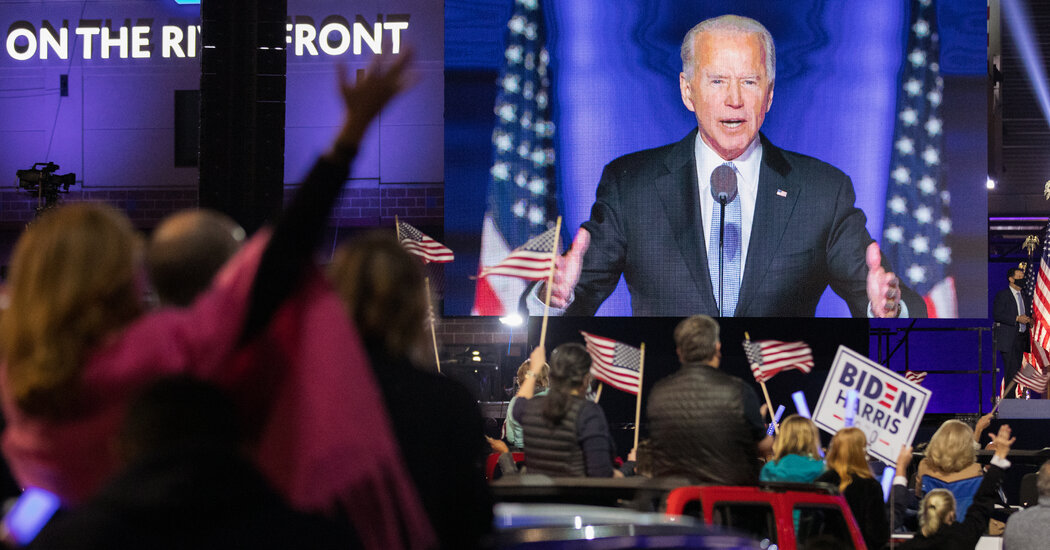 Joseph R. Biden Jr. waited a long time to give the speech he delivered in Delaware on Saturday night. Not just the five days since Election Day, but arguably the 48 years since he was first elected to the Senate, during which he ran for president three times. And at age 77, as Mr. Biden came trotting up the runway to an explosion of car horns and cheers, beaming and looking almost surprised by the ovation, it was clear that his moment had arrived.

Here are five takeaways from the president-elect’s victory speech.

A new tone from the top.

The contrast between Mr. Biden and President Trump was bracing and notable in almost every passage, as the president-elect invoked his own spirituality and shared credit for the moment with his supporters and the people around him.

He quoted from a hymn, “On Eagle’s Wings.” He thanked his supporters: “I owe you, I owe you, I owe you everything.” He warmly praised Kamala Harris, his running mate, and celebrated the fact that she would be the first woman, let alone woman of color, to serve as vice president: “It’s long overdue, and we’re reminded tonight of all those who fought so hard for so many years to make this happen.”

Most of all, even as the nation faces one of the darkest periods in its history — a deadly pandemic, economic decline, political polarization — Mr. Biden was relentlessly optimistic, even cheerful. “We can do it,” he said. “I know we can.”

There were many notable passages in the speech, but one stood out. “Let this grim era of demonization in America begin to end here and now,” he said. That is probably a line that people will talk about long into the Biden presidency.

Mr. Biden mentioned Mr. Trump’s name only once during his 17-minute speech. He ignored the fact that the president had not conceded, and that he had challenged — without any evidence — the legitimacy of the election. Mr. Biden also did not note that many top Republican leaders, presumably following Mr. Trump’s lead, had not offered him the customary congratulations.

But if Mr. Biden did not dwell on the president, he certainly spoke to his supporters, a notable contrast to Mr. Trump’s speech after his own victory in 2016. “To those who voted for President Trump, I understand your disappointment tonight,” he said. “I’ve lost a couple of elections myself. But now, let’s give each other a chance.”

And while he ignored Mr. Trump’s protests about the election, Mr. Biden made clear that there should be no doubt about the legitimacy of the outcome. “The people of this nation have spoken,” he said. “They have delivered us a clear victory. A convincing victory. A victory for ‘We the People.’ We have won with the most votes ever cast for a presidential ticket in the history of this nation — 74 million.”

Mr. Biden’s strategy here was clear. He has exceeded the 270 Electoral College votes needed to become president, and may end up gathering more than 300. He is now moving past the contest with Mr. Trump and into the role of president-elect. The transition is at hand, and the trappings of the presidency have begun to surround him — apparent in the size of the Secret Service contingent that followed him to give his speech, and the way every television station spoke of him as the president-elect.

He is seeking to relegate Mr. Trump to the sidelines, and turning to the urgent business of forming a new government and dealing with the crises he will face.

Priority one: The pandemic.

Mr. Biden left no doubt that the coronavirus pandemic would be a priority for his administration in a way that it has not been under Mr. Trump.

Mr. Biden announced that on Monday, he would appoint top science and health experts to a committee to craft a plan for battling the pandemic, which he said would be ready to put in place when he and Ms. Harris take office in January. Mr. Biden told the nation that getting the coronavirus under control was crucial to normalcy and economic prosperity.

“We cannot repair the economy, restore our vitality or relish life’s most precious moments — hugging a grandchild, birthdays, weddings, graduations, all the moments that matter most to us — until we get this virus under control,” he said.

Mr. Trump has taken a much different approach. Throughout his campaign, he urged Americans not to fear the virus, asserting that the danger was being exaggerated by his political opponents. He defied the advice of health officials on precautions like wearing a mask, even after he himself was diagnosed with the virus.

Mr. Biden’s victory comes as the nation is setting daily records for new infections and the health authorities have warned of a bleak winter. Masks were everywhere at his celebration.

Seeking ‘the confidence of the whole people.’

Mr. Trump defined the tone of his presidency at his inauguration, with a dark speech in which he notably did not reach out beyond his base of supporters. The strategy had lifted him to a narrow victory in 2016 — in the Electoral College; he lost the popular vote — and he sought to reprise it in his losing campaign this year.

Mr. Biden aggressively moved in the other direction.

“I pledge to be a president who seeks not to divide, but to unify — who doesn’t see red and blue states, but a United States,” he said on Saturday. “And who will work with all my heart to win the confidence of the whole people.”

To some extent, that reflects what Mr. Biden said during the campaign, but the approach will take on a new urgency as he becomes president. Pending the outcome of two runoffs in Georgia, the Senate is controlled by Republicans, and he will need to reach out to senators from the red states if he wants to enact an agenda.

Their names in lights.

There have been some impressive pyrotechnics during this campaign — the ones over the Washington skyline on the night Mr. Trump accepted the Republican nomination from the back lawn of the White House come to mind.

This one, though, set a bar that may be hard to match: Fireworks and drones spelled out Mr. Biden’s name, Ms. Harris’s name and a map of the United States. Mr. Biden and Ms. Harris, surrounded by their families, stood onstage staring into the Delaware sky, lit up again and again on the night that Mr. Biden has been awaiting for most of his life.

Thousands gather to hear Biden give victory speech in Wilmington