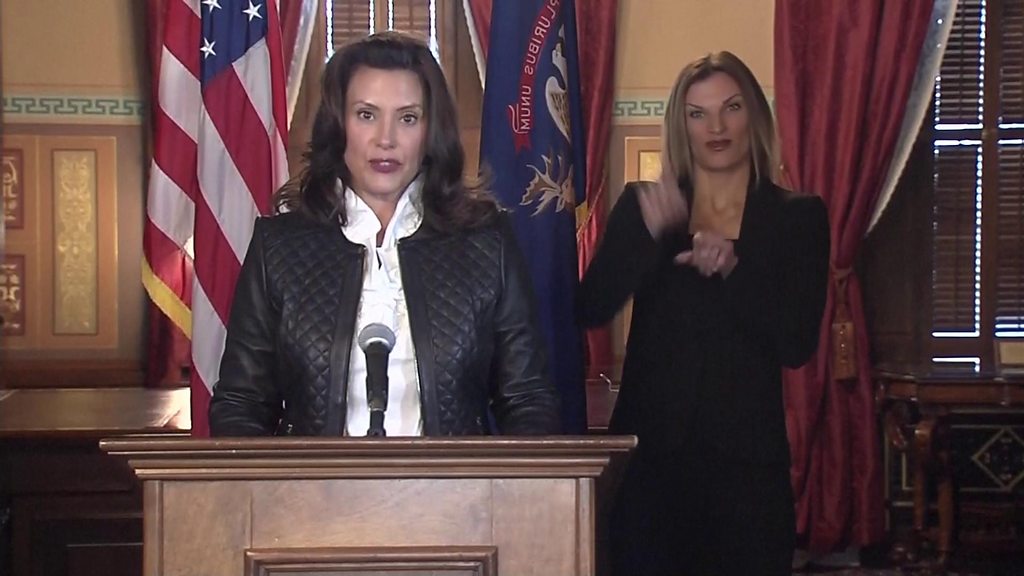 The FBI says it has thwarted a plot to abduct and overthrow Michigan’s Democratic Governor Gretchen Whitmer.

Mrs Whitmer has become a target of coronavirus sceptics after enacting strict mitigation measures that were overturned by a judge last week.

Officials say the kidnapping plot involved six men who planned to hold a “treason trial” for her.

“Hatred, bigotry and violence have no place” in Michigan, Mrs Whitmer said, describing the accused as “depraved”.

What were they allegedly planning?

According to a sworn FBI affidavit, an undercover law enforcement source attended a June meeting in Dublin, Ohio, where a group of Michigan-based militia members discussed overthrowing state governments “that they believed were violating the US Constitution”.

“Several members talked about murdering ‘tyrants’ or ‘taking’ a sitting governor,” the charging document states. In one video, a suspect denounced the state’s role in deciding when to reopen gyms during the coronavirus lockdown.

Thirteen people were arrested by investigators.

Six men – five from Michigan and one from Delaware – are accused in federal court of plotting the kidnap. They allegedly planned to hold a “treason trial” against Mrs Whitmer.

The other seven face charges of terrorism and gang-related offences in state court in connection with the alleged abduction plot.

The group wished to gather about “200 men” to storm the capitol building and take hostages, including the governor. They hoped to enact their plan before the November presidential election. If that failed, they planned to attack the governor at her home, officials say.

The accused “co-ordinated surveillance of the governors’ vacation home”, said the US Attorney for the Western District of Michigan, adding that they also planned Molotov cocktail attacks on police officers, purchased a taser, and pooled their funds to purchase explosives and tactical equipment.

What do we know about the group?

The accused held weapons training in several states, and at times attempted to create bombs, the FBI says, adding that their training was captured on video.

Michigan Attorney General Dana Nessel said that separate to the kidnapping charges seven members of the “wolverine watchmen” militia will be charged by the state with gang affiliation and providing material support to terrorists. Ms Nessel said the arrested militia members hoped to start a civil war.

“Michigan law enforcement officers are united in our commitment to rooting out terrorism in any form and we will take swift action against anyone seeking to cause violence or harm in our state,” Colonel Joe Gasper, director of the Michigan State Police, said in a statement announcing charges against the “wolverine watchmen”.

What has the governor said?

In a press conference on Thursday, the governor tied the plot against her to the rhetoric of President Donald Trump, who she said has spent the last several months “stoking distrust, fomenting anger and giving comfort to those who spread fear and hatred and division”.

The governor pointed to Mr Trump’s failure to explicitly condemn white supremacists at the first presidential debate last week, calling his remarks a “rallying cry” for hate groups. He repeatedly condemned such organisations in the days after the debate.

Joe Biden, who is running for president against Mr Trump, condemned militias as “a genuine threat” and said Mr Trump’s “liberate” tweet encouraged militias. “The words of a president matter,” he said, adding: “Why can’t the president just say stop, stop, stop, stop?”

Numerous violent incidents have been linked to citizen militia groups across the US in recent years. Adherents, who are often white men, sometimes brandish weapons during protests. The Department of Homeland Security warned this week in an annual report that violent white supremacy was the “most persistent and lethal threat in the homeland”.

Mrs Whitmer’s lockdown orders drew thousands of protesters to the state capitol, where many compared her to German dictator Adolf Hitler. In April, Mr Trump implied support for the protesters, tweeting “LIBERATE MICHIGAN”.

In May, armed protesters opposed to lockdown stormed the state capitol.

“None of us has faced a challenge like Covid-19,” Mrs Whitmer said on Thursday. “We are not one another’s enemy. This virus is our enemy, and this enemy is relentless.”

Last Friday, the state’s Supreme Court ruled that Mrs Whitmer did not have the legal authority to issue emergency executive orders and that that responsibility belonged to the state’s legislature.

Following the ruling, the attorney who argued the case before the top court advised citizens to “burn your masks”, which health officials say are necessary to prevent the spread of Covid-19.

A man fell to his death while taking pictures on a cliff in Arizona. Authorities discovered other remains while recovering his body