Exclusive: ‘It Has Made Us Stronger’ Says Assange Supporter Charged During UK’s COVID-19 Lockdown 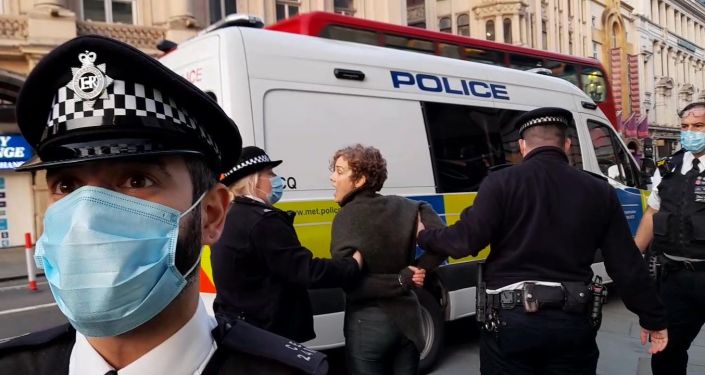 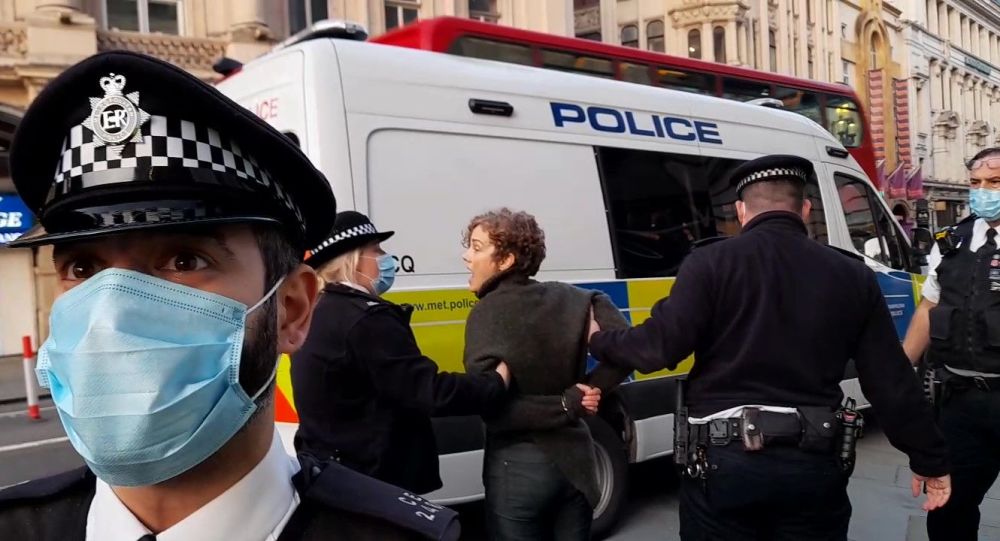 Civil liberties and human rights groups have warned that police in England and Wales have become increasingly hostile to people engaged in legally protected protests amid the various restrictions imposed in the name of tackling the COVID-19 pandemic.

Four supporters of imprisoned WikiLeaks publisher Julian Assange were arrested by the Metropolitan Police Service at the Eros statue in Piccadilly Circus, on 7 September 2020. This is despite the fact the group were engaged in a static protest, which has been conducted every Saturday for a number of months, and for which organisers had submitted a risk assessment that was approved by the local council.

Jill Everett is a published author, Yoga teacher and personal instructor who lives in London and New York. Ms Everett is one of the four protesters who was detained by police. She now faces charges of assault despite the fact that she says it was in fact she who was assaulted by the police whilst participating in a lawful protest.

Sputnik: Explain what exactly you were doing in Piccadilly Circus on 7 November.

Jill Everett: We have set up a fixed protest at Piccadilly Circus for many months on Saturday from 4-6pm on the Eros statue steps. We give speeches to inform the public about who Julian Assange is and about his plight. We see this is as our most important role as mainstream media has been deliberately silent regarding the massive injustice that his kidnap and jailing represents to what little remains of world press freedom and the public’s right to know. We give out a grassroots newspaper and flyers and speak to people.

Sputnik: You had been granted permission for this protest?

Jill Everett: We have registered a risk assessment for the protest with Westminster Council for every Saturday, which, we were told, was approved by both the council and the police.

Sputnik: What happened after you set up your protest?

Jill Everett: When we arrived we were approached by a male police officer who had been standing with a female police officer near shops at the side of the statue. He asked what we were doing there and he was told we were doing our usual static display and he said that it was fine to set up our banner and placards as long as we didn’t “go marching down the street”. We also followed social distancing guidelines.

Approximately five minutes after that four police vans turned up and police surrounded our small group of 15 protestors and were extremely aggressive, telling us to leave immediately, saying we could not be out protesting, not even in groups of two even though [UK Home Secretary] Priti Patel had said was okay. Protestors began to pack up belongings and discuss this point with police, but none of the protesters flat out said ‘no, we won’t leave’. We were on our way towards the street when the sergeant gave the order to move it along and suddenly the cops started demanding our addresses, and grabbing arms and pulling and pushing people, threatening arrest.

I was grabbed and handcuffed by two of these thugs before they even said I was arrested, and I repeatedly asked “why are you taking my backpack? Why are you arresting me? What are you arresting me for?”, with no answer. One officer intentionally stepped on my foot repeatedly. The other thug twisted my arm behind my back and simultaneously ripped my backpack off my back, and had a handcuff on me before even saying I was arrested. I have bruised and cut arms and pain in my arm and foot.

After this police brutality and thuggery they said I was charged with assaulting them. I was arrested for “assault and beating of an emergency worker”, and transported to Charing Cross station where I was checked in and had DNA, prints and mug shots taken and I was put in a cell for seven hours. It was irregular behaviour and there were many unprofessional actions by the police. I was never read my rights at the time of arrest and at the police station was again not given the rights to which I am entitled, such as a soundproof room to talk with a solicitor in private.

I was offered a phone in an open waiting room next to a desk of four police officers, until I demanded a soundproof meeting room. My phone message to a friend to alert them to my stay in jail was never delivered, nor was I permitted to call the US embassy, despite notifying requesting and notifying them of my dual UK/US citizenship. The desk sergeant said that they would call the embassy for me and inform them instead of allowing me the call. I asked several times if they called the embassy and a woman finally told me that they called and no one was there so I should call myself when I get out.

After initially being told they could participate in a static protest police arrested 4 supporters of #JulianAssange at Piccadilly Circus.

The demo has been conducted every Saturday, for many months, with a risk assessment submitted to & acknowledged by the local council. pic.twitter.com/QbfeMvG9Xg

I complained about my heavily bruised and bleeding arm and they later sent a doctor to my cell who offered antidepressants and painkillers, but wouldn’t give me ice for the bruising or antiseptic dressing for the wounds. There was no sink in my cell and no toilet paper and the toilet appeared to be in full view of CCTV camera. When I received my belongings back, on check out from the station, the sealed plastic blag which contained my belongings was ripped open before I received it. I do not know when they ripped it open or why.

The desk Sergeant also said something to the effect of “so you are American and think anybody should just be free to do whatever they want? America is a mess right now, its anarchy over there, they have no control. It’s lost. Terrible”. The other desk sergeant also told me a few times during check in process that “it is not like the American system here in police stations and prisons and laughed”. I’m not sure what was meant by that.

Sputnik: Did the police explain or justify their actions?

Sputnik: Are there criminal prosecutions expected?

Jill Everett: They charged me with assaulting and beating an emergency worker [ie a police officer]. I have to go to Westminster Magistrates Court Dec 30th then the trial date is set and trial will be in new year. The other three protesters that were arrested have also been released pending an investigation for alleged breach of COVID lockdown restrictions.

​Sputnik: Why do you think they behaved in the manner in which they did?

Jill Everett: They are obviously trying to scare people out of activism. They were on a mission, it seems, to be very aggressive from the start and the boss was telling them where to go and what to do. Perhaps they were training those who had not worked protests before? Or sending a message to other protestors? It seems to me to be about power and control and trying to keep up with protestors getting more angry and more savvy with tech, body cams and knowing their rights

Sputnik: How are you and the other protesters going to proceed now that you have all been released?

Jill Everett: It has made us stronger and more resolved to continue our work exposing the injustices meted out to Julian Assange. We are seeking legal advice to challenge in court the legality of wiping out a fundamental human right – the right to protest – as the public now knows the change to laws and the second lockdown was premised on lies and outdated statistics. This is even more vital a right for Julian’s supporters because every part of UK justice has been perverted by the state to disadvantage an innocent man; two years in a supermax prison for not reporting while on bail for a matter that was wholly a construct of corrupt officials such as [former Director of Public Prosecutions and current Labour Party leader] Keir Starmer in the Crown Prosecution Service, part of a corrupt international cabal of political figures..

At the helm of this cabal is the CIA which was listening to Assange’s every conversation through bugging the embassy where he sought asylum from the warlords who called for him to be drone attacked and poisoned and seek to jail him for 175 years. This group includes the [former] Chief Magistrate [Lady Emma Arbuthnot] with her family’s arms dealing and cyber security vested interests that is overseeing the extradition case in a low level court by a puppet magistrate who has denied Julian his basic human rights. This man is an innocent journalist and charged with nothing. We can see in Julian Assange’s case that all of our basic human rights can be breached when a country which seeks to have universal jurisdiction, the United States, can arrange for another country to trash its legal system to punish an innocent man by the pollution of due process. And the last vestige of our ability to inform the public about this travesty of justice is now being taken away from a grassroots collective of people who see our job as educating the public about the case on a person by person basis through our actions in the street.

We are more determined than ever. Out of adversity comes creativity. We can always improve and reach out to the world in a variety of ways, and we can continue with demonstrations during lockdown with groups of one or two at various key locations around London. More of us will wear bodycams and do legal observer trainings and study protest law with legal advisors. We will not be stopped. We are reaching out to government bodies to request that police know the current legislation and have proper training before working protests and making unlawful arrests with assault and police brutality. We will not accept that! We demand out rights. And we demand that the UK release Julian Assange and USA drop all charges. Free Julian Assange!

What does Ersin Tatar’s win mean for Northern Cyprus?