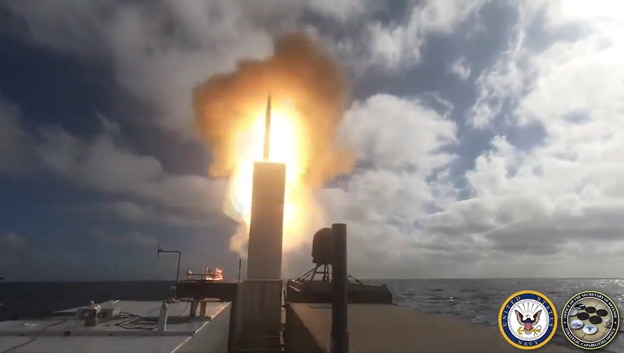 ARLINGTON, Va. — Steps by Lockheed Martin to virtualize its Aegis Combat System are helping underpin the U.S. Navy’s vision for its future integrated combat system as well as the Pentagon’s vision for joint all-domain operations.

Past investments in the Aegis Common Source Library, or CSL, are paying dividends now, said Joe DePietro, Lockheed’s vice president and general manager for naval combat and missile defense systems. It’s become increasingly easy to take software for Aegis and for the Ship Self-Defense System and run that code from suitcase-sized computers.

The CSL was established in 2012 and has since expanded from the original Aegis system to also include the Ship Self-Defense System that runs on aircraft carriers and amphibious ships, which Raytheon Technologies originally developed but Lockheed Martin later won a contract to continue managing. CSL made possible the COMBATSS-21 system, which runs on some littoral combat ships and will go on the Constellation-class frigate, and which is a somewhat scaled-down version of the combat system that runs on larger cruisers and destroyers.

That software controls missions ranging from ship self-defense to integrated air and missile defense, and from land-based missile defense to offensive strike. The ability to operate the combat software independent of massive and complex shipboard hardware means Lockheed can increasingly demonstrate the power of its combat systems in Army and Marine Corps applications, as well as on smaller Navy vessels such as unmanned surface vehicles, DePietro told Defense News in a Jan. 6 interview.

The company has already expanded its combat software into several kinds of operations.

On land, Lockheed used the Virtualized Aegis Weapon System as the heart of the Army’s midrange capability, alongside the company’s own four-cell expeditionary configuration of the Mk 41 Vertical Launching System as well as Raytheon’s Joint Automated Deep Operations Coordination System, Tomahawk missile and Standard Missile-6. The midrange capability system, recently renamed Typhon, would be set up at an Army battery operation center and represents a relatively mobile setup for employing existing products for a new mission to track and prosecute targets from the ground.

In the air, the Marine Corps experimented with “Aegis Airborne” during the Northern Edge 2021 exercise in Alaska to create a tactical picture in the air, DePietro said. According to Lockheed’s website, the company tested a solution that “connected the Army, the Marines and Navy in a key offensive and defensive fires mission” through a machine-to-machine interface.

“My mantra here has been getting the ‘N’ out of NCMDS,” he added, in a nod toward doing business with the other armed services and helping integrate joint force systems for joint all-domain operations.

But the Navy can also benefit from a virtualized Aegis. DePietro said the company already deployed its four-cell VLS and the Virtualized Aegis Weapon System from the Navy’s unmanned surface vessel Ranger, shooting a missile from a large USV as a proof of concept of a capability the service wants to field as part of its future force design.

In this year’s upcoming Rim of the Pacific international exercise off Hawaii, DePietro said, the company plans to use that same package either from a littoral combat ship or another asset to show the ability to quickly field four missile cells and a combat system at sea or ashore.

“We’re really looking at how do we evolve … from our surface Navy combat systems into an integrated combat system that can be fielded across the board,” he said.

What the Pentagon wants

The Defense Department is increasingly looking to achieve joint all-domain operations without breaking the bank. Things like adding new missions to existing missiles helps, such as a ground-launched SM-6 missile as part of Typhon, or a maritime-strike Tomahawk under development by Raytheon. So do efforts like Joint All-Domain Command and Control, which would connect operators across the services and ensure they see a common operating picture to act on each other’s targeting data.

DePietro said Lockheed previously integrated many of its own systems into the Aegis CSL during work for the Navy, including on H-60 helicopters. Now, he added, the company is integrating more of its products as it expands work with the Army, including the Terminal High Altitude Area Defense battery and the PAC-3 Missile Segment Enhancement.

This effort could also open up integration opportunities for the foreign militaries using not only Aegis but also other Lockheed-made aircraft or missiles. But DePietro stressed the company isn’t trying to create a proprietary system but rather working proactively with other large defense contractors like Northrop Grumman and Raytheon to integrate their weapons and systems, while using Aegis software as the heart of an integrated network of platforms, sensors, command-and-control systems, and missiles.

Exercises like Northern Edge, Valiant Shield and RIMPAC are allowing these companies to show off existing integration capabilities, which helps the services pinpoint what else they want going forward.

“The flexibility of how we evolved from Aegis back in the day — a very heavy anti-air warfare kind of mission — to where we are today and what we’ve done with the compiling of the Common Source Library allows us now to look at all the work we’re doing across anti-submarine warfare, anti-surface warfare, anti-air warfare, self-defense, ballistic missile defense, etc.,” DePietro said.

What the Navy wants

The submarine community currently has an Advanced Rapid Commercial Off-The-Shelf Insertion, or ARCI, model that allows for regular hardware and software updates to the open-architecture sonar system. Any company, big or small, can offer ideas for the next tech insertion point, and if it’s matured and integrated by a certain deadline, then that new capability is included in that next iteration of capability.

DePietro said the virtualization of Aegis has led to a 200% increase in automated testing, which means the company can develop new capabilities and get them through testing and then deployed much faster.

“We’re looking towards the view of the path from where we are today, where you hear about Baseline 9 and Baseline 10, to more about capability builds and being able to look at the opportunity to field capabilities each year on a ship in the future,” he said. “So we’re doing a bunch of stuff in the CSL now, and what that’s doing is it’s reducing our build times and it’s getting us into a position where we can get into sort of the test-analyze-fix mode faster. [It’s] really a great partnership with [Program Executive Office Integrated Warfare Systems] and [Naval Sea Systems Command] to look at what do we need to do from a process perspective in order to enable us to move faster as we get these capabilities online, and as we containerize and adapt the CSL and the Virtualized Aegis Weapon System.”

Once Lockheed gets this process right, DePietro explained, the idea would be to increase its work with third-party developers who could offer their own ideas for capability improvements, run the application on tactical hardware and code at a Lockheed facility, and see what additional engineering is needed to integrate with the rest of the virtual Aegis system.

If successful, this would lead to an ARCI-like ability to field yearly capability updates with whatever is ready, instead of massive block updates on longer timelines.

For the time being, much of the Navy’s use of virtualized Aegis is limited. The service has put Aegis virtual twins on a few ships, mostly for collecting data to assess how the virtual system housed in a suitcase-sized package compares to the full Aegis system installed on ship hardware.

But as confidence in Virtualized Aegis Weapon System grows, DePietro said some ships could receive upgrades during major maintenance availabilities to run on the virtual combat system. The ships would need open-architecture hardware that allows for “infrastructure as a service,” a basic cloud-computing model where a cloud provider hosts the storage, server and networking resources, and then the latest version of virtual Aegis could be installed, with upgrades and updates added once they become available.

DePietro said Lockheed is already working with Program Executive Office Integrated Warfare Systems on a tech insertion opportunity for the Arleigh Burke destroyer program that creates the conditions for infrastructure as a service. That could be inserted into future procurement of Burkes or into the upcoming DDG(X) program, which could be designed from the ground up with open hardware that accommodates virtual combat system software.

Rear Adm. Paul Schlise, the director of surface warfare on the chief of naval operations’ staff, told reporters last week the Navy is serious about plans to develop an integrated combat system for all its future manned and unmanned ships. But he made it clear the future ICS must be interoperable with existing combat systems because the Navy can’t take an intermission to switch from one system to another; it has to flow seamlessly from one into the next as ICS is developed.

The software in the Aegis Common Source Library paired with common computing infrastructure, he said, is a good start to getting to ICS.

“We don’t view this as a complete revolution,” he said after a Jan. 11 speech at the Surface Navy Association’s annual conference, adding that the ability to pull a combat system for the Constellation-class frigate program out of the code already in CSL is a good indication the Navy and industry are moving in the right direction.

“There’s some players who have been central to the Aegis program over the years: We’re not telling them they no longer have a role in what the integrated combat system is; in fact, we need their best and brightest to help us make this move on to the next thing.”

As for the rapid upgrade process DePietro envisions, Schlise said: “You need to be able to upgrade [ships’ combat systems] through the hatches on the ship — no hull cuts, not interested. You start talking about hull cuts, then you’re talking about 12-, 18-month maintenance availabilities. That’s too long. If we can do this through the hatches and do a combat systems upgrade in a four-week availability, that’s more what we’re talking about.”