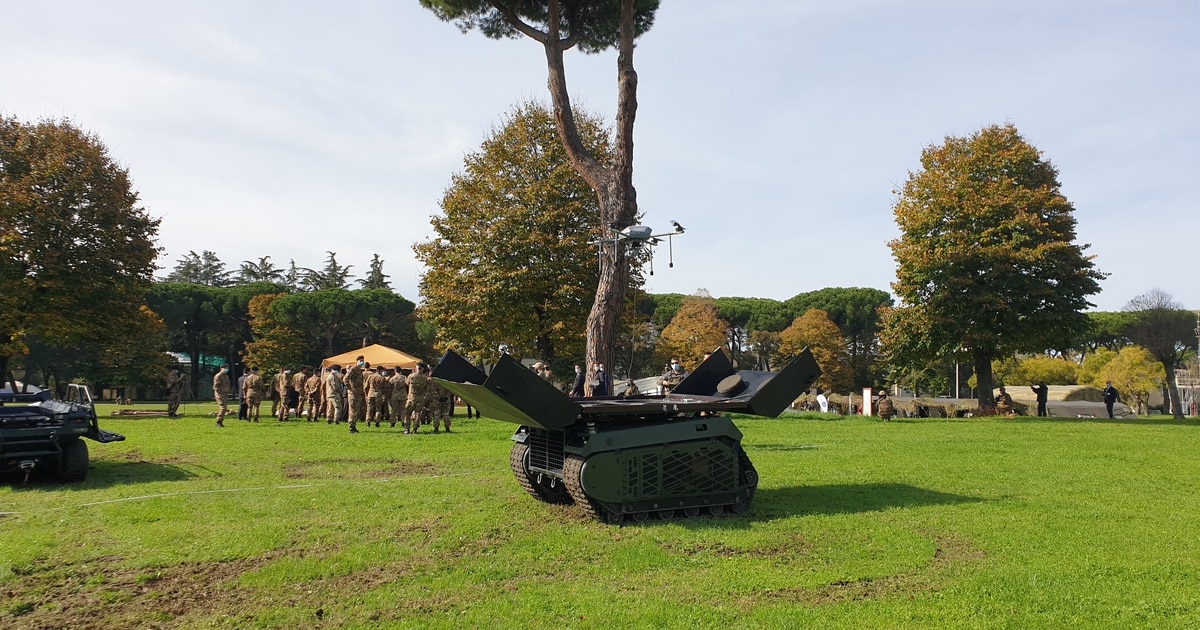 A photo distributed by Milrem shows the vehicle at an Italian Army base near Rome last month with its cargo hold folded wide open and the contents — a small surveillance drone made by Estonia’s Threod Systems — hovering above.

The THeMIS vehicle, which is short for Tracked Hybrid Modular Infantry System, is configurable for logistics, combat, reconnaissance or explosive ordnance disposal. In its basic version, it looks something like a cabriolet tank, roughly waist-high and piano-wide.

The various combat setups include weaponry such as guns, anti-tank missiles or launchers for suicide drones mounted on top, according to Milrem’s website. The company doesn’t make its own arms, a spokesman told Defense News, but rather integrates weapons from other manufacturers.

“Pulling the trigger is always done by the human,” the spokesman said when asked about the vehicle’s level of autonomy, adding that all weapon add-ons by third-party vendors are expected to abide by that rule.

The demonstration in Italy follows a string of recent announcements by armed forces in Europe and elsewhere using the THeMIS platform for testing or operations.

This spring, the Estonian Defence Forces, or EDF, completed a yearlong deployment with the vehicle during the French-led Barkhane counterterrorism mission in Mali. The vehicle accompanied soldiers on patrol and ferried supplies around the base.

“We collected a lot of valuable data and feedback during the deployment and although EDF’s experience with the THeMIS was positive, there is always room for improvement,” Kuldar Vaarsi, CEO of Milrem, was quoted as saying in a statement. “However, after this experience in Mali, we are confident that the THeMIS is more than capable of supporting operations in extremely hot climates.”

The company previously said it was preparing to support another deployment with the country’s forces at the end of 2020.

In September, the Netherlands signed a joined procurement agreement with the Estonian government to buy seven THeMIS vehicles from Milrem — four for the Royal Netherlands Army and three for Estonian forces.

For the Dutch, the purchase brings its inventory of the ground robots to six, with the two bought in 2019.

“So far, the THeMIS has successfully been used for research and experiments by operational units of the 13 Light Brigade in Scotland, Germany, The Netherlands and during a live fire exercise in Austria,” Lt. Col. Martijn Hadicke of the Royal Netherlands Army was quoted as saying in a company statement. “The addition of four extra THeMIS vehicles with a Remote Controlled Weapon System that is operated by a soldier provides us the opportunity to continue to develop concepts to enhance the combat power and decrease the risk for our soldiers.”

Along with the most recent outreach to Italian forces, Milrem rolled out what it dubs the Intelligent Systems Implementation Analysis and Assessment program, a three-step process designed to offer governments new capability ideas for their military robotic needs.

The company is already sitting pretty when it comes to charting a course for robotic ground vehicles under the auspices of the European Union. Milrem has positioned its THeMIS vehicle as the reference platform in a multinational program aimed at developing a common design architecture underpinning future developments in the growth market.