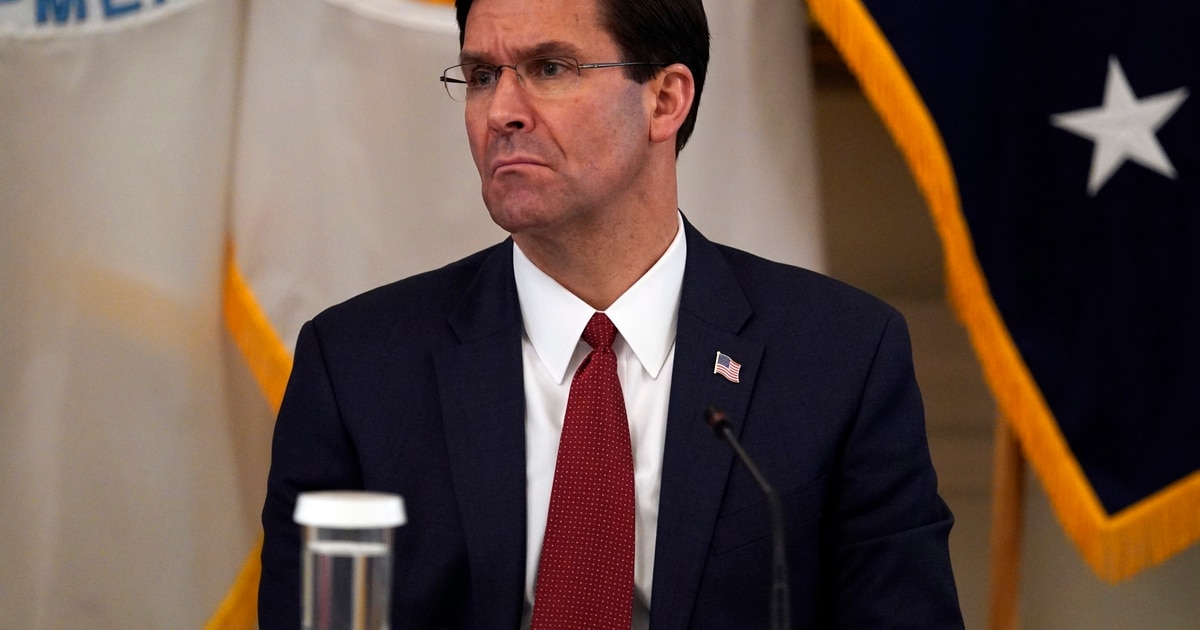 Trump announced the move in a Nov. 9 tweet, just days after the presidential election was called in favor of former Vice President Joe Biden.

Esper, a West Point graduate and former Army lieutenant colonel, was vice president of government relations for Raytheon — the fifth-largest defense contractor in the United States — for seven years before becoming Army secretary. His most notable work leading the Army included a shake-up of the service’s acquisitions portfolio, a trend he brought with him to the top job.

…Chris will do a GREAT job! Mark Esper has been terminated. I would like to thank him for his service.

He was confirmed as defense secretary in August 2019 and now becomes the third man to exit the top job at the Pentagon under the Trump administration, following Jim Mattis and, in an acting capacity, Patrick Shanahan. (Then-Navy Secretary Richard Spencer briefly filled in as defense secretary between Shanahan and Esper.)

The announcement marks a meteoric rise for Miller, who served in the Army from 1987 through 2014, over the last year.

From 2018 to 2019, Miller served as a special assistant to the president and senior director for counterterrorism and transnational threats at the National Security Council. In January, he was sworn in as deputy assistant secretary of defense for special operations and combating terrorism, a job four levels down from defense secretary, and then was quickly boosted to fill in as performing the duties of assistant secretary of defense for special operations. He was sworn into the National Counterterrorism Center role in August.

Notably, Miller would be legally barred from taking the job through the traditional confirmation process. Under 10 U.S. Code § 113, an individual “may not be appointed as Secretary of Defense within seven years after relief from active duty as a commissioned officer of a regular component of an armed force.” As he retired from the military in 2014, Miller would not meet that threshold.

However, it does not apply to acting officials, according to Joshua Geltzer, a former counterterrorism official with the Obama administration, who is now a professor of law at Georgetown University.

Legal experts quickly raised questions about whether the appointment of Miller over David Norquist, the confirmed deputy secretary of defense, was an illegal move. A spokesperson confirmed that Norquist is still in his role at the department.

Mieke Eyoang of the Third Way think tank said “By passing over the Senate-confirmed DepSecDef, Trump is again showing he doesn’t care about the rules, continuity, or the smooth management of the largest military on earth.”

National security leaders have urged Trump to keep Esper for the duration of the lame duck presidency.

“That’s the way it ought to work, that’s the way it’s always worked, and that’s why I’ve said very forcefully that we want to send a signal to our adversaries and allies alike that the chain of command is intact,” said National Defense Industrial Association Chairman Arnold Punaro, a former Marine Corps general and staff director of the Senate Armed Services Committee.

Because Esper is respected, removing him might “create undue turbulence,” Punaro warned last week. “If the president decides to fire him there’s nothing we can do about it — but it would be a bad decision for national security.”

Esper’s removal was widely expected, as he appeared to fall out of favor with Trump following the June 1 incident when Esper joined Trump for a photo op at a church located near the White House. That incident involved crossing historic Lafayette Park, which at the time was occupied by protesters who were cleared out by law enforcement to make space for Trump and his retinue.

The secretary’s participation, along with that of Gen. Mark Milley, the chairman of the Joint Chiefs of Staff, was criticized about whether the two men were allowing the military to be used for political gain. Among those blasting the move was retired Adm. Mike Mullen, the 17th chairman of the Joint Chiefs of Staff, who attacked Esper’s statement on a call with governors in which the secretary said the government must “dominate the ‘battlespace.’”

On June 3, Esper held a news conference in which he appeared to publicly split with Trump about the idea of invoking the Insurrection Act, which would allow the president to use active-duty military personnel for crowd control.

“The option to use active-duty forces in a law enforcement role should only be used as a matter of last resort, and only in the most urgent and dire of situations. We are not in one of those situations now,” Esper said. “I do not support invoking the Insurrection Act.”

Those comments appeared to doom Esper’s long-term prospects, with multiple media outlets reporting that White House staff were furious with Esper, and that the president himself was mad and considering dumping the former Raytheon lobbyist. While Esper held onto the job then, his public appearances afterward were more guarded; he held only one more open press briefing, in July, and largely avoided taking questions from reporters who travelled with him.

In October, Esper launched a series of speeches at various Washington think tanks, which seemed designed at burnishing his legacy as having successfully implemented the National Defense Strategy. During those events, he took no questions submitted by the audience, and questions from the moderator were almost uniformly tied to the specific subject Esper wished to discuss.

Some Democratic lawmakers have already voiced fears Esper’s exit will risk national security and deepen the country’s period of uncertainty.

“This president can still do a lot of damage between now and January. We can’t take our eyes off the ball yet,” Senate Intelligence Committee ranking member Mark Warner, D-Va., said in a statement. “Secretary Esper deserves our thanks for his service. And our country deserves better than this.”

“Dismissing politically appointed national security leaders during a transition is a destabilizing move that will only embolden our adversaries and put our country at greater risk,” Smith said. “President Trump’s decision to fire Secretary Esper out of spite is not just childish, it’s also reckless.

“It has long been clear that President Trump cares about loyalty above all else, often at the expense of competence, and during a period of presidential transition competence in government is of the utmost importance.”

Joe Gould in Washington contributed to this story.

South Dakota governor is asking for donations for Trump, but watchdog says the money will likely stay with her