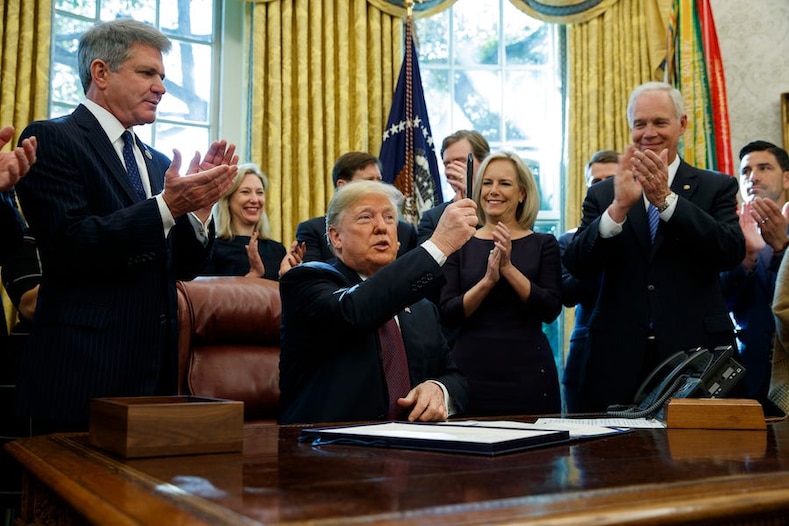 When Fox News called the state of Arizona for Democrat Joe Biden on election night, Republicans — including the Trump campaign — were furious, claiming, in contrast to their position in Pennsylvania and Georgia, that ballots should continue to be counted before a win or loss is declared in the state.

In the meantime, however, right-wing activists, including a former aide to former President George W. Bush, have come up with another explanation for the apparent setback: Sharpies.

They tried to spread an unsubstantiated conspiracy theory that poll workers, apparently able to discern Republicans from Democrats with a glance, handed presumed supporters of President Donald Trump felt-tipped pens, setting them up to invalidate their ballots.

One woman in Maricopa County has also filed a lawsuit, with the help of the conserative Public Interest Legal Foundation, claiming her ballot was rejected by a voting machine because she used a marker, the local CBS affiliate reported.

Her claim is not true, according to experts and election officials.

“Sharpies are just fine to use,” Megan Gilbertson, communications director for the Maricopa County Elections Department, told Reuters. “They do not impact tabulation, and we encourage them on Election Day because of how fast the ink dries.”

“If you voted a regular ballot in-person, your ballot will be counted,” added Arizona Secretary of State Katie Hobbs, “no matter what kind of pen you used (even a Sharpie)!”

The Election Integrity Partnership, a group led by the Stanford Internet Observatory and the University of Washington’s Center for an Informed Public, also debunked the conspiracy theory.

“There is no evidence of a plot to disenfranchise voters by passing out Sharpies at polling stations,” it posted on Twitter.

The US Cybersecurity and Infrastructure Security Agency, formed in 2018 by legislation Trump signed, has also labeled the conspiracy theory a false rumor. “Poll workers are required to provide approved writing devices to voters,” it noted.

But conspiracy theorists are notoriously immune to fact-checking. Search Twitter and, after a few articles debunking the claim, there is tweet after tweet asserting that, for example, the handing out of writing implements was  “a socialists [sic] ploy to undermine @realDonaldTrump.”

“Voted with a sharpie pen and now my vote is canceled,” another user claimed, posting a screenshot that actually indicated they had voted in person, which would then cancel their mail-in ballot.

Matt Schlapp, a right-wing lobbyist, former Bush staffer, and chairman of the American Conservative Union, the group that puts on the annual Conservative Political Action Conference, has promoted the conspiracy theory, with the caveat “apparently.”

“[T]he use of Sharpie pens in GOP precincts is causing ballots to be invalidated,” he tweeted, a claim the social network marked as “disputed” and potentially “misleading.”

In a statement, a Twitter spokesperson told Business Insider that posts “that misleading claim ballots were invalidated in Maricopa County, Arizona, on the basis of being completed with a Sharpie are being labeled in line with our Civic Integrity Policy.” The company has also created a “moment” listing fact-checks that debunk the theory.

But the notice, which prevents a post from being reshared, is not on Schlapp’s other tweets with the hashtags #SharpieGate and #StopTheSteal. Numerous other posts from less prominent users are also unlabeled, despite demonstrably false and inflammatory claims that their votes were “canceled” because they used a marker, not because they voted in person and were no longer filing absentee ballots.

Schlapp did not immediately respond to a request for comment.

In the meantime, posts from users falsely claiming to be victimized by a writing utensil continue to go viral, and not just on Twitter.

On YouTube, there are numerous videos promoting “SharpieGate,” with titles such as “Election Fraud Exposed In Arizona” and “Voting Scandal of the Century.”

On Facebook, one video was shared more than 100,000 times, as Reuters reported, before being labeled “false information.”

But YouTube, owned by Google, said it has no plans to eliminate such disinformation.

In a statement, a spokesperson for Google said “videos flagged to us by Business Insider do not violate our Community Guidelines.” But the company said it would add an “information panel below these videos.” As of Wednesday night, that panel read: “Results may not be final. See the latest on Google.”

A search for related terms, such as “Sharpie Arizona,” now brings up a link to a fact check.

While popular social networks took some steps to address the spread of viral conspiracy theories before the election, the aftermath presents a different challenge.

Have a news tip? Email this reporter: cdavis@insider.com

AOC is planning to stream on Twitch again