Election 2020 Live Updates: Biden Inches Closer to the Presidency With Lead in Pennsylvania 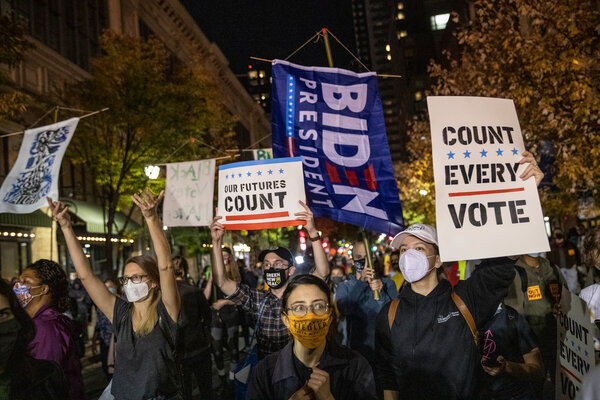 As more votes were counted and results were reported Friday morning in Pennsylvania, the Trump campaign issued a statement insisting, “This election is not over.”

“The false projection of Joe Biden as the winner is based on results in four states that are far from final,” Matt Morgan, a lawyer for the Trump campaign said in the statement.

The New York Times, The Associated Press and other major outlets have not called the presidential race.

In the statement, Mr. Morgan described the situation in Georgia, Pennsylvania, Nevada and Arizona — all states where the president is currently behind — as unsettled.

Georgia, he said, “is headed for a recount.” He claimed there were “many irregularities in Pennsylvania,” and noted that the Trump campaign had filed a legal challenge there. He asserted that in Nevada, thousands of people appeared to have “improperly cast mail ballots.” And he insisted Mr. Trump was “on course to win Arizona outright.”

“Biden is relying on these states for his phony claim on the White House,” the statement concluded. “But once the election is final, President Trump will be re-elected.”

There are 130,000 ballots left to count in Pennsylvania, many from Democratic-leaning areas. Allegheny County (Pittsburgh) has at least 37,000, and the Philadelphia suburbs have about 20,000.

PHILADELPHIA — Joseph R. Biden Jr. took the lead over President Trump in Pennsylvania on Friday as Democrats grew increasingly confident that he would win the state and therefore the presidency, with its 20 Electoral College votes emerging as his most immediate path to victory.

The latest batch of mail-in ballots from Philadelphia pulled him ahead by more than 5,000 votes. Across the state, tens of thousands of ballots have yet to be counted, mostly from predominantly Democratic areas.

Mr. Biden currently has 253 electoral votes. Should he win Pennsylvania, he would surpass the necessary threshold of 270 Electoral College votes to capture the White House.

Since Thursday, the state has been at the center of efforts by Republicans to create uncertainty about the results, by falsely claiming that election observers had not been allowed to watch the tally.

While Philadelphia is an enormous source of Democratic votes, Mr. Biden’s strength in Pennsylvania appeared to be more closely tied to improvements in the party’s 2016 performance in other parts of the state.

When votes began being counted, Mr. Trump appeared to have an early edge in the state — at one point, the president appeared ahead by half a million votes. But Mr. Biden steadily erased that lead as ballots, mostly mail-in and absentee votes, were counted over the past two days.

Winning Pennsylvania would clinch the election for Biden regardless of what happens in any of the other states that remain to be called.

The latest batch of mail ballots from Philadelphia pulled Joseph R. Biden Jr. ahead by more than 5,000 votes in Pennsylvania, putting him in a strong position to win a state that would lift him above the 270 Electoral College votes needed to win the presidency.

Across the state, tens of thousands of ballots are still to be counted, mostly from predominantly Democratic areas.

Since Thursday, the state has been at the center of efforts by Republicans to create uncertainty about the results by falsely claiming that election observers had not been allowed to watch the tally.

While Philadelphia is an enormous source of Democratic votes, Mr. Biden’s strength in Pennsylvania appeared to be more closely tied to improvements in the party’s 2016 performance in other parts of the state.

Joseph R. Biden Jr. overtook President Trump in Georgia overnight, but the slim margin of his current lead falls squarely into recount territory in the state — 0.5 percent or under.

Mr. Biden and Mr. Trump each hold 49.4 percent of the vote — with Mr. Biden ahead by a mere 1,097 votes — clearly within the margin that would permit either candidate to request a recount. (Most of the remaining votes went to the Libertarian candidate.)

It’s possible that the margin separating Mr. Trump and Mr. Biden could shift in either direction before the election is certified, but not by much. Fewer than 10,000 absentee ballots remain uncounted in Georgia.

Also hanging in the balance are an undetermined — but probably small — number of provisional and overseas military ballots that have yet to be counted.

For example, officials in Fulton County, the state’s most populous, had received fewer than 3,000 provisional ballots that may be “cured” when voters provide additional information.

In addition to a candidate-requested recount in Georgia, an election official who suspects a discrepancy or error in the count may also order a recount.

The next few batches of votes to be counted could vault Biden past Trump in pivotal Pennsylvania. That raises a politically fraught question for the TV networks: When would they call the race?

After Joseph R. Biden Jr. pulled narrowly ahead in Georgia on Friday morning, the focus shifted to Pennsylvania, whose 20 electoral votes could lift Mr. Biden decisively above the 270 he would need to become the next president.

By 7 a.m., with 95 percent of the state’s votes counted, President Trump led by roughly 18,000 votes. But tens of thousands of ballots were waiting to be counted, mostly from predominantly Democratic areas.

Among the biggest remaining batches of votes to be reported — roughly 54,000 — will come from Philadelphia, where the city commissioner, Al Schmidt, said in a televised interview early Friday that the count was continuing and updated vote totals would be released later in the morning.

Election workers briefly paused the counting in Philadelphia on Thursday because of litigation, Mr. Schmidt said. He added that election observers from both campaigns had been watching the count since Election Day, and that election workers had so far counted roughly 306,000 of the city’s 360,000 mail-in ballots.

By The New York Times

Some of the president’s supporters marched through Miami on Thursday night, as others engaged in a tense standoff with an anti-Trump protesters outside a government building in Phoenix. Arizona election officials were inside, counting votes through the night.

If Biden’s lead holds in Georgia, he will be the first Democrat the state has backed in a presidential race since Bill Clinton in 1992.

Some counties sent election workers home overnight, but those in Clayton counted through the early morning, the reason the county was responsible for pushing Mr. Biden into the lead in Georgia.

Georgia would be a landmark political and moral victory for Biden. But its short-term importance is purely mathematical: if it holds, it would block Trump from reaching 270 electoral votes.

Joseph R. Biden Jr. has pulled ahead of President Trump in Georgia, a state with 16 electoral votes that would bring him to 269, or within one electoral vote of the presidency, if he were to win. If Mr. Biden wins Georgia and then Nevada or Arizona — both states in which he is leading — or Pennsylvania, where the continued counting of ballots is methodically erasing Mr. Trump’s advantage, he will become the president-elect.

The candidates had been locked in a virtual dead heat for much of Thursday, with each controlling about 49.4 percent of the vote, but with Mr. Trump maintaining a slight lead. As absentee ballots were counted early Friday, Mr. Biden pulled ahead with 917 more votes.

Flipping Georgia, a state last won by a Democrat in 1992, and where Mr. Trump won by more than 200,000 votes four years ago, would represent a significant political shift. But the state has shown signs of trending blue: When Mr. Trump defeated Hillary Clinton in 2016, he did so by only five percentage points, a far slimmer margin than Republicans enjoyed in previous presidential elections.

Mr. Biden’s late surge in this year’s count — thanks to his dominance in Atlanta, Savannah and the increasingly Democrat-friendly suburbs around both — transformed what had seemed to be a safe Trump state in early tabulations on Tuesday into one of the closest contests in the nation.

At a drive-in rally in Atlanta last week, Mr. Biden said, “We win Georgia, we win everything.”

As dawn approached in the United States on Friday, Joseph R. Biden Jr. continued to inch toward the presidency by pulling ahead of President Trump in Georgia and chipping away at his lead in Pennsylvania.

In Georgia, a state that Democrats have not carried in a presidential election since 1992, Mr. Biden on Friday morning pulled ahead of Mr. Trump with 917 more votes, after trailing him by more than 18,000 at the beginning of the day on Thursday.

Georgia’s 16 electoral votes would bring Mr. Biden within one of the 270 he needs to become the president-elect.

In Pennsylvania, Mr. Biden trailed the president by 18,229 votes, with about 95 percent of the estimated vote reported. Should Mr. Biden win Pennsylvania’s 20 electoral votes, he would capture the White House outright.

With Mr. Biden gaining ground in those two states and widening his lead in Nevada, Mr. Trump on Thursday amped up his baseless attacks on the electoral process, saying that forces were trying to “steal” the election from him.

Appearing on Fox News, Mr. Graham, one of the president’s most loyal allies, called Mr. Trump’s allegations that ballots were being mishandled in Pennsylvania “earth-shattering” and said he planned to donate $500,000 to the president’s legal defense fund.

“I trust Arizona, I don’t trust Philadelphia,” he said of ballot-counting efforts in those states.

By early Friday morning in Arizona, newly counted ballots in Maricopa and Pima Counties had narrowed Mr. Biden’s advantage to about 47,000 votes.

Mr. Graham was among several Republicans — including Sen. Ted Cruz of Texas, Representative Kevin McCarthy, the House minority leader, and Representative Doug Collins of Georgia — who suggested on Thursday that something was off in the election.

But on the same day, 19 former United States attorneys — all of whom served under Republican presidents — countered Mr. Trump’s suggestions that it is somehow wrong to count ballots after Election Day. In a joint statement, they called Mr. Trump’s legal threats, claims of fraud and false declarations of victory “premature, baseless and reckless.”