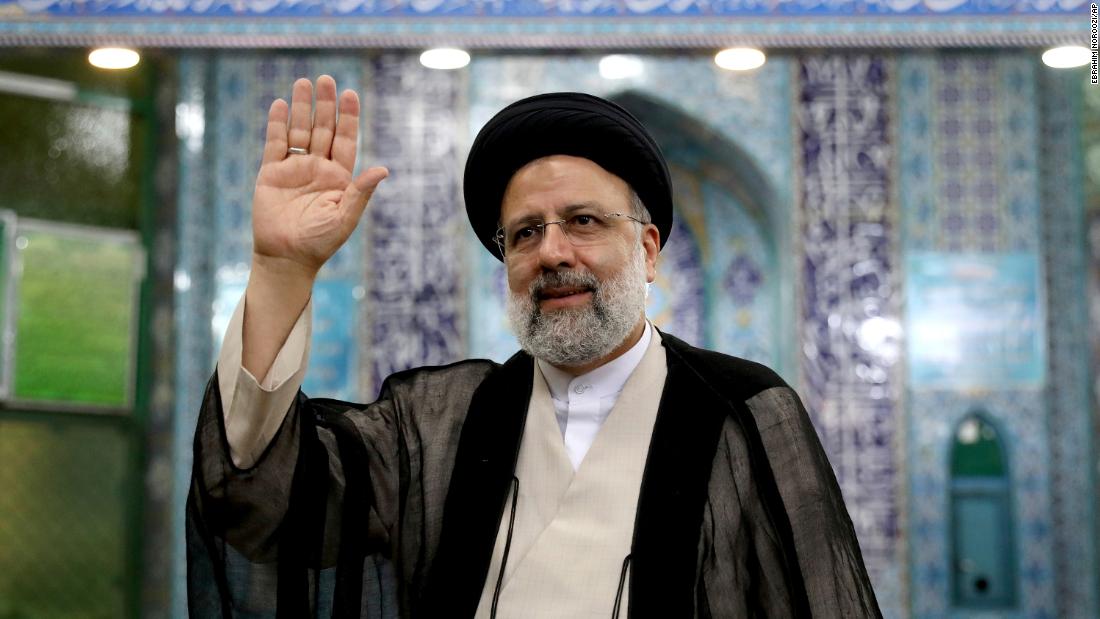 Raisi, who is currently under US sanctions, emerged as the frontrunner after an election supervisory body barred all of his serious rivals from the race. Analysts described the vote as the country’s most uncompetitive election since the establishment of the Islamic Republic in 1979.

With 90% of the ballots counted, voter turnout stood at around 48%, according to election officials. Far fewer voters turned up for this election, which was widely seen as a foregone conclusion, than they did in 2017, when turnout was over 70%.

President-elect Raisi will officially take office in 45 days, at which point he will become Iran’s eighth president. Until that time, Hassan Rouhani will remain acting president of Iran.

The election comes at a pivotal moment for Iran. The next government will have to confront an economic crisis exacerbated by the Covid-19 pandemic, and calls for constitutional reform. Tehran is also currently locked in negotiations with the United States about how to revive the 2015 nuclear deal.

The election of Raisi will further heighten speculation that he is being groomed to one day succeed his close ally, Ayatollah Ali Khamenei, as the Supreme Leader of Iran. Under the country’s political system, it is ultimately the Supreme Leader, not the president, who makes the final call on all major matters of state.

Despite numerous pleas by Khamenei urging people to vote, large swathes of Iranian society steered clear of the country’s polling stations on Friday. The preliminary tally showed that the overwhelming majority of votes went to conservative candidates, indicating that more reform-minded Iranians boycotted the election.

Many activists accused the country’s clerical establishment of “selecting” rather than electing the country’s next president, objecting to what they saw as a heavily engineered election designed to further entrench the power of the country’s hardline clerical rulers, despite the public’s calls for reforms.

Raisi largely campaigned on an anti-graft platform — an apparent bid to appease voter frustrations with a flailing economy blamed on crippling US sanctions and government corruption.

For most of his career, however, he played a leading role in the prosecution of Iran’s political prisoners.

In 1988, Raisi was part of a four-person “death panel” that allegedly oversaw the mass execution of up to 5,000 political prisoners, according to rights groups. His two years as Iran’s chief justice were marked by the intensified repression of dissent and human rights abuses. Amnesty International demanded on Saturday that he be investigated for alleged crimes against humanity over the deaths.

Raisi has never commented on the allegations, but it’s widely believed that he rarely leaves Iran for fear of retribution or international justice over the executions.

Raisi has long opposed engagement with the West, and repeatedly extolled the benefits of Iran’s so-called “resistance economy” that promotes economic self-reliance in the face of Western sanctions.

However, experts said his election was unlikely to affect the course of indirect negotiations with the United States on reviving the 2015 nuclear deal. Foreign Minister Javad Zarif said Saturday he expected that talks on returning to the terms of the deal would “most likely” conclude before the end of Rouhani’s term in August.

“The Vienna talks are going well and it’s likely that there will be an agreement before the month of August, but there are still obstacles,” Zarif said.

If talks spill over into Raisi’s tenure, they will largely rely on who the incoming president appoints as his foreign minister. In 2015, the success of the deal, which saw Iran place limits on its uranium enrichment program in exchange for sanctions relief, was largely attributed to Zarif.

But experts say Iran is unlikely to engage with the West beyond returning to the nuclear deal, satisfying itself with bolstering relations with Russia and China. It could also drop any pretense of democracy as it becomes less susceptible to Western criticism of its rights abuses in the aftermath of the possible restoration of the nuclear deal.

On Saturday, Russian President Vladimir Putin was one of the first world leaders to offer Raisi his congratulations. He expressed “hope for the further development of bilateral constructive cooperation in various fields, as well as interaction on international issues, noting that this is in the interests of the two countries,” Russian state media Ria Novosti reported.

There are more Realtors than homes for sale. Follow one trying to close his first deal – CNN Video

What we still don’t know about Beirut’s port explosion