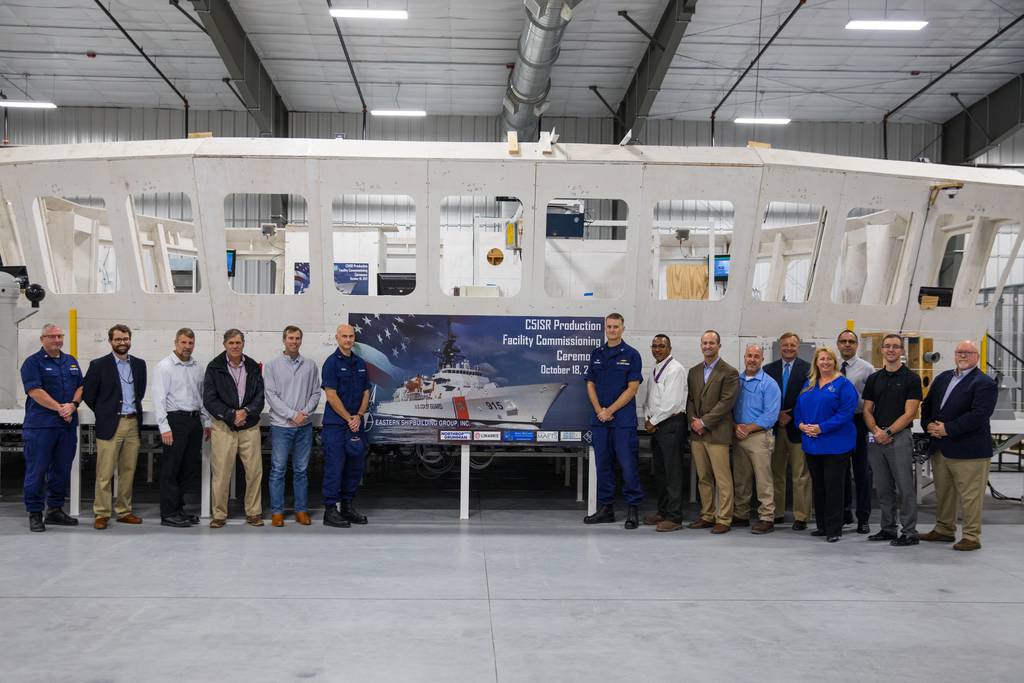 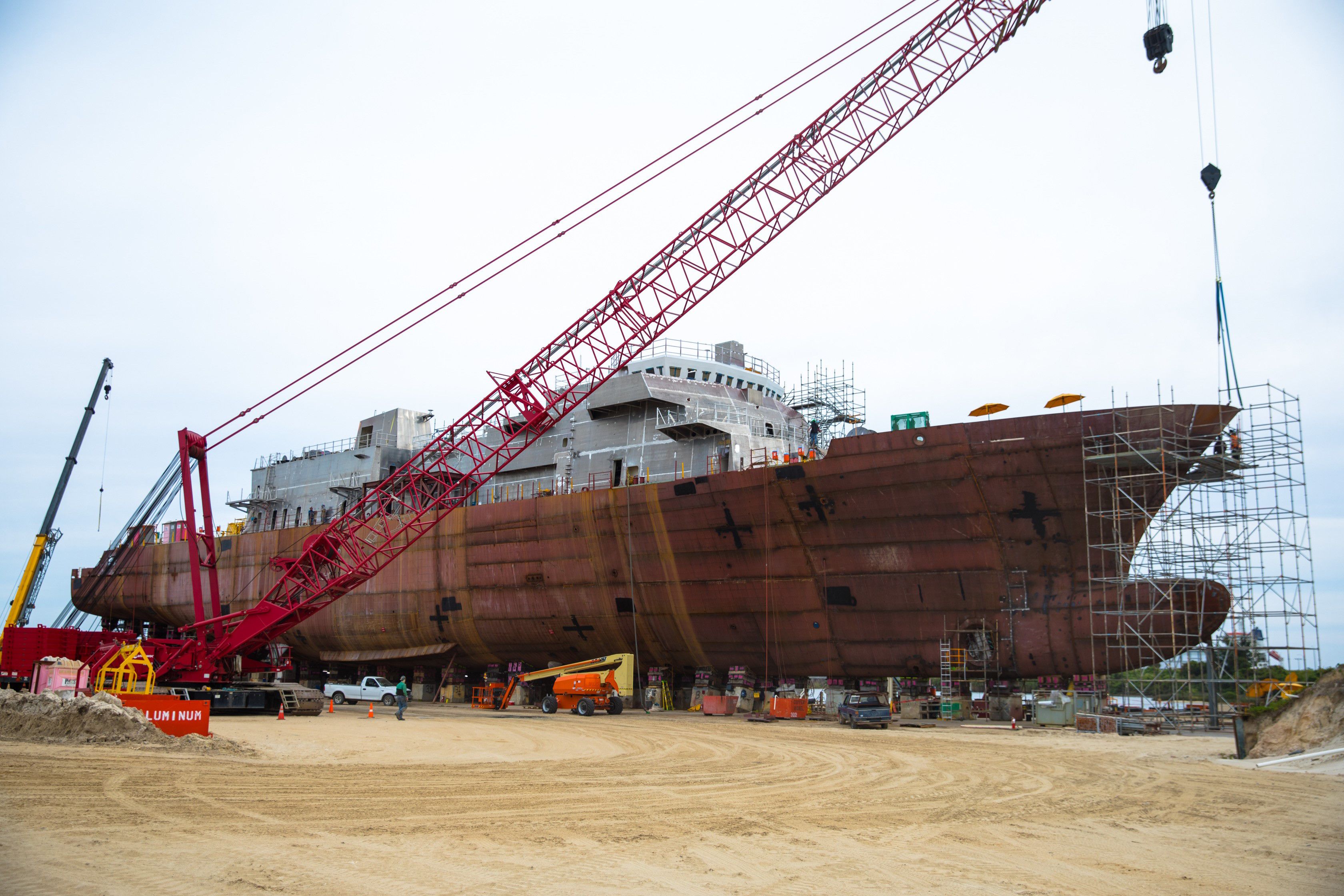 This OPC production facility is meant to reduce risk on what the Coast Guard calls its top acquisition priority. Within mockups of the bridge, the operations center and other key rooms, every piece of internal and external sensing and communications equipment will be networked together in this facility at Eastern’s Allanton yard first, tested for any integration hiccups and then sent up the road to the company’s Nelson Street yard where the OPC hulls are being constructed.

Ensuring everything comes together for the first time will be a challenge, with at least six companies making sure their pieces all fit together properly — but executives say doing so in this spacious facility will be much easier than troubleshooting once installed on the ship.

The facility will have other benefits throughout the life of the program, Leavitt and Eastern Shipbuilding Group President Joey D’Isernia told Defense News during an interview. This integration process will be repeated for every single ship in the class. The actual gear going on each ship will be fitted together at the production facility first — meaning any switch that gets replaced due to a vendor going out of business or any sensor that’s upgraded to bring in more capability will be tested for integration before it touches the ship hull.

Additionally, each cutter’s pre-commissioning crew can come out to the production facility and start getting familiarized with the gear while their ship is being built, reducing the time it will take for them to get trained and ready to go out on operations.

“It doesn’t just buy down risk day one, it buys down risk for the life of the program. And you may have a situation later on in life where you have equipment that goes out of date, or design revisions to that equipment. … Each time that happens, there’s a little bit of risk introduced. But then as you incorporate that equipment on the engineering side, you bring it in here, you physically test it, then you’ve bought down that risk once again,” D’Isernia said.

The Coast Guard is replacing two classes of medium-endurance cutters, the 30-year-old 270-foot cutter and 50-year-old 210-foot cutter, with the new offshore patrol cutter. The ship class is meant to bridge the gap between the national security cutter that operates in open oceans and the fast response cutter that will operate near the shoreline.

“While underway, Coast Guard cutter crews must have an accurate and timely picture of the maritime environment to effectively execute the wide range of statutory missions they conduct such as search and rescue, law enforcement, environmental protection and defense operations,” Capt. Andrew Meverden, the commanding officer of the U.S. Coast Guard Project Resident Office Panama City, told Defense News in a statement.

“Our crews rely the C5 systems being tested in the production facility, and ultimately installed aboard the Offshore Patrol Cutter, to produce actionable information, improve situational awareness and provide a means to efficiently share information among Coast Guard operators and other military and federal agency partners,” he added.

That means time is of the essence to get these ships out to the fleet — and the OPC Production Facility was designed with that in mind.

The 35,000-square-foot facility, which was completed in November 2019, employs 25 full-time personnel trained in electronics and cybersecurity. The Florida state government spent nearly $4 million to fully fund the construction of the production facility, the shipyard told Defense News.

At its most basic, D’Isernia said, the facility will catch problems earlier, while they’re easier to fix.

“Already the test facility has proven that it has significant value,” he said. “As we’re going through things, we’re finding things that need adjustment, we’re finding things that need a little bit of revision or change — which is healthy, that’s exactly what it’s intended to do. If we went through it and didn’t find anything, that’s when I’d be worried.”

Leavitt added that Coast Guard representatives have been on site for some of that early testing and have already gotten an early look at the setup of these command and control spaces in the mockups — some of which they’ve liked and some they haven’t.

“They looked at the bridge configuration, for instance, taking a look and saying, hey, is this the right way from an operator perspective? So it’s allowed the customer ahead of time before it gets on the ship to be able to say, that is going to work, that’s not going to work,” he said.

There’s still time to change things up, he said, so getting Coast Guard feedback now means the ship can be better tailored to how it will be operated.

D’Isernia, whose father, Brian, founded Eastern Shipbuilding Group and made a name for the company building custom fishing boats, said the Coast Guard is a unique customer in that it’s willing to spend money up front to save time and money down the road.

“When you get to the stages of testing this equipment on a vessel, you have hundreds and hundreds of highly paid individuals on the clock,” he said. “That includes the Coast Guard folks, all your different commissioning technicians from all your industry partners, the entire shipyard workforce that’s on the boat.”

With so many industry partners coming together to create this state-of-the-art C5I system, industry representatives agree it would be easy for integration challenges to arise.

Tammy Beck, the director of program management at Hose-McCann Communications, which provides internal communications systems, explained one scenario during a tour of the room mockups at the production facility.

Her company has provided the first-ever IP-based public address and general alarm system, which taps into all the speakers and phones on the ship.

“What the production facility has done for us and the shipyard is it allowed other systems to be integrated now into our system — like the video distribution system is a great example,” she said. “Eastern is supplying the cameras, [Mid Atlantic Technical Engineering Services] designed the video distribution system, and all the cameras are connected to our [Power over Ethernet] switches, and then all the traffic goes through Northrop Grumman’s systems, their [unclassified local area network].”

Jon Letourneau, the OPC program manager at Eastern Shipbuilding and a former U.S. Navy officer with experience in shipbuilding and ship modernization, said he once oversaw a technical refresh on an amphibious ship — not the lead ship, but well into the class — and “it was a nightmare because everything was being integrated in real time on the ship during construction, and it was an epic failure.”

In comparison, he praised this facility’s ability to bring “all those systems of systems coming together, talking to one another, working with one another.”

D’Isernia said the idea of having a production facility for integration was the Coast Guard’s, but the idea to locate it at the shipyard — as opposed to at a Northrop Grumman facility in another state, for example — was Eastern Shipbuilding and its industry partners’.

“That’s a big differentiator for us. We took that into the proposal, along with our team members Northrop Grumman and others, and here we are today,” he said.