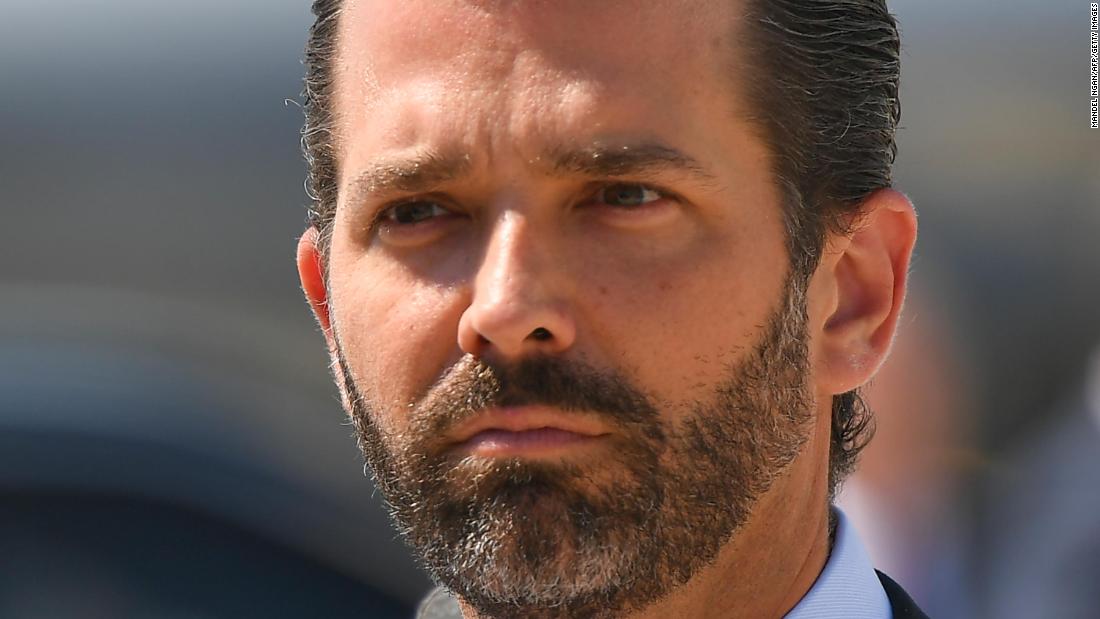 “Don tested positive at the start of the week and has been quarantining out at his cabin since the result,” the spokesman said. “He’s been completely asymptomatic so far and is following all medically recommended COVID-19 guidelines.”

In a video posted to Instagram later Friday, Trump Jr. confirmed he tested positive, said he was “totally asymptomatic,” and added that “out of an abundance of precaution, I’ll quarantine.”

“I’ll follow the regular protocols. You know, take it seriously,” he said. “No reason to do anything otherwise, but again totally asymptomatic, which is what’s weird about it.”

Trump Jr. becomes the latest figure close to the President to test positive for Covid-19. In addition to himself, first lady Melania Trump, his youngest son Barron, his chief of staff Mark Meadows and a number of other top aides both in his campaign and in the White House have tested positive in recent months.
Trump Jr.’s girlfriend, Kimberly Guilfoyle, also tested positive for the virus over the summer as the duo campaigned for Trump throughout the country.

On Friday, Trump Jr. said he found out he was positive for Covid-19 after getting tested ahead of a planned trip with his son and that he would continue to follow safety protocols for now, and “maybe get another couple tests” to see if he will be able to spend the holidays with his family.

The President on Saturday updated his Twitter followers on his son’s condition, saying that “my son Donald is doing very well.”

Trump Jr. was among the roughly 250 guests who attended the White House’s indoor election night party, where nearly every attendee was seen not wearing a mask. Other party attendees have since tested positive, including Meadows, Housing and Urban Development Secretary Ben Carson and White House political affairs director Brian Jack. A source familiar with the matter had told CNN at the time that all guests were to receive a rapid test for Covid-19.
One prior White House celebration has already been deemed a “superspreader event.” Several guests tested positive for Covid-19 after attending a nomination ceremony in late September for Supreme Court Justice Amy Coney Barrett, where attendees commingled, shook hands and few wore masks.

The White House says it constantly tests those around the President and Vice President Mike Pence, but officials often take a lax approach to following US Centers for Disease Control and Prevention’s guidelines to wear a mask and social distance.

Trump Jr. has spread a significant amount of misinformation about the coronavirus. Late last month, he told Fox News that the number of deaths from Covid-19 is “almost nothing” at a time when 228,000-plus Americans had succumbed to the virus.
Over the summer, his Twitter account was restricted for sharing a video that spread false information about the drug hydroxychloroquine and he shared a Facebook meme spreading doubt about the effectiveness of masks against the coronavirus.
The news comes as Covid is spreading throughout the country, with daily case records being set nearly every day in November, and is also spreading throughout Washington’s halls of power. Two Republican senators, Rick Scott of Florida and Chuck Grassley of Iowa, have announced in the last few days that they tested positive and to this point 26 House members and 10 senators have so far tested positive or been presumed positive since the beginning of the pandemic.

This story has been updated with additional information.

What to Cook This Weekend