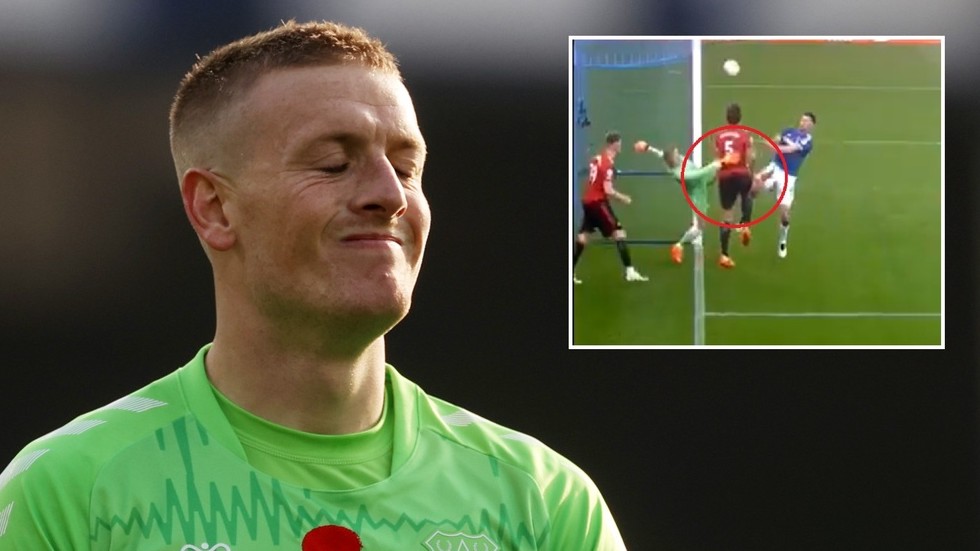 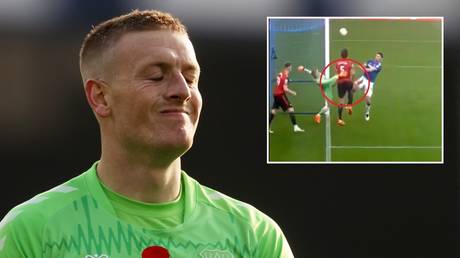 Only three weeks after the Merseyside Derby, when he was widely vilified for clattering into Virgil van Dijk, injuring the center-back’s knee and potentially sidelining the Liverpool talisman for the rest of the season, the controversial England Number One was at the center of another storm.

“Jordan Pickford thinks it’s UFC,” raged one Twitter user, “he kicks Harry Maguire full pelt in the stomach, but no penalty has been given? Sound.”

Jordan Pickford thinks it’s UFC, he kicks Harry Maguire full pelt in the stomach, but no penalty has been given? Sound.

Attempting to claim a United cross, Pickford – as has become a familiar sight for Everton fans – misjudged his advance and ended up spilling the ball into the path of Maguire.

The defender sought to direct the ball towards goal, but Pickford – in yet another show of rashness – swung a leg at his England teammate, making hefty contact in the process.

It was yet another incident that, in this age of countless camera angles and the Video Assistant Referee, went inexplicably unpunished, with Pickford again evading justice.

Official Michael Olivier, who was involved in both the incident in the Liverpool game and Pickford’s latest indiscretion, opted not to award a foul against the keeper on either occasion.

Cricketer Michael Vaughan was one of the countless Twitter users to air their fury with the decision on social media.

“How is that not a penalty!!?” he wrote on his @MichaelVaughan handle. “VAR can’t work if the people operating the systems do not understand the game…”

How is that a not a penalty !!?? VAR can’t work if the people operating the systems do not understand the game … #Fact#EVEMUN

Some opted for a more light-hearted take on Pickford’s farcical display, likening him and hapless television ‘personality’ Mr. Blobby, whose performance on this daytime television show was uncannily resemblant of the goalkeeper’s showing at Goodison Park.

Does Jordan Pickford have diplomatic immunity or mob connections or something

Speaking after the match, United coach Ole Gunnar Solskjaer also expressed his displeasure at the game’s officials, although this time, it was the fixture scheduling and not the lack of punishment for Pickford that was the focus of his ire.

“We were set up to fail, the kick-off time set us up to fail,” he told journalists after the match.

“We’ve been to Turkey [the midweek Champions League defeat by Istanbul Basaksehir], played loads of games this season already, we got back Thursday morning and we are playing Saturday lunchtime, it’s an absolute shambles.

“These boys deserve better,” he added. “Luke Shaw has got injured because of it. It’s a hamstring which might be a long one and Marcus Rashford might be struggling.

“The authorities set us up to fail, who is responsible? We’ve had enough of that.

“Players this season, in these times, a pandemic, mentally and physically, it’s draining,” the Norwegian boss concluded. “Let’s play on a Sunday, there’s an international break after this, it’s a joke.”

Also on rt.com
Stay of execution: Embattled Man United boss Solskjaer gets much-needed Premier League win, but is it delaying the inevitable?


Next up for United, they host West Bromwich Albion after the international break, before the return fixture against Istanbul Basaksehir as they look progress from their Champions League group.