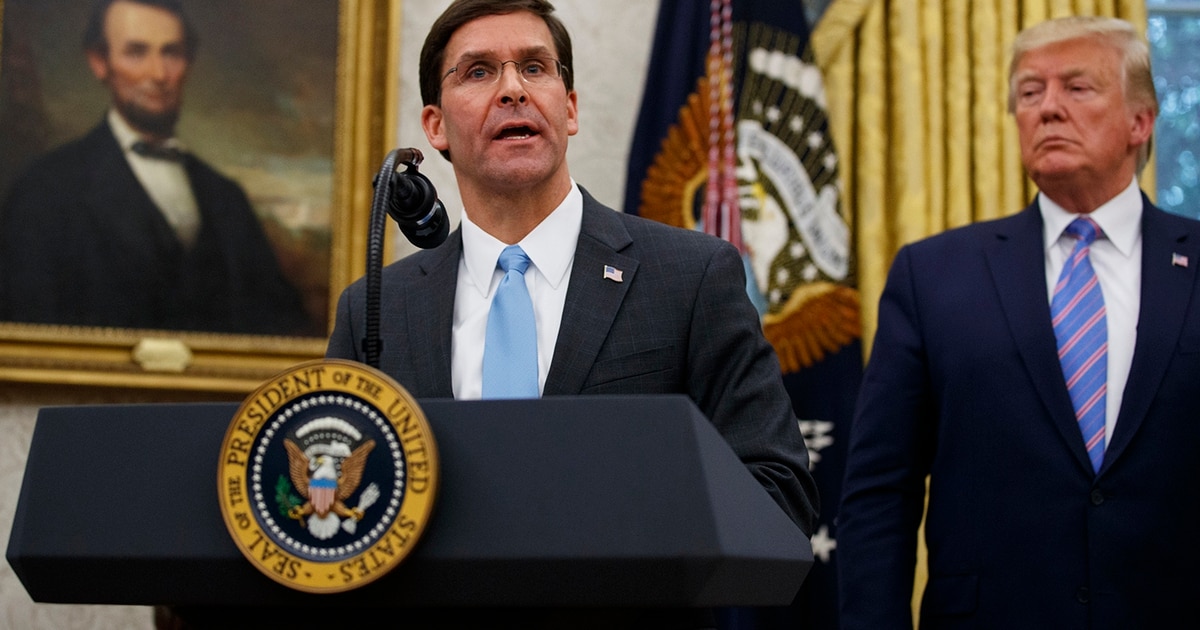 House Armed Services Committee Chairman Adam Smith, D-Wash., was among lawmakers who warned the action would inject more uncertainty and risk into the country’s rocky transition to President-elect Joe Biden, whose electoral victory Trump has disputed.

“Dismissing politically appointed national security leaders during a transition is a destabilizing move that will only embolden our adversaries and put our country at greater risk,” Smith said in a statement. “President Trump’s decision to fire Secretary Esper out of spite is not just childish, it’s also reckless.

“It has long been clear that President Trump cares about loyalty above all else, often at the expense of competence, and during a period of presidential transition competence in government is of the utmost importance.”

With two Senate races that will determine which party controls the upper chamber headed to run-offs in January, and Trump contesting the election results, Congress’ lame-duck session looks like it will be a continuous partisan battle. Beyond the practical concerns surrounding the firing, it has opened an avenue of attack against Republicans on national security and the administration’s pandemic response that some congressional Republicans had hoped to avoid.

“Trump said at the last [presidential] debate that the military will distribute a COVID-19 vaccine. Today he fired his [defense] Secretary,” Massachusetts Democratic Sen. Elizabeth Warren, a SASC member, said in a tweet. “I want to know what’s going on at the Pentagon and make sure that Trump’s actions aren’t jeopardizing our pandemic response.”

Amid the speculation about Esper’s imminent departure over differences with Trump, Senate Armed Services Committee Chairman Jim Inhofe, R-Okla., and Senate Majority Leader Mitch McConnell, R-Ky., were among Senate leaders who pressured the White House in recent weeks to keep Esper in place, Politico reported. McConnell’s office did not immediately respond to a request for comment.

Inhofe, in a statement Monday, wasn’t critical of Esper’s firing and didn’t mention the presidential transition. He did thank Esper for, “prioritizing implementation of the National Defense Strategy, for thinking critically about how the Pentagon operates, and for always putting our service members first.”

“I just spoke with Acting Secretary of Defense Miller, and I look forward to working with him to ensure that these priorities remain paramount and to working with President Trump to maintain stability at the Pentagon, particularly as we work to enact the 60th annual National Defense Authorization Act.”

Esper’s strained relationship with Trump came close to collapse last summer during civil unrest that triggered a debate within the administration over the proper role of the military in combating domestic unrest. Esper’s opposition to using active-duty troops to help quell protests in Washington infuriated Trump and led to speculation that the defense chief was prepared to quit if faced with such an issue again.

Speculation Trump would somehow involve the military in the presidential election prompted Chairman of the Joint Chiefs of Staff Gen. Mark Milley to hold an unusual off-the-record video call with top generals and network anchors prior to Election Day to dispel the idea of a role for the military in adjudicating a disputed election or making any decision around removing a president from the White House.

Some Democrats seemed to touch on those fears Monday.

Michigan Democratic Rep. Elissa Slotkin, a former Pentagon official and one of the party’s lead voices on national security matters, made a direct appeal to Miller, with whom she worked during her time at the department.

“It is critical that he, and all senior Pentagon leaders, remember that they swore an oath to the Constitution, not any one man. With that oath comes a commitment to the peaceful transition of power,” Slotkin said in a tweet. “All leaders must decide what they will do in the next 72 days. I strongly urge Acting Secretary Miller to remember that the country and the military he has dedicated his life to are counting on him to do the right thing.”

Along similar lines, House Armed Services Committee member Rep. Seth Moulton, D-Mass., said Monday in reaction to Esper’s firing: “I hope that President Trump does nothing in the next 11 weeks that puts Gen. Milley and the Joint Chiefs of Staff in a position where they will need to make a partisan decision on a civilian, political matter.”

“Joe Biden is President-elect, and it’s past time for Republican leaders to step up and explain that reality to President Trump before [Trump] takes further rash and attention-seeking acts that damage America,” he said in a statement.

House Majority Leader Steny Hoyer, D-Md., expressed confidence that Biden’s eventual announcement of his national security team, “will reassure our military and our allies ― and put our adversaries on notice ― that America is ready to meet any threat.”

“Even as a lame-duck president, Donald Trump continues to put our country in danger,” Hoyer said in a statement.

On Monday, after Trump tweeted that Esper was “terminated,” Republicans were largely muted, though at least one announced support for the move.

“Congratulations to Christopher C. Miller for being nominated as the Acting Secretary of Defense. I am grateful to [Trump] for choosing such a qualified defense leader,” South Carolina Rep. Joe Wilson, who sits on the HASC, tweeted.

“Mark Esper has served the nation well under very challenging circumstances. He has helped lead the Department of Defense toward being more efficient and better prepared to deter peer adversaries,” Thornberry said in a statement. “He has been an effective advocate for the men and women in uniform and their families. He deserves the gratitude of every American.”